Purdue has won five out of the last six Big Ten games, including a 49-20 victory over then-No.2 Ohio State. 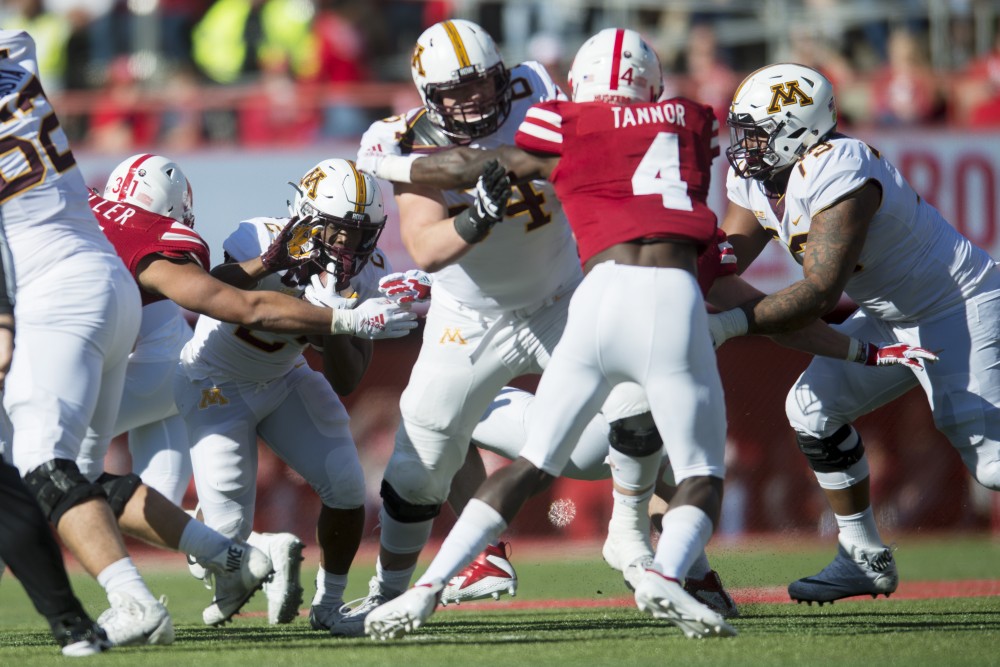 Running back Mohamed Ibrahim carries the ball on Saturday, Oct. 20 at Memorial Stadium. Nebraska defeated the Gophers with a final score of 53-28.

Another veteran running back down for the season and a new defensive coordinator means more change for the Gophers.

Former defensive coordinator Robb Smith was fired, replaced by former defensive line coach Joe Rossi. Running back Shannon Brooks, who played in his first game of the season against Indiana, is out for the season.

The simple question after these developments is: How will the team respond against Purdue?

Minnesota’s leading rusher has been freshman Mohamed Ibrahim this season, since the team has been without Brooks and other veteran Rodney Smith. Ibrahim ran 107 times for 570 yards and five touchdowns in the six games he was healthy enough to play this year. Other than Ibrahim, the Gophers look to freshman Bryce Williams, who is second on the depth chart.

The Gophers currently rank in the bottom half of the Big Ten, with an average of 154 rushing yards per game. Purdue’s rushing defense ranks fourth in the Big Ten.

When Purdue runs the ball:

Last week, in a close game against then-No.16 Iowa, Purdue’s offense tallied 38 points to beat the Hawkeyes in a 38-36 shootout. Purdue mustered 101 total rushing yards on 31 carries. Leading rusher D.J. Knox was held to 34 yards on nine carries in the close victory.

Purdue is ranked one spot better than Minnesota’s rush offense in the Big Ten, averaging 155.6 rushing yards per game.

The Gophers gave up 430 rushing yards and five rushing touchdowns to Illinois last week. With a new defensive coordinator, the Gophers will look for a positive change to the third-worst rushing defense in the Big Ten.

With a new quarterback in the fold, Tanner Morgan, and three capable wide receivers — Tyler Johnson, Rashod Bateman, and Chris Autman-Bell — the Gophers have used the pass game more effectively than the crippled running attack. Minnesota tallied 260 passing yards and two touchdowns against Illinois last week, though both receiving touchdowns came when the game was out of reach.

On the other hand, the Boilermakers rank last in the Big Ten in terms of pass defense. Though they have played five of the top seven passing teams in the Big Ten (themselves being second on the list), they have given up an average of 296.4 passing yards per game.

When Purdue passes the ball:

The Boilermakers had four touchdowns and 333 receiving yards against Iowa to put them past another ranked opponent. They have upset three ranked opponents this year, first against Boston College in a 30-13 victory and then a huge 49-20 upset win over then-No. 2 nationally ranked Ohio State.

Quarterback David Blough has been accurate this season, throwing 66 percent in his 311 pass attempts, good for 2,683 yards and 17 touchdowns. Blough passes to receiver Rondale Moore most often. Moore averages about 93 receiving yards per game.

The Gophers have an inexperienced group of defensive backs, and rank in the middle of the Big Ten in terms of passing yards allowed on average this year.

A high-scoring game is likely between these two teams because each ranks near the bottom in terms of giving up yards on defense. Pair this with each team’s ability to throw the ball and find explosive, high yardage plays, and something like the Illinois game may be expected for the Gophers.

Purdue is on a roll, defeating five of its last six opponents, while the Gophers have lost five of the last six games.