This year’s festival hinted at the best and worst to come. 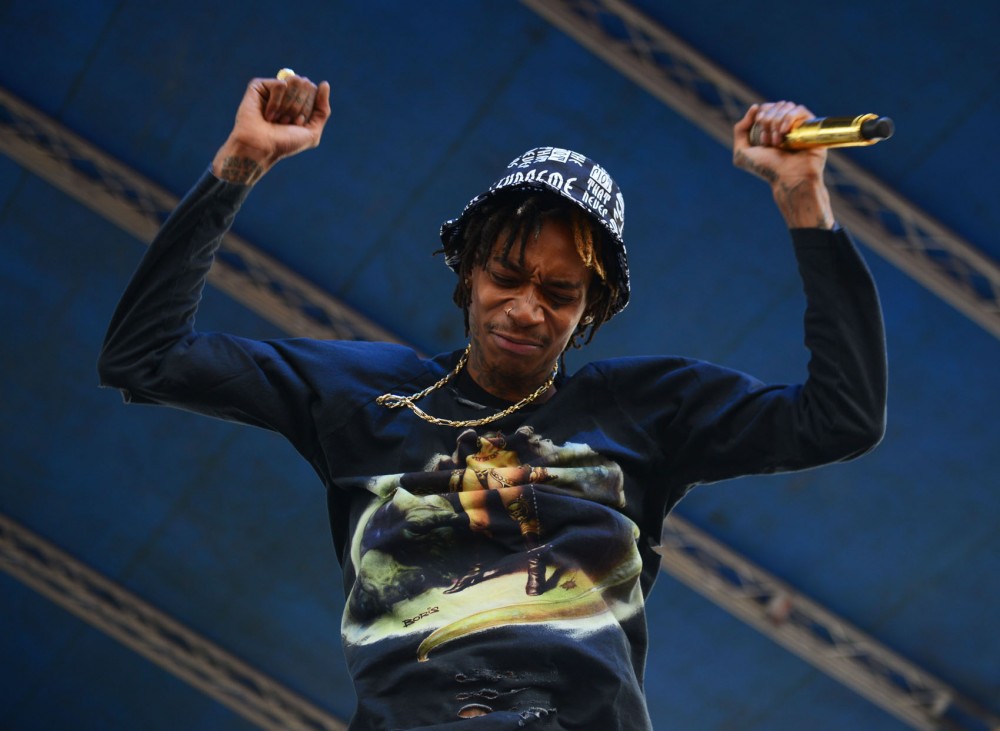 Wiz Khalifa performs at Soundset at Canterbury Park on Sunday. Wiz Khalifa's appearance was a relief for fans after worries that he wouldn't make his set because of an early morning arrest in Texas.

In 2008, the first Soundset hip-hop festival was held at the Metrodome parking lot, drawing some 13,000 people.

Last Sunday, the same festival brought 30,000  to Canterbury Park’s Festival Fields in Shakopee, Minn. for arguably the biggest lineup in the event’s seven-year history.  It’s still homegrown from Rhymesayer’s stock, yes; but far from the grassroots vibe of the early years — $7 drinks tell that tale.

Soundset was an upstart, a weed growing from the cracks in Hubert Humphrey’s asphalt.  But the power of the weed is not to be underestimated as festival organizers have proven.

Wiz Khalifa knows the feeling of that clout and urgency.  He was arrested Sunday morning on marijuana charges in Texas and tweeted from a holding cell, but he was able to post bail and make his set time without another problem. A podunk festival wouldn’t have merited that type of “where’s-the-private-jet-I-just-posted-bail” mentality. He turned in a stellar performance, but like most years, last Sunday was a mixed bag.

Speaking of growing weeds, holy up in smokes, there was a lot more marijuana around this year. But it was a fitting environment for a lineup that repped the drug consistently.  Sans green odor, that festival would have felt like a showing of “Rocky Horror” with the attending audience wearing nothing but tuxes.

It lent to a convivial, if slightly sinister, atmosphere aided by the palpable excitement of nearly all performers on the main and the two smaller stages.

Returning host Sway, of MTV News fame, channeled that aura inadvertently, coming on stage midday with an already hoarse voice that only got worse.

That set the early tone.  Local emcee Dem Atlas took those party reins in good cheer and crusaded through a goofy noontime set that saw him egg on the crowd with a baseball bat, smash a guitar and sing a crude “lullaby.”

Fellow local and the Kaiser of Powderhorn, Prof, brought more heat to the already warm, dusty day.  A Loki figure in the Rhymesayers canon, Prof knows how to party and has proven it again and again with his gampo stylings.  The crowd got it, fully embracing the burst of confetti and inflatable novelty products chucked into the crowd during Prof’s set.

Then there was Nas celebrating the 20th anniversary of “Illmatic.”  Hearing that album in its entirety left no doubt why it’s an iconic entry into the annals of hip-hop mythos.

But Soundset wasn’t all bouncing beach balls and classic tracks.

An entertaining festival, especially one that sports a whole genre, relies on balance.

Soundset achieved that, but to its own detriment.  Rap is based on flow, but the lineup arrangement didn’t have any.

The aforementioned Prof was followed by a heralded set from Chicago’s Chance the Rapper.  His backing band brought the added flair only live accompaniment can, but his laid-back acid rapping ruined the charged aura Prof left in his wake, the equivalent of chugging a pot of black coffee mixed with a liter of Jameson followed by a lovely croissant and a sunny joyride.  They just didn’t gel.

It got even worse when Earlwolf rode in on Chance’s coattails.  Tyler, the Creator and Earl Sweatshirt’s juvenile barbs and callous presence represented another disproportionate about-face.

That sequence embodied the day.

Is it better to spend more time at the smaller Canterbury venues to catch the next potential Nas, or post up at the main stage and actually watch Nas?  Tough call.  But if the desire was a poignant and intimate set that offered a bit more than fun, you had to be at the Fifth Element tent — or occupied with a porta-potty tryst.

Everybody there loved ugly when it came to Atmosphere, but there was plenty to find problematic.

On the organizational side, Soundset is still a mess.  There were ticket snafus left and right, the expected lack of cellular and Internet access, and another set of ATM problems.  Plus, the cancellation of Pusha T’s performance is still a mystery.  Wiz’s absence would’ve compounded the problem, but Pusha was still a tremendous letdown.

He would have, hopefully, helped cover up some of the heinous performances from well-known names like 2 Chainz and Cypress Hill.

B-Real and the boys just didn’t have it, the only highlight an extended Latin percussion solo toward the end of the set.  The refrain “crazy insane, got no brain,” hit a little too close to home.

And 2 Chainz — he’s just not good live, more hype man to himself than actual performer.  He frequently left the show in the hands of the DJ, interjecting his own name and crowd rousing banter more often than verse.

That said, Top 100 hits played to an inebriated crowd of thousands is a rousing spectacle, a festival experience best summed up by previous Soundset performer Greg Grease.