Editor’s note: This story is the first in an occasional feature that will profile community businesses during a recession. 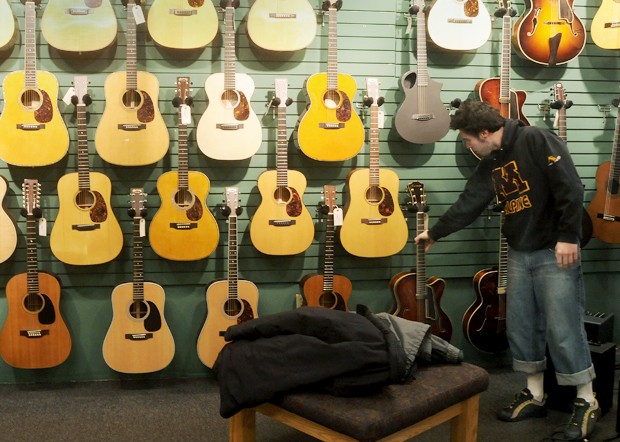 A customer shops for instruments in the basement level of The Podium, a family-owned Dinkytown guitar shop open since 1959.

While many small businesses in Dinkytown are being forced to close because of the declining economy, one guitar shop isnâÄôt worried. Aside from having to cancel orders for very expensive guitars and replacing them with more affordable ones, The Podium Premium Guitars and Sheet Music owner Jeff Molde said the economy has not hurt the business. âÄúAt least so far, knock on wood, we arenâÄôt being hurt by the economy,âÄù Molde said. The Podium, a store that specializes in acoustic guitars and sheet music sold locally, nationally and internationally, was founded in 1959 by Lynn and Paulette Thompson, a couple who met in Paris, married and moved to Minnesota in 1953. Lynn was a jazz trumpeter and bass player, while Paulette was a young singer and actress in French cabarets. Lynn has played with world-renowned jazz artists such as Tadd Dameron and James Moody. The Podium was originally called The Podium Music and Tobacco , and contained pipes and tobacco in the front, with classical sheet music in the back, Molde, who has worked at the store for 10 years, said. At the time, the store specialized in obscure European publishers, particularly opera, and sold for opera companies and enthusiasts all over the place, he said. After moving to Minnesota, the ThompsonâÄôs opened a bar called The Purple Goblet . Molde said the Goblet was the first âÄúbeatnikâÄù kind of a joint in Minneapolis, featuring poetry reading, classical music, jazz and a lot of political discussion. When the ThompsonâÄôs sold the Goblet, they used the money to open the Podium in Dinkytown. They opened their shop across the street from The Ten OâÄôclock Scholar , a place Molde calls âÄúa legendary coffee shop in Dinkytown where a lot of great musicians started.âÄù The Podium began selling sheet music, but then started to add acoustic guitars. Shortly after, patrons from the Scholar started coming to the Podium regularly to hang out or purchase the occasional set of strings. Artists such as Bonnie Raitt and Bob Dylan frequented the Scholar and the Podium. Molde said Dylan walked into the Podium in 1962 looking for Martin Guitar Company strings. At the time, the owner didnâÄôt sell strings, so he became an authorized Martin dealer and then began selling high-end acoustic instruments. Dylan got his Martin guitar strings, and became a regular at the Podium before moving to New York to make his name. âÄúSince the folk boom was just starting, selling guitars seemed like a good idea,âÄù Molde said. âÄúWe had to give him most of the strings, because he didnâÄôt have money.âÄù In 1974, when Dylan was in town to record his “Blood on The Tracks” album, the store lent him a vintage Martin guitar, and members of the Podium staff were featured as his backup band during the recording of his album, Molde said.

Feeling the economy
Frank Spencer , Podium sales associate, has been working at the store for two years, but said he has been a customer for much longer. He said the economyâÄôs effects were âÄúsomething we saw coming last year.âÄù As a result, Spencer said the store made necessary adjustments in the way they do business âÄî such as selling less expensive guitars âÄî but said he believes the store is doing well thus far. âÄúI think that we are weathering the storm fairly well,âÄù Spencer said. âÄúIâÄôve talked to colleagues around the country and itâÄôs sort of the same story everywhere: things are down a little bit.âÄù Molde said he sees buying a guitar as a good investment because it offers unlimited entertainment for a one-time cost. âÄúFor a lot of people, itâÄôs not just a fancy car or more crap for their house, but it is having a great guitar or musical instrument,âÄù Molde said. Spencer said guitars at The Podium range from $169 to $9,000. More expensive guitars, he said, have not been selling because âÄúguitars at that price point have very specific customers and a very small niche of people that look at those instruments.âÄù Spencer said the people that walk through the doors of the Podium range anywhere from struggling artists to people of international acclaim, people passing through on their tour bus, students, teachers, doctors, lawyers, adding âÄúeveryone has a different story.âÄù âÄúWe are still sort of a âÄòMa and PaâÄô shop in a store that is a small brick-and-mortar store but also has an international presence,âÄù Spencer said. âÄúWe sell guitars all around the world, so itâÄôs the best of both worlds.âÄù Molde said generally the Podium offers lessons for beginning students, but aims to take on more experienced guitar players. Sales associate David Roos has worked at the Podium since 1986. As a jazz guitarist, Roos said the PodiumâÄôs rich history makes the store unique. This year marks the 50th anniversary of the Podium. The business wanted to celebrate by making two guitars âÄî a Martin OO and a Dreadnought . Because Martins were the first instruments the store carried when the store opened, the Podium worked with people at the Martin custom shop in Nazareth, Penn. to build the anniversary guitar. The Martin OO has been available for the last six weeks at the cost of $2899. The Dreadnought costs $3195. Looking into the future, Molde said he expects there will always be a market for guitars. âÄúEven when everything is going to hell in a hand basket, people are thinking âÄòokay, what do I really want?âÄôâÄù he said. âÄúA lot of times, itâÄôs just a nice guitar.âÄù