John Carlson was promoted to lead the Gophers after serving as an assistant in 2011. 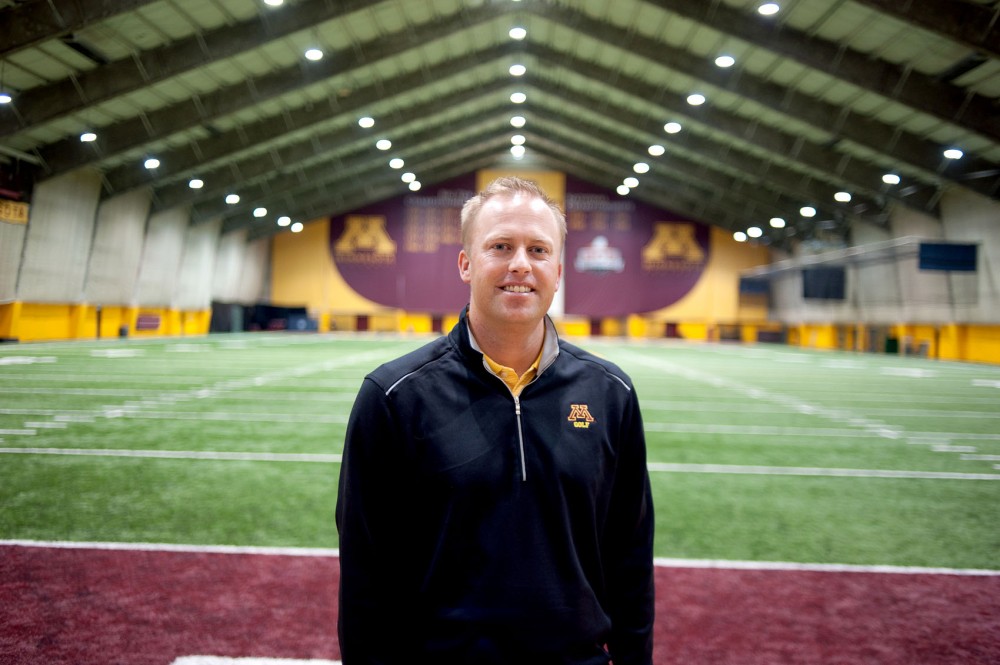 John Carlson helped improve the Gophers men’s golf program last year as an associate head coach. This year he’s at the helm and has bigger plans.

“I think in the level of coaching and the level of teaching the bar has been raised at the U,” Carlson said. “The players have matured and we keep getting in-and-out players that can compete right away as freshmen.”

Prior to joining the Gophers’ coaching staff last season, Carlson spent three years at the Wayzata Country Club in Wayzata, Minn., after a stint playing professionally.

“I decided that coming back to Wayzata Country Club as a teaching professional was the right thing for me and my family at the time,” Carlson said.

His credibility as a Division I golf coach comes from that five-year stint playing professionally on the Nationwide and National Golf Association tours. Carlson owns 14 career professional titles.

Carlson played college golf across the border at the University of Wisconsin. He was a four-year letter-winner for the Badgers, won collegiate events and was named Academic All-Big Ten as a senior in 2001. Academics were something that Carlson said he wanted to stress to the team when he was promoted to head coach.

“I wanted to change the discipline both on the golf course and off the golf course,” Carlson said. “We had a great academic first semester — it was the best in a decade for men’s golf. That was a big change for me.”

The Bagley, Minn., native said he got into golf to spend more time with one of his close friends.

“He lived right down the road, and if I wanted to hang out with him in the summer I had to go to the golf course,” Carlson said. “I ended up liking it — it was a sport that immediately I was at least competent at. And I just kind of worked at it at a nine-hole golf course all day, every day until I was a college freshman.”

Carlson said the jump from “competent” to playing at a high level came while he attended Wisconsin — a feat he credits to the Badgers’ coaching staff.

“I didn’t really have any role models … in golf. My parents don’t play a whole lot,” Carlson said. “I was a good player here in the state. I ended up being an All-American.”

Coaching runs in the Carlson family. Carlson’s dad coaches girls’ track and field at Bagley High School, which has won two of the last three Class A state championships.

“When I was at Wisconsin, I kind of thought [the coaches] had the coolest job in the whole world,” Carlson said. “And because of that I always thought, ‘You know what, maybe I would be a good coach.’”

Carlson said he made his decision to coach after receiving praise from the director of golf at the University of Southern California.

“He said [I] would be a good golf coach,” Carlson said. “I asked him why and he said, ‘Because you’re patient, you’re disciplined and you know how to teach the game.’

“From there I just decided that this is a good career path.”

Once he chose that path, he made an immediate impression on the Gophers.

“My first impression was that I really liked him,” junior Erik Van Rooyen said. “He’s very organized, he’s very positive with the team and he knows where he’s going with the team.

“We have an ultimate goal,” Van Rooyen added. “And every day we have goals on how to reach that goal.”

Van Rooyen’s teammate Tim Peterzen said he was impressed by Carlson’s experience as a player.

“We can relate to what he’s talking about because he was a player — a really good player — at all levels,” Peterzen said. “So when he would tell us stuff, we could believe him because he’s gone through it all.”

Peterzen said that Carlson still has the “mindset of a player,” and that it really helps his game to walk through the course with his coach.

Carlson said the team’s goal for 2012 is to finish in the nation’s top-50, earn an NCAA regional bid and “hopefully play well at regionals and get a finals bid.”

“This year’s team we have six juniors on the team along with a redshirt sophomore,” Carlson said. “I feel like coming off a second-place finish at the Big Ten Match Play certainly was a step in the right direction, but we have a lot of work to do because the tournaments that we play at the end of this year are all against strong competition.”