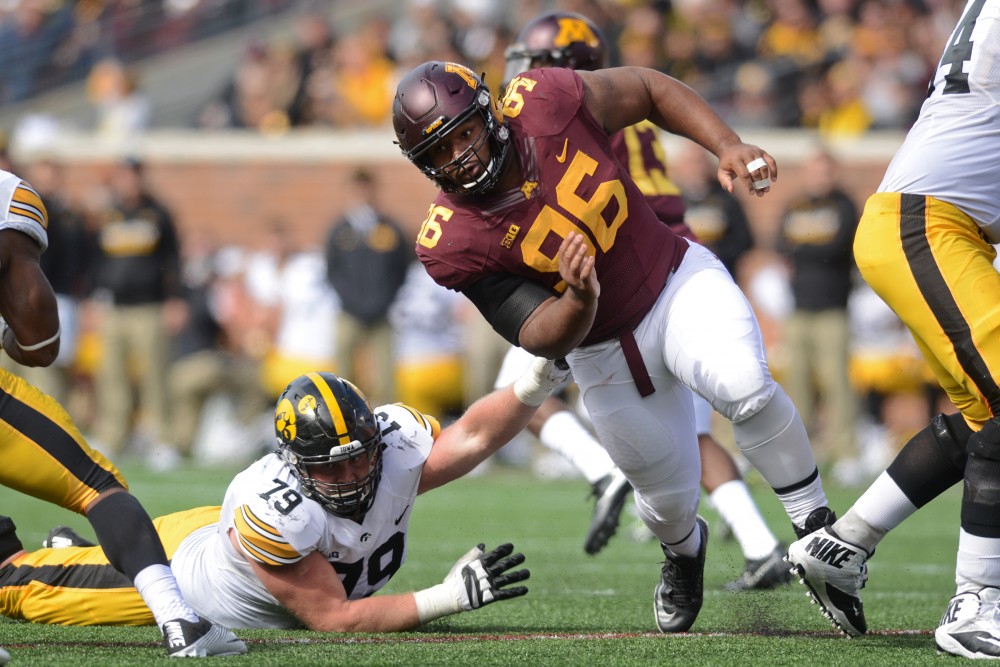 Minnesota’s (4-2, 1-2 Big Ten) Homecoming game against Rutgers (2-5, 0-4) will be by far its easiest conference game of the season. A full breakdown, prediction, and other notes can be found below.

The run game is Minnesota’s strongest part of its offense and possibly the best part of the entire team. Running back Rodney Smith is playing at an elite level and Shannon Brooks isn’t far behind.

The Gophers’ mobile quarterback Mitch Leidner is likely out again with a concussion for Saturday’s game, but it didn’t affect the Gophers ground game against Maryland. The group rushed for 229 total yards and scored two touchdowns. They are now fifth in the Big Ten in rushing yards per game and 35th in the FBS.

Rutgers’ rushing defense is horrendous. It is 123rd in the FBS in rushing yards allowed per game with 263.7, and have allowed 19 rushing touchdowns in seven games. Rutgers has been outscored 160-7 over their last three games, and that’s mostly due to its poor rushing defense. The Gophers may very well rush for season highs against the Scarlet Knights.

When Rutgers runs the ball:

Rutgers rushing offense is solid. Junior running back Robert Martin is seventh in the Big Ten in rushing yards per game and has been a bright spot for a struggling Rutgers offense.

Overall, the group has struggled at times this year but a lot of that can be attributed to tough competition. The Scarlet Knights have averaged 170.3 rushing yards per game this season. When the team isn’t facing a ranked opponent, that number rises to 237 yards per game. Quarterback Giovanni Rescigno runs the ball a lot and the team could see some big numbers Saturday.

Even so, finding consistent success on the ground will be difficult for Rutgers. Minnesota’s running defense has faced tougher rushing offenses — Iowa and Maryland — and has done a good job of limiting those teams. The Scarlet Knights’ ground game shouldn’t be ignored but Minnesota should contain them.

Quarterback Conor Rhoda only threw 15 pass attempts in his first career start against Maryland so a lot is still unknown about him. The Gophers mostly stuck to their ground game and that’s what they’ll probably do again.

Teams have mostly run the ball against Rutgers. Opponents average 45 attempts a game on the ground and only 23.9 passing attempts against the Scarlet Knights. They have only allowed 170.4 passing yards a game — 12th in the FBS — but that rank drops to 91st if you go by quarterback rating.

Don’t expect Minnesota to test Rutgers’ passing defense a lot this game, but that’s more due to the strength of Minnesota’s running backs. Rhoda’s play won’t be a factor in this game, unless he throws for more pass attempts then he did against Maryland.

When Rutgers passes the ball:

Rutgers has had quarterback problems this season, causing head coach Chris Ash to make a switch by benching Chris Laviano and starting Rescigno. Like Rhoda last week, he will be making his first career start.

Rescigno has just 18 pass attempts this season and 13 rushing attempts — all coming in his second career game against Illinois. He and his running backs will probably run a lot more then they will pass. Their best offensive player, wide receiver Janarion Grant, suffered a season-ending injury after four games and would’ve been a help to his team here.

Part of Rutgers’ plan for running more than passing will be due to Minnesota’s improved, and now-healthy secondary. The group has performed well after a rough start, grabbing four interceptions in their last two games after only getting one in their first four. Cornerbacks KiAnte Hardin and Ray Buford will be out after restraining orders were served to them Friday, but it probably won’t impact this game all that much. Freshman Antoine Winfield Jr. has already been an important part of the group’s overall performance.

Rutgers won’t have a chance to win this game, as it probably won’t ever be close. Minnesota will improve to 2-2 in the Big Ten and get a win on Homecoming at TCF Bank Stadium.

Around the web on the Gophers and the Scarlet Knights:

1. Rutgers’s move to Big Ten is a win-win everywhere but the field

-You may look at Rutgers’ record in football and other sports and ask yourself: ‘Why are they in the Big Ten?’ This is a great article about why they are by Marc Tracy of the New York Times. Key part of story: “[Rutgers] is better off in the Big Ten, where it receives about $10 million in conference revenue annually and in a few years will vest to a figure north of $40 million each year.” If the Scarlet Knights stayed in the AAC, its annual conference revenue would be somewhere around a few million a year. The move benefits the Big Ten, too. Read this story and never wonder why they are in this conference again.

-An excellent feature on Minnesota’s star players from Georgia by Andy Greder of the Pioneer Press. It looks at how Rodney Smith and Jonathan Celestin were recruited to Minnesota with great quotes by the coach that brought them here, Brian Anderson.

-If you think Minnesota has had quarterback problems, look at Rutgers. The Star-Ledger’s Steve Politi pens a column about the quarterback issues Rutgers has had recently and why there are no good options for who their current starter should be.

-A midseason review on Minnesota by ESPN’s Austin Ward. Short read that breaks down the good and the bad, and what to watch for in the next six games.

5. Rutgers addresses issue of ball security in preparation for Minnesota

-Rutgers has a lot of problems this year. The Daily Targum’s Brian Fonseca focuses on one: ball security. The Scarlet Knights had five turnovers against Illinois last Saturday, and four of them were fumbles. This article addresses how Rutgers is trying to solve the problem.

-Before Minnesota’s win at Maryland, going 8-4 was looking very unlikely. The Gophers grabbed the upset win at Maryland and now finishing the season 8-4 looks like a very attainable goal. They have almost three guaranteed wins the rest of the way (Rutgers, Illinois, Purdue) and then an unwinnable road matchup against No. 8 Nebraska, a tough home game against Northwestern and another hard-to-win road matchup against No. 10 Wisconsin. The Northwestern game looms large and could very well decide whether or not the team gets eight wins or not.

2. Minnesota’s defense is horrendous in the red zone… so far.

-There are 128 teams in the FBS. Minnesota is dead last among them in opponent’s red zone conversion percentage. The Gophers’ opponents have made 16 trips to the red zone and have scored on every one of them, making them the only team in the FBS that has allowed a 100 percent conversation percentage. The Gophers have the third-most turnovers in the Big Ten, so this problem is a bit puzzling. 16 attempts is probably to early to determine if it will be a season-long problem.

-Last year, Rodney Smith had the 14th-most rushing yards per game in the Big Ten. This year? He’s third in the conference with an average of 98.3 yards a game. He already has five more touchdowns then he had all of last year. The redshirt sophomore has broken off long runs, spun off defenders and created yards that most running backs couldn’t do. He may be Minnesota’s lone all-Big Ten player on offense.

-Five different Gophers football players were issued restraining orders and will not play against Rutgers. An article on how and why it happened and what the future looks like.

-Jonathan Celestin has been a force for the Gophers’ defense this year. An article analyzing how good he’s been.

-For the second-straight year, the Gophers are dealing with injuries on their offensive line. Claeys, offensive coordinator Jay Johnson, and the versatile Jared Weyler talk about how they’ve adjusted.

4. Questions from the Other Side: Rutgers football beat writer Brian Fonseca

-For this week’s Questions from the Other Side, the Minnesota Daily spoke with Brian Fonseca, the Rutgers football beat writer and sports editor for the Daily Targum. Fonseca shares his pick to win the National Championship and a score prediction for the game Saturday.

5. Gophers to continue with Rhoda as quarterback against Rutgers

-Claeys said Wednesday that it’s looking more likely Leidner could play Saturday. Rhoda may still be the guy the Gophers go with on Saturday for his second career start.

-Sidebar from the Minnesota game against Maryland on Rhoda’s first career start.

-Game recap from the Minnesota-Maryland game.