With Banham out, Kelley steps in to lead

Senior Shae Kelley has averaged 16.2 points and 9.0 rebounds per game. 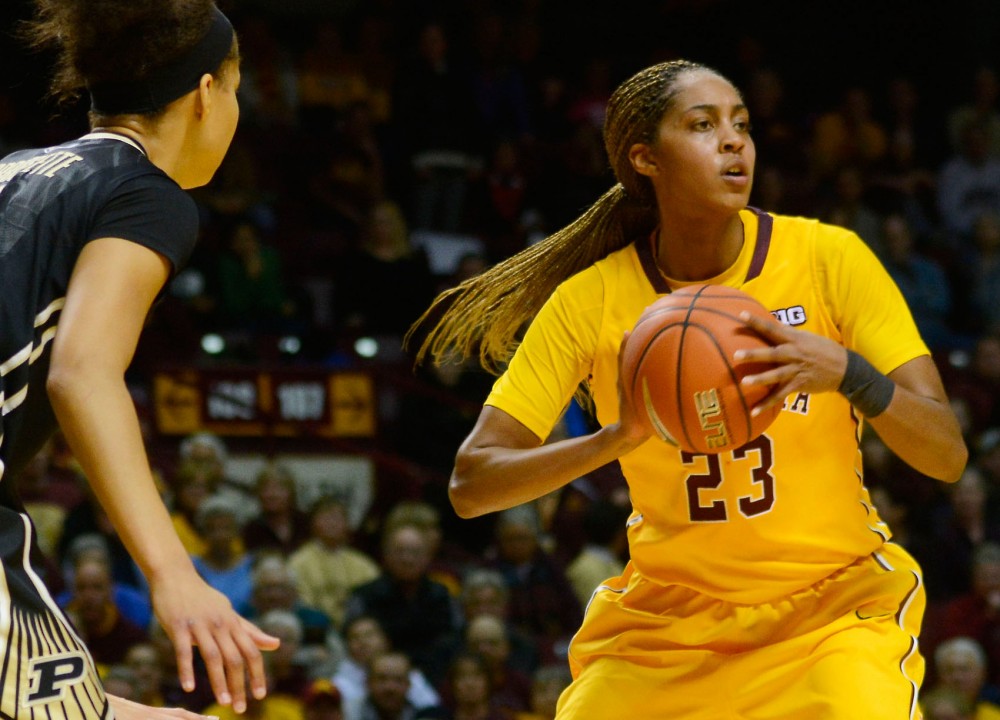 Head coach Marlene Stollings later announced Banham, the team’s star, would miss the remainder of the season because of a torn ACL.

With Banham down, both Kelley and redshirt sophomore center Amanda Zahui B. have been forced to step up.

Kelley said her immediate reaction to Banham’s injury was devastation.

“I’m also a senior and can only imagine what she’s going through. I can’t imagine myself being in that position,” she said.

“I knew the team would all have to step up as a unit, and I think we’ve been doing that very well,” Kelley said.

Zahui B. and Kelley have become the Gophers’ most dynamic and consistent players.

Both average more than 15 points and eight rebounds per game, but Zahui B. said Kelley provides more than just consistent stats.

“She’s been a leader since she stepped foot on campus. If she’s not on the floor, she’s talking. She’s a great leader, and it doesn’t always show by the numbers. [She’s also] someone we all can trust,” Zahui B. said.

Kelley isn’t known for her verbal leadership. Instead, she prefers to lead the team by setting a precedent.

“The team doesn’t need a lot of vocal leadership because of the experience. We have a lot of players beyond their years on this team, [so] it’s easy for me to go and lead by example,” Kelley said.

Stollings said one of the ways Kelley leads by example is spending extra minutes in the gym developing her craft after practice.

“Our system is very conducive to her style of play, and she’s been very committed to improving her skillset,” Stollings said.

Before coming to Minnesota, Kelley played at three different schools, including one junior college.

At Old Dominion last season, the forward led her team, averaging 17.8 points and 9.7 rebounds per  game.

Those numbers have remained relatively consistent as she’s moved over to the Big Ten.

Since her arrival, Kelley said the adjustment has been smooth because of the accepting nature of her new teammates.

“The transition has been pretty easy for me. It’s a transition from a team I led to a team that I’m a part of as a leader,” she said.

Kelley’s aggressive mindset on the court has given Minnesota a pure scorer who isn’t afraid to take the big shot.

Kelley said when Banham got hurt, she was ready to step up even more for the team.

“[I had to] be more aggressive. I might have to break some plays here and there, but the coaches give me the confidence to do that.”

As Kelley slowly closes in on the final game of her collegiate career, Stollings said she has shown more urgency.

“She knows in a couple months from now it’s over, and she has high expectations and goals for our team,” Stollings said. “Everything we do, it’s the last time she’s going to do it.”