Gophers keep Floyd of Rosedale after 22-21 win over Hawkeyes

Minnesota beat Iowa for the second year in a row. 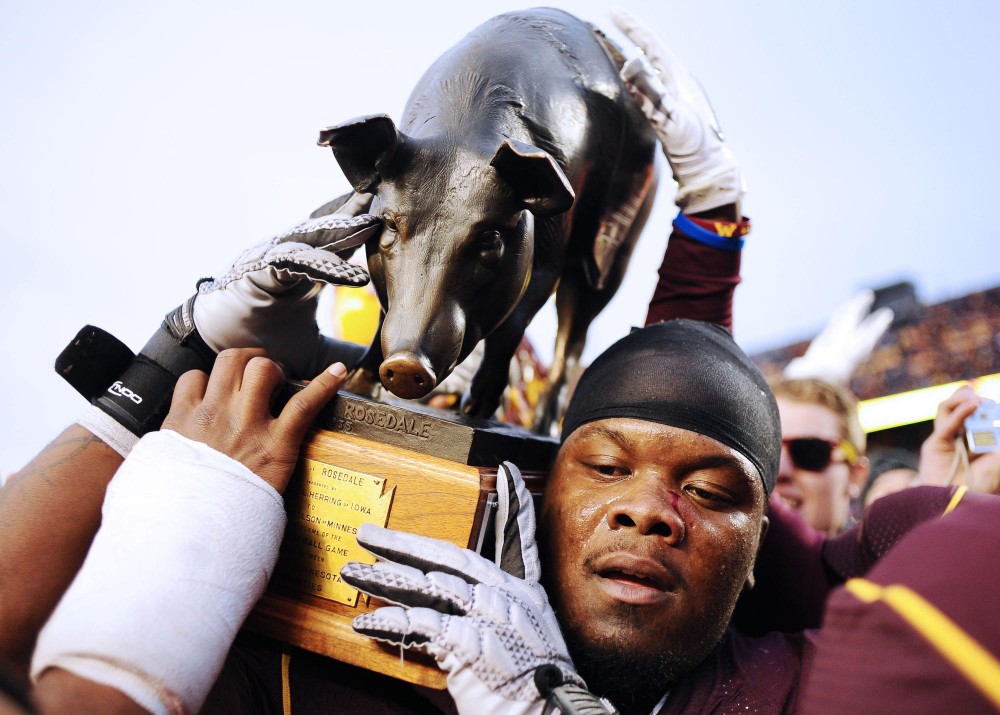 In a year filled with disappointment, turmoil and change, the Gophers finally found a degree of stability âÄî the Floyd of Rosedale trophy will stay in the Twin Cities for another year and the man who helped retain it will be here for another seven.

Minnesota beat Iowa at home for the second straight year Saturday, 22-21, to keep the bronze pig on campus.

A momentum-changing forced fumble and a gutsy onside kick helped spark a second-half Gophers comeback in a game that was eerily similar to the 2010 matchup.

âÄúI am happy for the state of Minnesota, the administration, the fans, but most importantly, I am happy for our kids,âÄù Minnesota head coach Jerry Kill said. âÄúIt is great to see them smile and have a good time. Floyd will be staying in Minnesota for a while.âÄù

Minnesota quarterback MarQueis Gray played his best game of the season. The junior completed 11 of 17 passes for 193 yards and a touchdown and ran for the game-winning touchdown late in the fourth quarter.

âÄúAs the quarterback, he has to be the leader, and he did a great job,âÄù Kill said. âÄúOur kids hung in there and that is a credit to him. It feels good to see him step up. He is learning.âÄù

Senior running back Duane Bennett had 20 carries for 101 yards and a touchdown, with 53 of those yards coming in the fourth quarter.

Iowa halfback Marcus Coker ran for 187 yards in the first half but Iowa had little to show for it, as the teams went into halftime with the score tied 7-7.

The Hawkeyes took a 14-7 lead early in the second half on a 1-yard Coker touchdown run. He finished with 32 carries for 252 yards and was spectacular all game long, often running through Minnesota tacklers to pick up extra yards.

Iowa regained possession and was poised to take a two-score lead when Gophers cornerback Kyle Henderson sacked Iowa quarterback James Vandenberg on what appeared to be an impromptu blitz.

âÄúI think that was just kind of a miracle play,âÄù Henderson said. âÄúIt really changed momentum of the game. To be honest, we really werenâÄôt supposed to do that but it just happened to work out that way. You canâÄôt ask for anything better.âÄù

Gray and freshman wide receiver Devin Crawford-Tufts hooked up on a 39-yard completion to set Minnesota up with 1st-and-10 from the 12, but the HawkeyesâÄô defense held and the Gophers kicked a field goal to trim IowaâÄôs lead to 14-10.

Iowa took the pigskin 71 yards on the following drive, which culminated in another 1-yard Coker touchdown run, but the Gophers countered with  a Bennett one-yard plunge to make it 21-16 with 8:22 to play.

Minnesota pulled out all the stops on the following kickoff. The Gophers surprised Iowa with an onside kick, which they successfully recovered.

âÄúWe practice it every week, but IâÄôll kick it on Friday, and if we donâÄôt execute on Friday IâÄôm not kicking it on Saturday,âÄù Kill said. âÄúI felt our defense had been out on the field way too much âÄî we needed to pick up an extra possession. It was great execution.âÄù

Iowa head coach Kirk Ferentz said he wasnâÄôt totally surprised by the call, but admitted that he wasnâÄôt adequately prepared for it either.âÄúâÄô

âÄúIt was a great call on their part and the execution was outstanding,âÄù Ferentz said.

Gray marched the Gophers down the field on a methodical 12-play, 59-yard drive, and tucked and ran on 4th-and-goal from the 3-yard line to give Minnesota a 22-21 lead, its first lead since Sept. 24.

Iowa turned the ball over on downs on its next possession, and the Gophers ran the clock out to secure their first back-to-back wins over the Hawkeyes since 1999-2000. Minnesota fans rushed the field after the game in celebration.

âÄúIt was great to see the fans and the students,âÄù Kill said. âÄúIf we can get this thing going like I believe we can, this is unlimited, unlimited potential of what we can be … We have passionate fans, we have passionate students. We just have to continue to get a product out there that wins.âÄù