For seniors, this weekend could be last stand at Mariucci 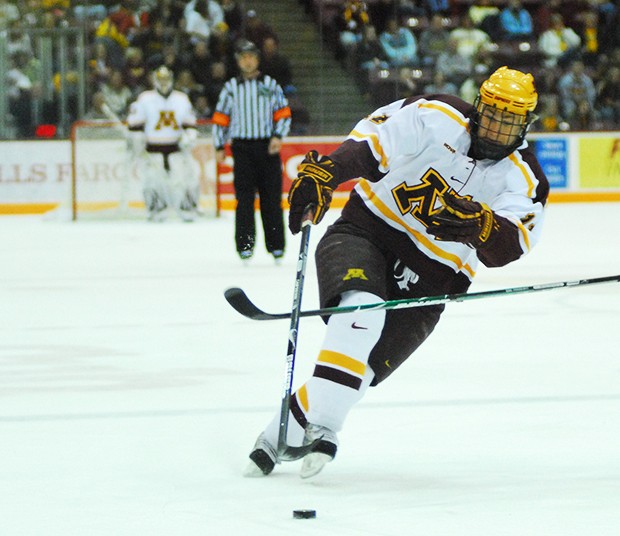 With the ways things are going for the Minnesota menâÄôs hockey team, this weekendâÄôs series with Minnesota-Duluth might be the last time the Gophers play at Mariucci Arena this year. For at least two members of the team, it might be the final home games of their collegiate careers. Like it or not, for seniors R.J. Anderson and Justin Bostrom âÄì teammates, classmates and roommates âÄì the days of wearing maroon and gold are numbered. âÄúI try not to look at it like that because, the way the seasonâÄôs been going, thereâÄôs still a lot to accomplish,âÄù Anderson said of his team that is 3-8-1 in its last 12 games. âÄúWith a couple wins this weekend, we can put ourselves right back into contention.âÄù At this point for Minnesota, contention means getting home ice in the playoffs. The Bulldogs (16-9-7 overall, 10-8-6 Western Collegiate Hockey Association) currently hold the fifth and final slot for home ice with their 26 conference points âÄì one point ahead of St. Cloud State and two up on Minnesota (13-11-6, 10-10-4). Meaning the pressure is on for the Gophers especially Anderson and Bostrom. âÄúHopefully, [the sense of urgency] is at an all-time high this weekend,âÄù Bostrom said. âÄúHopefully we can be at our best. Head of the class Neither Bostrom nor Anderson are the most high-profile players, but coach Don Lucia had nothing but praise for his seniors on Wednesday as he has for nearly the entire year. âÄúThey represent the program in every way that we want the program represented,âÄù Lucia said. âÄúBoth of those guys are very selfless. They put the team first in every aspect of their whole career.âÄù TheyâÄôre also all thatâÄôs left of what was once a powerful class of six recruits that has slowly shrunk to two program players. âÄúTheyâÄôre both whatâÄôs left of that class,âÄù Lucia said. âÄúSome kids have elected to leave early and are actually playing in the NHL right now, which is great for them.âÄù Phil Kessel left after his freshman season with the Gophers for the Boston Bruins, where Blake Wheeler joined him after last year. Jeff Frazee hasnâÄôt made it to the NHL yet, but he has played well enough to make the AHL All-Star roster this season. Current Gophers forward Ryan Stoa came to campus with that group too, although heâÄôs classified as a junior for eligibility after last yearâÄôs knee injury. Originally, the Minnesota captain was going to share the spotlight with Bostrom and Anderson on Saturday night when the team honors the class. He has since decided against it. A spokesman for the team said he initially wanted to take part in the celebration since they are the class he relates with. And lives with for that matter. Taking part in the ceremony would also give fans the impression that this year is StoaâÄôs swan song âÄì something Stoa and the team have kept relatively quiet about all season.