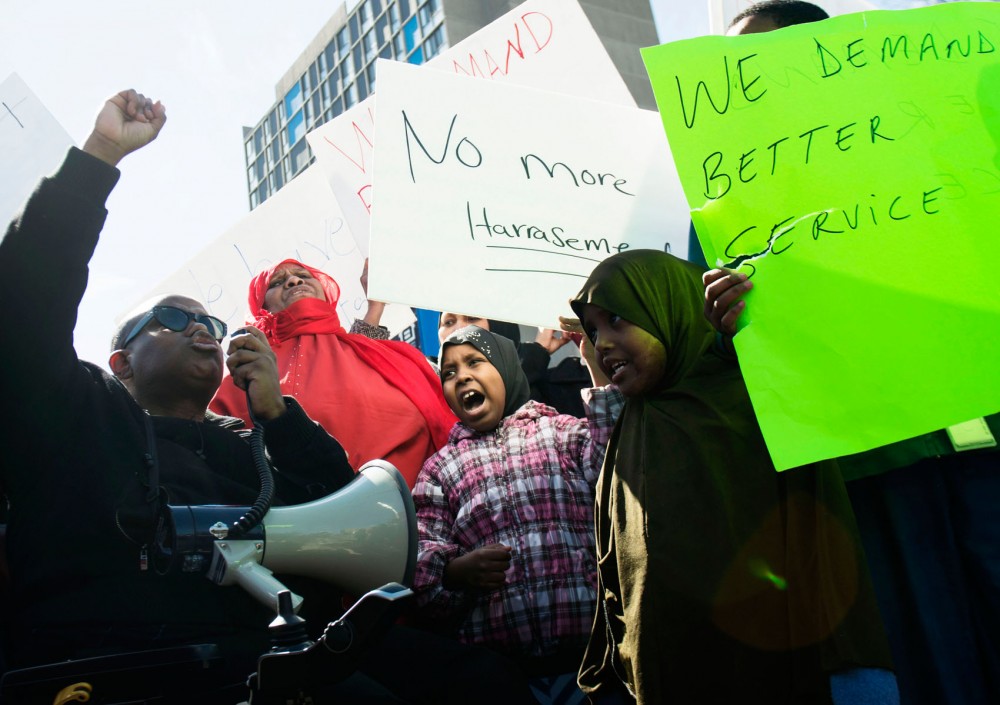 Residents and community members assembled outside the Riverside Plaza on Friday afternoon holding signs touting messages like “We need change now” and “Stop mistreating us.”

Nearly 100 people gathered for the second demonstration this month to protest against the plaza’s management. Residents echoed concerns they’ve had over the past two years, including a lack of transparency from the tenant association, mistreatment by the apartment’s staff and insufficient facilities.

“They see us as voiceless, and we need something to change,” said Faysal Hassan, a resident of the plaza since 2006.

Riverside Plaza, an apartment complex just off the West Bank, is home to more than 4,000 residents and has the highest concentration of immigrants in the city.

Some residents questioned the role of the Riverside Plaza Tenants’ Association, which is designed to act as a bridge between residents and management.

Mubashir Jeilani has served as the association’s vice president for about two years and said he plans to step down.

Though the board is supposed to meet once a month, he said, he’s been included in fewer than 10 meetings. Jeilani speculated that the other meetings have been private between the association’s president and Sherman Associates, which manages the plaza.

When board members did meet, Jelani said, they didn’t work to find solutions for tenants’ complaints.

“This problem isn’t what the board has done; it’s what it hasn’t done,” he said. “We shouldn’t have to have the residents come onto the street to protest and demand things that we as a board should already be doing.”

Hussein Ahmed previously held the executive director position of the West Bank Community Coalition, which represents the Cedar-Riverside neighborhood, where the apartment is housed.

When he sat on the coalition, Ahmed said he tried to meet with the tenant association multiple times to share concerns brought to him but would show up to the meetings to find a note saying the meeting was canceled.

“It was all very hush-hush and secretive,” he said.

The concerns brought to Hussein Ahmed months ago are the same issues Jeilani said he still hears.

Elevators are consistently broken down, Jeilani said. When kids come home from school, he said the wait times can be as long as 30 minutes.

Plaza resident Fahan Salaad said through a translator that broken elevators have been a serious issue for her because she recently underwent knee surgery.

An elevator consultant will inspect all elevators in the next week, according to an email from Director of Marketing and Communications for Sherman Associates Valerie Doleman.

Doleman said management met with the tenant association and a representative from the Confederation of Somali Community in Minnesota last week to discuss solutions to residents’ concerns.

She said Sherman Associates drafted an agreement that outlined plans to address complaints and requires management to take sensitivity training next month.

Not all parties present were willing to sign the agreement, though, Doleman said, but management will continue working with the tenant association to discuss concerns.

Ward 6 City Councilman Abdi Warsame was at the protest and said a public listening session will be held April 3 at the Brian Coyle Center. Representatives from the city’s Department of Regulatory Services will be present to hear resident’s complaints, he said.

“We want to understand and help the tenants and management understand each other,” Warsame said. “We need to be able to have open [dialogue].”