The Gophers will also need to contain running back Ameer Abdullah. 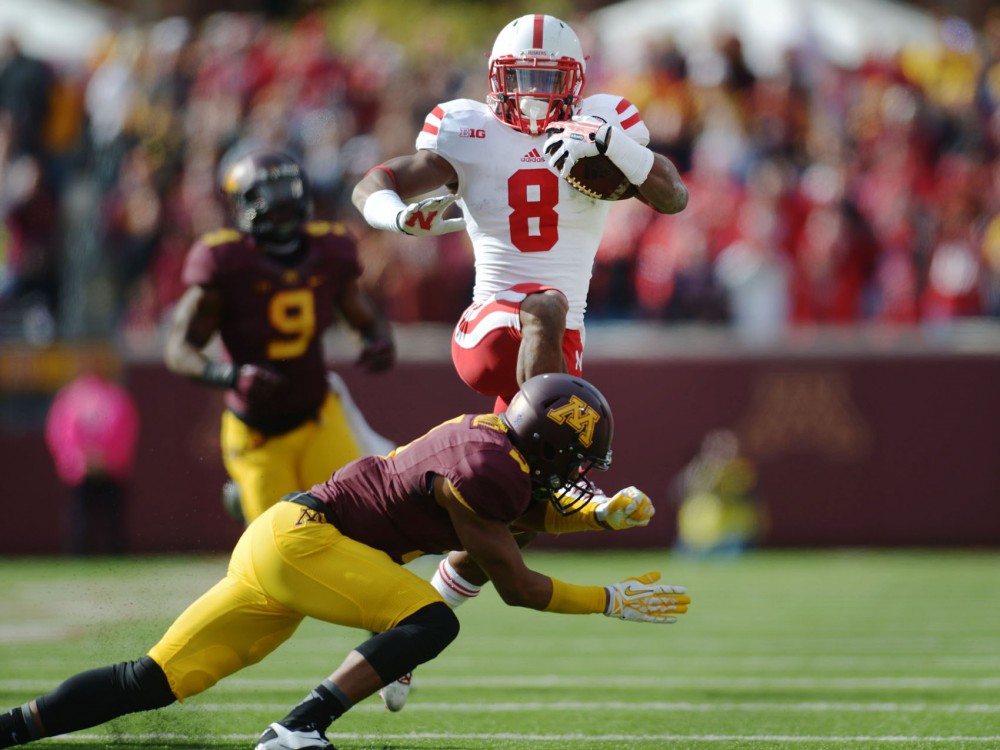 Nebraska running back Ameer Abdullah rushes for 165 yards on Saturday, Oct 26 against the Gophers at TCF Bank Stadium.

In both of Minnesota’s Big Ten losses and in its closest win — a 39-38 shootout against Purdue — the Gophers’ defense came out slow and struggled to contain speedy playmakers.

It started last month against the Boilermakers when wide receiver Danny Anthrop turned a simple screen pass into a 55-yard touchdown reception. Later in the first half, running back Raheem Mostert went 42 yards for a touchdown before Purdue headed to the locker room with a 31-20 halftime lead.

The next week, the Gophers lost in Champaign, Ill., after falling behind 14-0 in the first quarter.

Last Saturday against Ohio State, quarterback J.T. Barrett broke off an 86-yard run and then hit Jalin Marshall for a 57-yard touchdown pass that put Minnesota down 14-0 again at the end of the first quarter.

“If you look back, when our defense has had slow starts — Purdue, Illinois … the common thread is missed tackles,” Botticelli said.

With those slow starts behind them, the Gophers’ defense is looking to start strong this Saturday when it faces Nebraska.

That will be no easy task, considering the Cornhuskers feature Ameer Abdullah, one of the nation’s best running backs, along with a balanced passing attack.

Abdullah was one of the leading candidates for the Heisman Trophy before injuring his left knee in a game against Purdue earlier this month. His level of play dipped, as he put up just 70 rushing yards in his last two games. But Nebraska head coach Bo Pelini told reporters Monday that Abdullah’s knee is now “fine.”

If that’s the case, Tracy Claeys’ defense had better be ready.

“He’s about as fast a back as we’ll play against,” said Claeys, Minnesota’s defensive coordinator.

Abdullah wasn’t always a running back. At Big Ten Media Days in July, the Alabama native said he grew up playing wide receiver before his high school head coach switched him to tailback.

“He came in, returned a kick, got a couple fly sweeps, changed the momentum of the game,” Abdullah said. “That’s just how I want to go about this year — being electrifying, being that guy that could change the momentum.”

Abdullah made a similar impact early this season, but it remains to be seen if he’s back to being himself.

Regardless, the Gophers aren’t taking him lightly.

“He’s pretty agile. He’s got tremendous speed, he’s shifty, can make you miss,” Botticelli said. “That’s one thing we’ve got to take away from him.”

If Minnesota is able to contain Abdullah, it likely won’t fall behind early again. That would go a long way toward defeating the Cornhuskers for the second consecutive season.

“You take one or two bad steps, and it’s not good,” head coach Jerry Kill said. “Once he breaks out of there, you kind of hold your breath a little bit.”