The University’s undergrad literary magazine, The Ivory Tower, is back for another round. 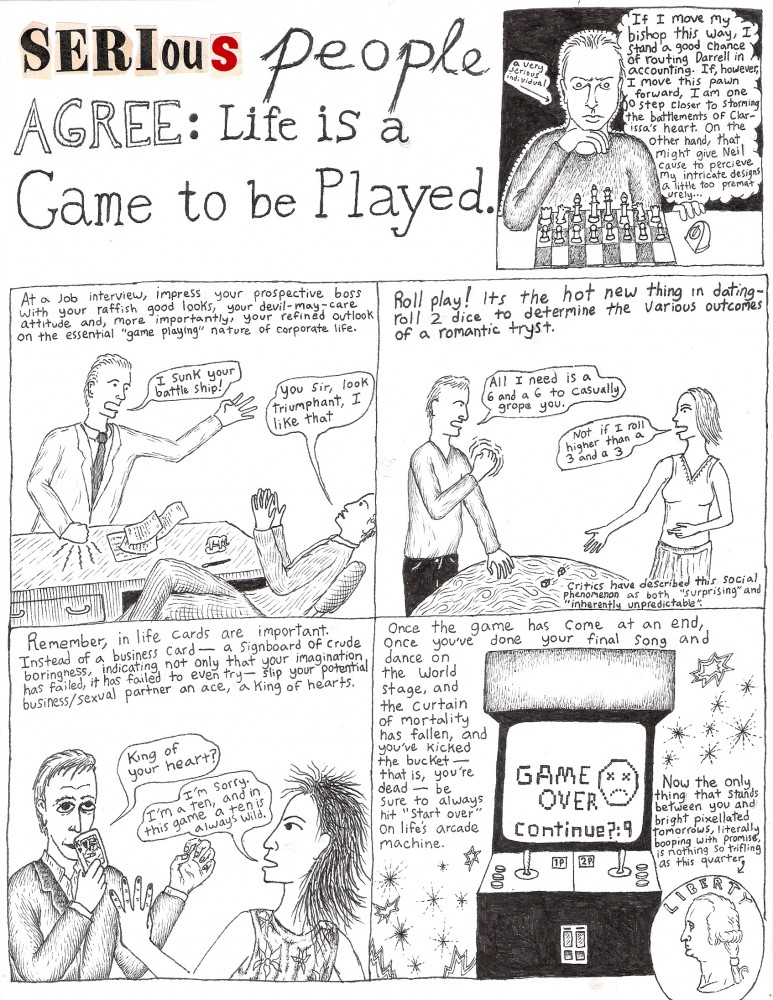 Max Mose's "Life is a Game" makes up the back cover. PHOTO COURTESY THE IVORY TOWER.

Ivory Tower Launch Party WHERE: Mississippi Room, Coffman Memorial Union WHEN: Sat., May 9 WHO: Lucy Michelle PRICE: Free LetâÄôs face it âÄî literary magazines get a bad rap. But when thinking about The Ivory Tower, donâÄôt picture a bunch of low-budget writers with a tiny group of pretentious readership. This yearâÄôs Ivory Tower is a whole new breed of literary magazine. In place of a dutiful selection of one story after another is a hyper-visual multimedia collection that is expertly arranged. Each page touts enthralling graphic design and lit selections. The final product is an artistic extravaganza, with a story on the Teenage Mutant Ninja Turtles and still life photographs of plastic Target bags. Around stories like âÄúLt. Miner Drinks Some Coffee,âÄù a journey through the breakdown of a long-standing marriage and the discontent of a returning veteran, the pages are lined with smatterings of green letters that highlight the fluidity of language and sensory overload that assaults our consciousness day after day. The back cover of The Ivory Tower is a comic called âÄúSerious People Agree: Life is a Game to be Played,âÄù a satirical journey through the lives of solemn existentialists, with ways to amp up life by choosing moves carefully and plugging more quarters into the machine constantly. The literary magazine is part of a yearlong class at the University of Minnesota where students sign up and are then elected to positions. One of this yearâÄôs co-editors-in-chief, Meghan Hanson , an art, English and art history senior, said, âÄúThe goal of the project was to take 20 visions and turn them into one magazine.âÄù Co-Editor-in-Chief and art senior Dixon Bordiano said the crew uses âÄúthe golden age of magazines as an inspiration, with both images and words used to create a spread.âÄù The team worked from back issues of the Ivory Tower, which started in the early 1950s as a bimonthly insert in The Minnesota Daily. âÄúWe collected lots of literary magazines and tried to amp up the design,âÄù Hanson said. Hanson and Bordiano aimed to make the issue âÄúa platform for the [student] writers to build the community.âÄù They took into account the type of reading that students do and focused on integrating serious, metaphorical literature and light-hearted prose to encompass the attitude of campus. The Ivory Tower is not just what lies in between the covers, though. This year, the team worked on amalgamating visual arts with video and music, all of which are available on the Ivory Tower website. There you can listen to spoken-word poetry, such as âÄúA Quiet Dinner with a FriendâÄù by Rhael Laramy , a rolling stream-of-consciousness following the destruction of a friendship over scrambled eggs. The site also features Roster McCabeâÄôs new jazzy-rock single âÄúDrift,âÄù with rolling saxophones complimenting the breathy vocals of lead singer Alex Steele. The issue also has poetry by Lewis Hyde, a former University student named one of the most influential writers of his generation, which has been reprinted from a 1967 publication of the Ivory Tower. His poem âÄúMy Friend Cries SometimesâÄù is an angst-ridden exploration of a female friend, her tired yearnings and turbulent exhaustion. The distribution of copies began on campus this week, and the Ivory Tower team will be setting copies on newsstands and, as Hanson says, âÄúhanding them out on campus guerilla-style.âÄù The official release party will feature the musical stylings of Lucy Michelle (a la Lucy Michelle and the Velvet Lapelles). With the yearâÄôs work winding to a close, Dominican writer Junot DÃ­az offers some advice in the final pages of the magazine: âÄúEach of us lucky enough to be in the University stands in for 1,000 people better than us. So what do we do for our privilege? We do WORK.âÄù