The school hopes to build the center in Crosslake by 2021. 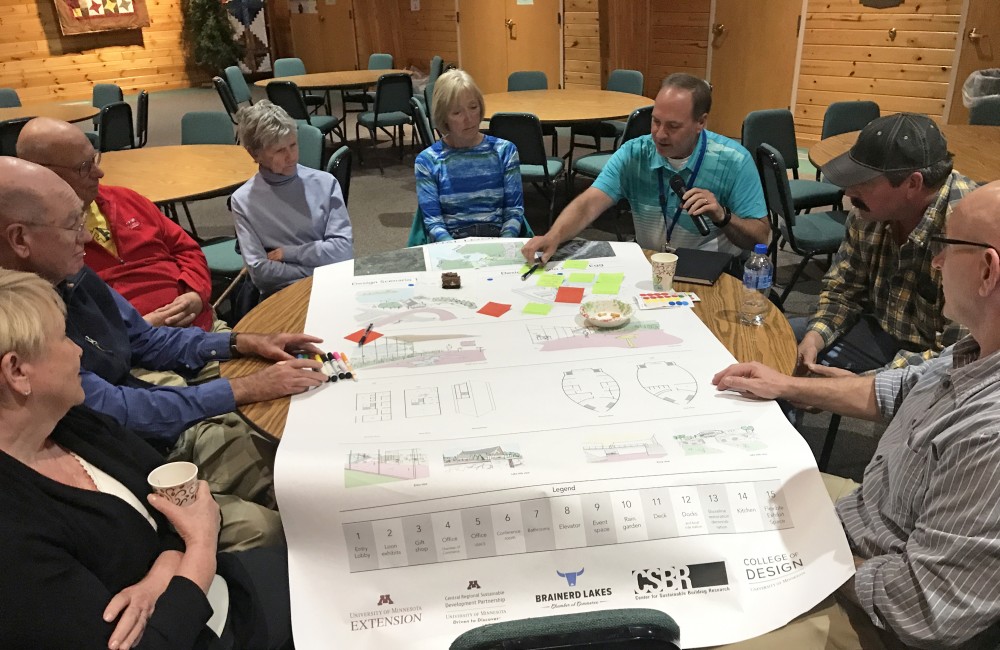 Members of the Crosslake community and the National Loon Foundation look at plans of the proposed National Loon Center at a community meeting led by the University's Center for Sustainable Building Research.

The University of Minnesota and the National Loon Center Foundation are working to build a center for loon education and conservation near Brainerd.

The first-ever National Loon Center is expected to be built by 2021, and members of the University’s Department of Applied Economics are conducting a feasibility study to confirm the center’s location in Crosslake. Experts say the center will help protect the area’s natural resources and loon population, as well as provide education for the community and tourists to learn what they can do to help Minnesota’s loons.

“People love to look at the loons on the lake and listen to their calls, and [the loons] have a real connection with people, and yet there is a lot that’s unknown about the loon’s life cycle and their habitat requirements,” said Bill Gartner, a University economics professor who is working on the feasibility study. Loons’ habitats are threatened by a number of factors, including damage from the large BP oil spill in the Gulf of Mexico 2010. Many Minnesota loons that travel to warmer areas in the winter were significantly impacted by the oil spill, Gartner said.

The College of Design’s Center for Sustainable Building Research held community meetings and public engagement conferences throughout February to determine whether members of the community would be supportive of the center.

Researchers thought Minnesota was an obvious choice for a national loon center. They think Crosslake will be a good fit because it is a natural habitat for loons and would benefit from additional loon protections and conservation.

“Minnesota has the largest population of loons, and there are over 200 loons that visit the Crosslake area in a year,” Singh said.

Plus, the city is a popular tourist destination.

“Crosslake is in the midst of a major tourism center for the state and there are so many people with seasonal homes, visitors and resorts,” Gartner said.

Three components make up the feasibility study, which is expected to end in May or June, said Elliot Charette, an economics graduate student who is working on the study.

A demographic analysis will study the type of people that usually come to the Crosslake area, as well as the reasons they visit. A demand evaluation will estimate the number of people that might visit a center, and an operating revenue analysis will assess the cost of running and building the center, Charette said.

In addition to loon conservation, the center is expected to bring jobs to the Crosslake area, he said.

“This is a sustainable and environmental way to create economic development and to have [environmental stewardship] jobs,” Charette said.

If experts decide that Crosslake is a suitable location for the center, they’ll move on to the next phase of the project: planning and construction. However, there are still negotiations to be made over the land and where the center would be built, as the U.S. Army Corps of Engineers owns the land. But the collaborators are optimistic about the project’s outcome.