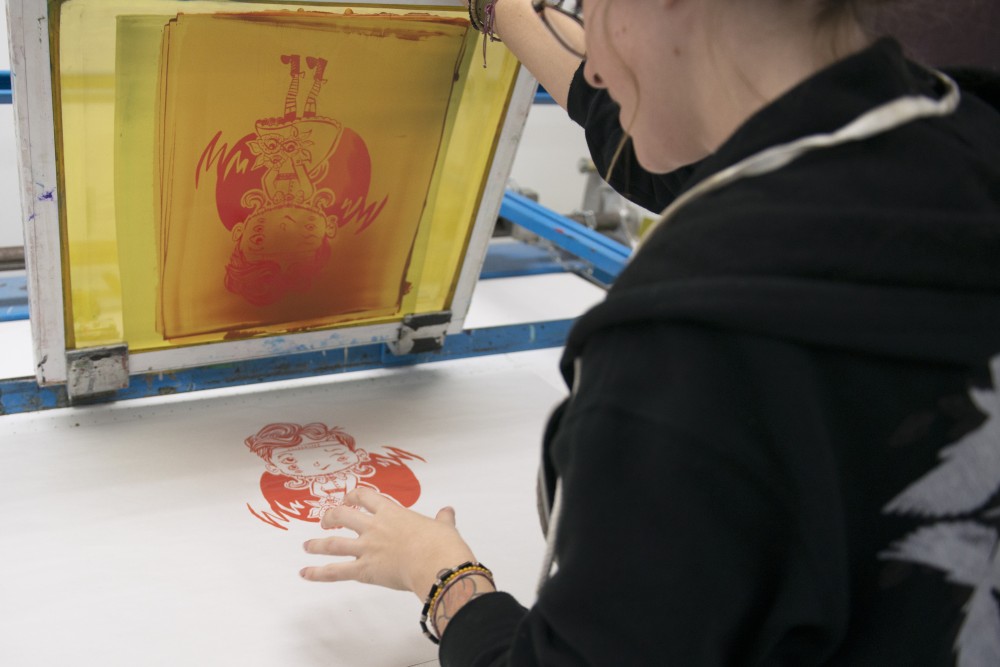 In some ways, Bohemian Press is like many University of Minnesota student groups — they have meetings, typically with free doughnuts, and appear at pop-up events across campus.

“I took a printmaking class my sophomore year and fell in love with the community,” said Bohemian Press co-president Olivia Novotny, a journalism and art senior. “It’s a really strong department within the art department. The professors are so talented and kind and I was really encouraged to do art.” Alongside their more traditional art sales, Bohemian Press has a history of political activism on campus and around the Twin Cities, especially during anti-Trump protests earlier in the year.

“We printed a bunch of signs and gave them away at student protests so people could have these screen-printed signs,” Novotny said. “[They] looked cooler and were maybe more attention-grabbing than something scribbled on a board. … It looks like art, and it makes a statement.”

This activism is not necessarily unique for the printmaking form.

“Part of the history of printmaking is that in various times throughout history, being able to mass-produce powerful ideas and language … was very important,” said Bohemian Press secretary Maureen Amundson, a senior studying English and art. “You can get multiples of prints you’re creating out there. It’s always been … good for political messages.”

Members of Bohemian Press are able to sell their own work in the collective’s sales while also networking with other artists. With the funds the collective has, student members are also able to work with skilled printmakers to learn nuanced techniques and network with professionals.

While Bohemian Press does host traditional art sales for its members, its live events work better to demonstrate the art form.

“I think people get really interested when they see screen-printing happening. … Most people are like ‘what? I didn’t know that. I’m just sitting here, wearing my graphic tee, not thinking about how this was produced,’” Novotny said.

Occasions like the second-ever Arts Quarter Festival on Oct. 11 are the ideal platform for such demonstrations.

Various student groups and performances will spread across the festival, allowing for an immersive artistic experience.

“I’m looking forward to seeing how it all works together, with various music being performed and then just on the other side of the building, a puppet show also taking place,” Mehl said.

The Bohemian Press is planning on using the Arts Quarter Festival as another opportunity for political engagement. The group hopes that the resistance designs will be implemented in political statements.

“We’re printing resistance flags. … Anyone, not even just members of our club, can submit whatever they see fit for that prompt, and we’ll screen-print them,” Novotny said. “It encourages discussion about resistance and challenging powers, as opposed to being content or passive in the community.”