Decades after “Twin Peaks” premiered, we still ache to wrap ourselves in its world. The Black Lodge Gifts in south Minneapolis helps us do just that. 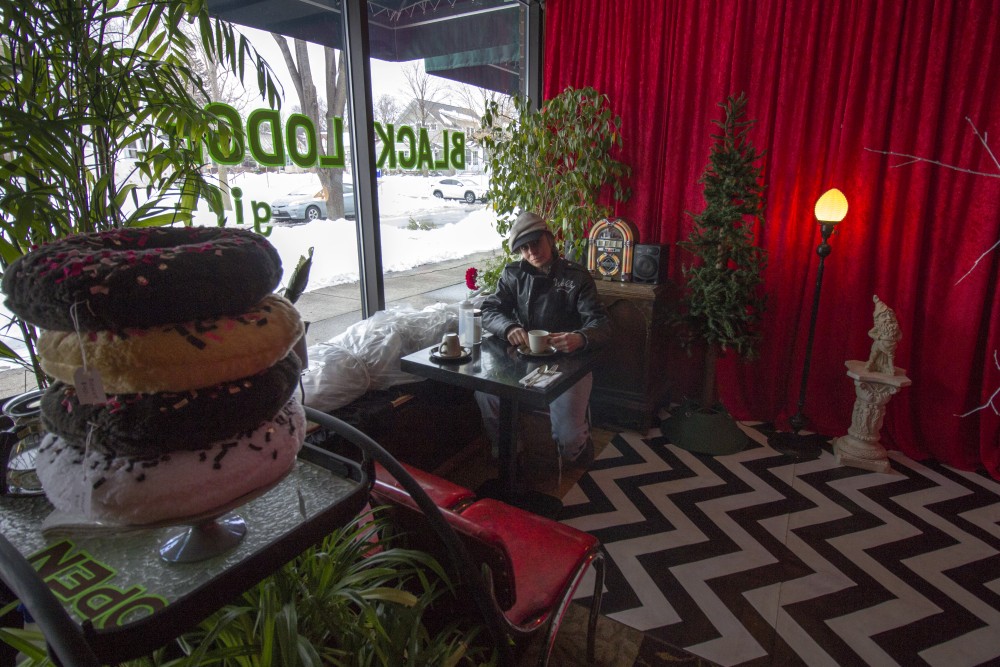 Local artist Nancy Waller started watching “Twin Peaks” when it came out in 1990. In early December, she unveiled a pop-up inspired by the show in her south Minneapolis storefront — the “Black Lodge Gifts.”

Startling window shoppers with a blue-lipped and gold-eyed Laura Palmer mannequin in the window, “Black Lodge Gifts” features a number of Lynchian favorites. The floors are a hand-painted black and white chevron, the walls are covered in red fabric and the “Fire Walk With Me” soundtrack is on repeat.

Waller mans the store in costume (she’s done 11 characters so far). Besides posing for photo-ops and reciting scenes from a hand-copied script, she sells homemade plush logs, donuts (with sequin sprinkles) and cherry pie slices to visitors. They fly off the shelf. Anything Lynchian is bound to spark questions, but the success of this pop-up carries a big one.

Why, decades after its inspiration originally premiered and months after the reboot, is this little shop bustling?

It may have something to do with the shop offering a “real-world experience.” It’s something live tweets and fan message boards can’t afford us. Add to that the connection people feel to the show — a deep rooted affinity for all those weirdo Pacific Northwest residents — and you have yourself a hit.

Alex Arnold, a recent University of Minnesota graduate, started watching the show during the winter of his senior year in 2016.

“It was so good. The tone, story, imagery. It’s hard to overstate how good I thought it was,” Arnold said. No matter how much he’s binged since then, Arnold is still eager to talk about the show — just like the other people who visit Waller’s Lodge every day.

Last Friday, patrons included college students who first learned of the show as tweens reading Tavi Gevinson editorials, babies whose parents were searching for a good photo-op and Gary, a new grandfather and longtime fan who just happened to hear about the store during a quick visit to Minneapolis.

Working the one-person operation day after day, Waller isn’t sure how long she’ll keep the pop-up open. As she says, constant cosplaying might be bad for your health.

But it’s here for now. And it proves that David Lynch — though he is the inspiration for this one — isn’t the only person who can design a universe.

“When I was a kid, I would’ve done this if I could,” Waller said. “But I didn’t have the skill set.”

The shop does feel like a child’s game of pretend come true, a glass box in Manhattan or a less consumer-based Wizarding World of Harry Potter.

But it’s better. It’s hard to explain, but there’s more dreaminess to it.

“We make our world happen,” Waller said. “I wanted this in mine.”