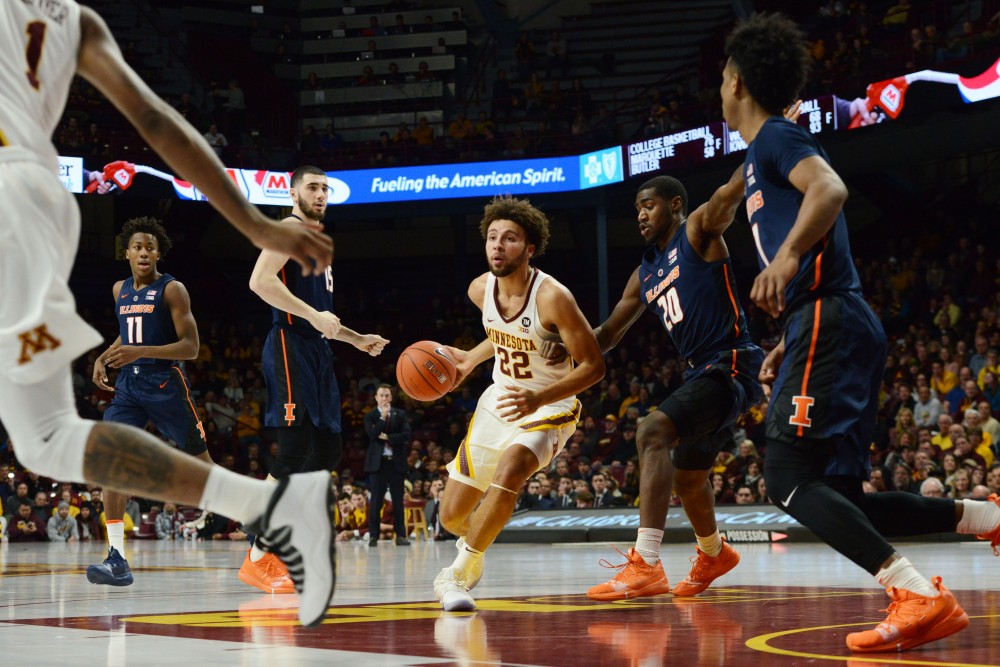 Freshman Gabe Kalscheur dribbles to the lane at Williams Arena on Wednesday, Jan. 30.

For the second time in three seasons, Minnesota qualified for the NCAA Tournament, but unlike in 2017, this time the Gophers were able to win a game.

Playing against the team for which his father was head coach for 16 seasons, Gophers head coach Richard Pitino, a former assistant at Louisville, said the victory was all about his current players.

“It’s very, very hard to get to the tournament, especially in our league,” Pitino said. “We had five new players, we had some ups and downs.  It didn’t matter who we played.”

Early on, he teams traded buckets, going back-and-forth with eight lead changes in the first 10 minutes. With 7:14 until halftime, a 3-pointer from senior Dupree McBrayer put Minnesota in front 18-17, a lead which held until the end of the game.

The Gophers benefited from timely 3-point shooting throughout the afternoon.  Before halftime, junior Amir Coffey tied his season-high, making three shots from behind the arc.  In addition to those and the 3-pointer from McBrayer, freshman Gabe Kalscheur hit a pair and Minnesota went 6-15 overall from deep in the first half.

Coffey displayed his offensive efficiency early, going 5-8 on field goal attempts in the first half without a turnover.  He finished with 18 points, 13 of which came before intermission.

“Amir’s been pretty locked in over the last month,” Pitino said.  “When he’s good and understanding where his shots are coming from, he’s terrific. He was locked in early and you could tell.”

While Coffey’s scoring output was no surprise, after halftime Minnesota got offense from a more unexpected source.  Kalscheur made five 3-pointers and finished with 24 points, one short of his career-high.  He led the charge in terms of outside shooting.  The 11 3-pointers the Gophers made were just one less than their season-high.  After the game, Kalschuer said the team’s mentality accounted for the improved shooting.

“It’s just confidence,”  Kalscheur said. “Just forgetting about that one that you missed and moving on.  Confidence is a big key.”

Begging at the 12:22 mark of the second half, Kalscheur scored all of Minnesota’s points on a 9-0 run that extended the Gophers’ lead to 62-43.  Louisville fought back to make the score 73-64 with five minutes remaining, but could never get within two scores of Minnesota.

Senior Jordan Murphy fought through a back stiffness to score 18 points in his first-career tournament win.  Also scoring in double-figures was McBrayer and freshman Daniel Oturu, who both finished with 13 points.

The victory was the program’s first in the NCAA tournament since 2013.  According to Murphy, advancing to the round of 32 in his final season wasn’t only special for him, but for the whole team and the fans as well.

“It means a lot to us and it means a lot to our state and our fans and our program as well,”  Murphy said.  “We were in this position two years ago and lost.  Now being able to redeem that loss and win and keep moving and advancing and going into the next game with a good mindset that’s a very positive thing.”

Minnesota will play again on Saturday against either Michigan State or Bradley. If they earn a victory in that game, they will be two wins away from playing in the Final Four at U.S. Bank Stadium.