The Soap Factory is turning its basement into a den of terror for the seventh year. 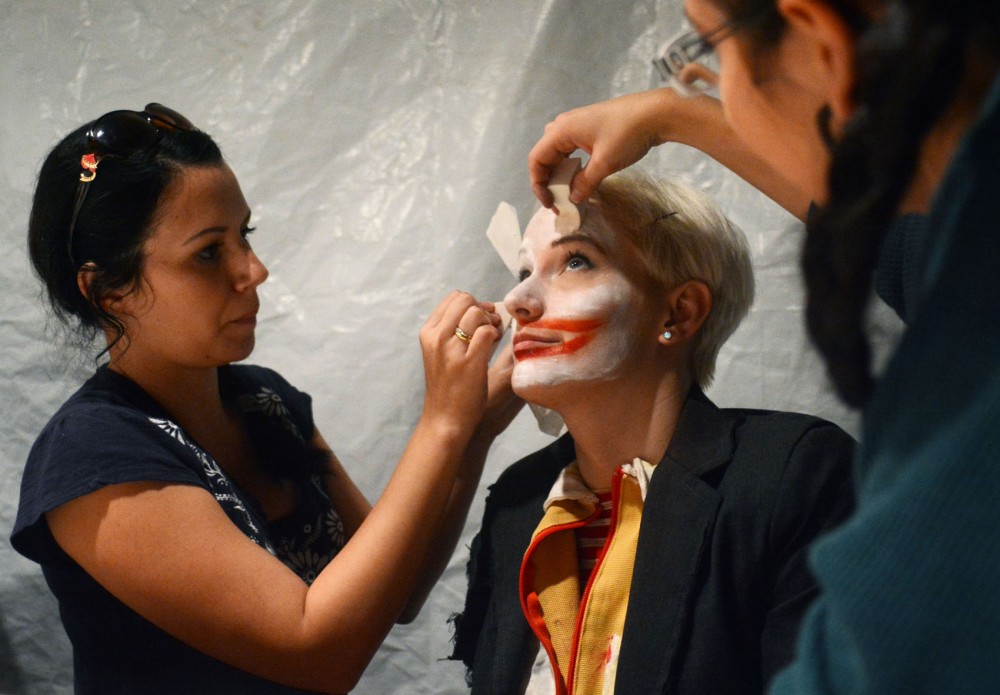 The Soap Factory’s staff and volunteers swear the basement is haunted. Over the years, they’ve brought in local paranormal investigators who have confirmed their suspicions using readings and recordings.

“Whether or not you believe it, we have so many stories to support it,” company and stage manager Birdie Freitag said.

The Soap Factory’s Haunted Basement is now in its seventh year, and this time around it’s trying a new approach.

In the past, local artists would submit ideas for rooms, which would then be
Frankensteined together and eventually a theme would come through. This year, they started with the theme and added artists after open brainstorming sessions.

“We held a series of workshop playtimes where basically we turned the lights off and scared the living daylights out of each other and then talked about what happened,” Freitag said.

Some ideas come straight from the artists’ nightmares, and others from universal psychological terrors like claustrophobia.

This year it’s going to get messy, so do yourself a favor and keep your classy clothes at home.

When artists took over the National Purity soap and chemical company’s building in 1995, they knew they weren’t dealing with an ordinary space.

The basement lacked plumbing, heat and electricity, and it was full of abandoned factory equipment, bits of machinery and piles of coal. And it gets worse.

For Chris Pennington, it was the perfect canvas.

In the mid-2000s, Pennington, then a Soap Factory volunteer, asked if he could construct a haunted house in the space.

“Before that, we had never thought about bringing patrons down into the basement,” Egner said.

Pennington and a crew of volunteers devised the first Haunted Basement in 2007. He worked with the space instead of around it, incorporating the leftover machinery and creepy nooks and crannies.

Advertising for the first Haunted Basement was through leaflets and word of mouth — it worked.

“The first weekend, we had people lining up around the block. They would stand in line for hours, and we were completely blown away,” Egner said.

To enhance patrons’ experiences, the Haunted Basement strives to activate all five senses with disturbing textures, sounds, sights, and smells — and the smells generally touch the taste buds.

Mike McGinley and his St. Croix Sensory co-workers began developing scents for the basement in 2008. Though they specialize in odor testing, the St. Croix Sensory staff had always been interested in working with theatrical and artistic productions. They were definitely qualified.

“We’ve always had a long history and background of being around bad smells,” McGinley said. “And when you do that, as chemists would too, you start to know what families of chemicals smell like what.”

Over the years, the St. Croix Sensory has concocted an array of odors for the basement, including urine, B.O., decaying flesh and feces. In some rooms, they’ll introduce pleasurable smells like lavender to disorient patrons.

“We can take something that’s going to remind people of something soothing in an environment where the visual sense is watching something disturbing,” director Noah Bremer said.

“Part of the vision is that this is an artistic experience,” Bremer said. “We’re not corporate scare masters.”

The psychology of scary

As the weeks and years pass, the Haunted Basement’s actors learn a lot about human responses to fear.

“People show fear in so many ways,” art director Francisco Benavides said. “You have to learn to adjust to all these different kinds of people and what gets them going.”

Benavides said an especially terrified woman once punched him in the ribs.

“Most people who have been here for a while have been hit,” Francisco said. “I thought it was great. I kinda got a kick out of it.”

For those who can’t handle the horror, there is a way out.

“There’s always a safe word,” Egner said. “We treat ‘uncle’ as the word of God.”

Two years ago, artists built coffins toward the end of the Haunted Basement and led patrons inside them before closing the lids. Though the coffins weren’t locked and few audience members physically resisted, more than 200 people yelled “uncle” that year.

“It was so rare that people would push back,” Egner said.

Psychologically speaking, Bremer said he’s fascinated with how actors transform when they go into character.

“Seemingly normal people come to work on this project and, when given the opportunity and permission to be maniacs, they accept it. There’s a wonderful catharsis that comes by being crazy for a few hours every night,” he said.