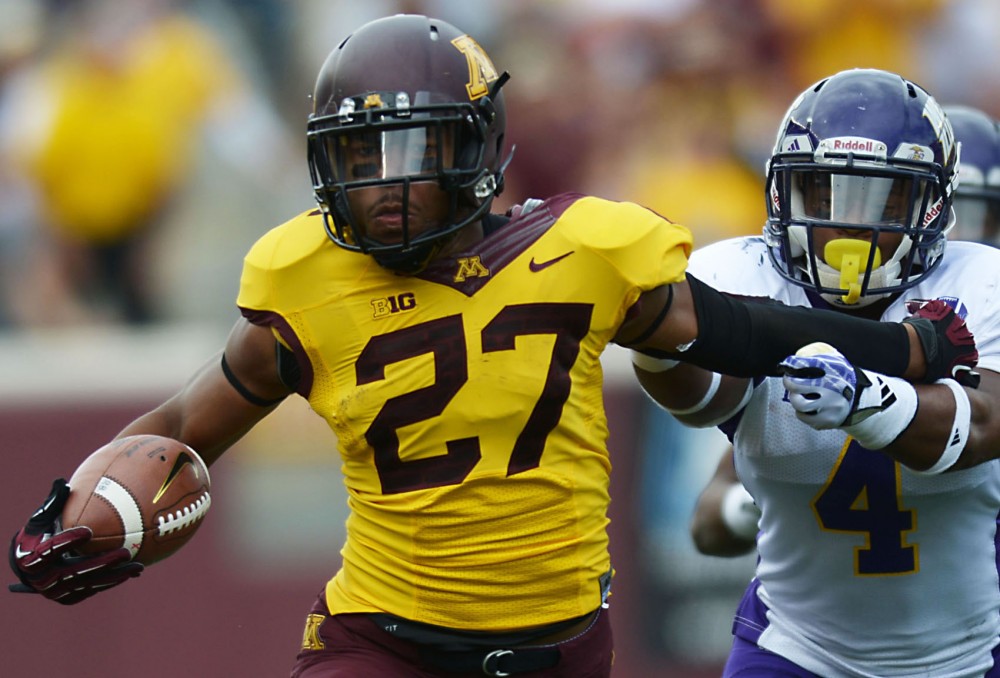 But when he got an opportunity in the first game of the season, he seized it.

Starting running back Donnell Kirkwood sprained his ankle against Nevada-Las Vegas, and Cobb came into the game and rattled off a 60-yard run.

After leapfrogging Kirkwood and Rodrick Williams at the position, Cobb kicks off this season as Minnesota’s go-to guy in the backfield.

Cobb played in three games as a freshman and five as a sophomore.

As a junior last year, Cobb played in all 13 of Minnesota’s games, tying for the team’s lead with seven touchdowns.

“David was prepared for his opportunity and took it and ran with it and just had a great year,” head coach Jerry Kill said at Big Ten Media Days.

Cobb rushed for 1,202 rushing yards last year, which ranked him at 27th  in the nation.

This season, he should see more playing time and even higher marks.

“[With] his hard work and preparation for this coming year, I know he’ll do well, and he’s excited about that,” Kill said. “He’s got a lot of high goals like every player that’s here in the Big Ten. He wants to reach those goals. He’s put in the hard work and effort.”

Despite the praise and talk of his individual targets, Cobb remained team-oriented at Media Days.

Though Cobb’s focus is on the team, many have their eyes on him. Nebraska safety Corey Cooper said he didn’t remember much about the Cornhuskers’ 34-23 loss to the Gophers, but one player stuck out: Cobb.

“He’s a physical guy, a good player, somebody they leaned on heavily,” Cooper said. “He was a big part of [their] offense last year.”

And barring injury, he’ll be a big part this year, too.

Entering his senior season, Cobb said he needs to “be more of a threat on third downs” and work on “catching the balls, screens [and] understanding what the defense is taking away from me.”

Cobb will be aided by a veteran offensive line this season to help him do those things.

The presence of redshirt freshman Berkley Edwards should add another dimension to Minnesota’s running game this season.

In a conference that’s considered run-heavy, Minnesota seems solidified at the running back position.

“We are deep in the backfield, and we’ve got to find a way to utilize our backs,” Kill said. “In the past … we’ve been able to get three backs on the field and do a lot of different things.”

Jack Satzinger contributed to this report.