No. 4 Minnesota won eight of 10 matches against Nebraska. 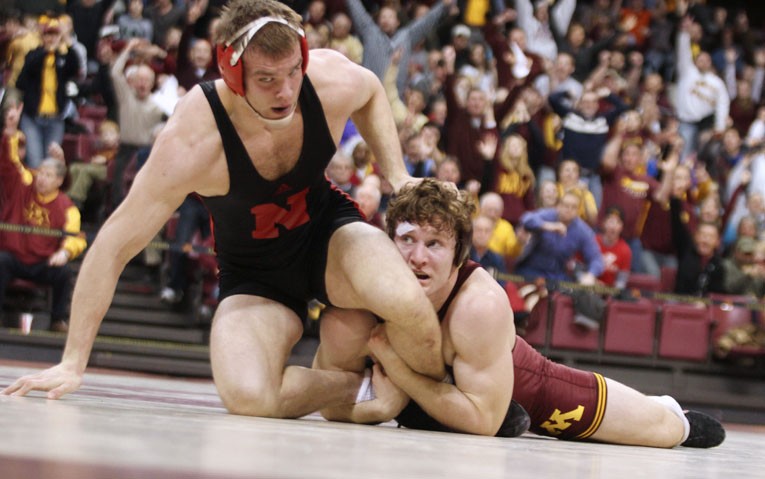 With former heavyweight national champion Brock Lesnar on the bench for the first half, the Gophers wrestling team defeated Nebraska 26-7 to capture a share of the Big Ten ConferenceâÄôs regular season dual meet crown.

âÄú[Winning the Big Ten] is big, because everybodyâÄôs in it,âÄù head coach J Robinson said. âÄúWe wrestled everybody. We wrestled all the top teams. So itâÄôs great because they earned it, this team earned that championship.âÄù

The dual started at 165 pounds, where Danny Zilverberg (165 pounds) filled in for Cody Yohn and lost 6-0 to Robert Kokesh. Robinson said he gave the struggling Yohn a break and that he expects him to be back on course soon.

âÄúWe wanted to change it up a little bit,âÄù Robinson said. âÄú[YohnâÄôs] just been in a little slump, and sometimes youâÄôve just got to back out and give him a little bit of a rest.âÄù

Kevin SteinhausâÄô match against Josh Ihnen (184) was the highlight of the dual. Steinhaus used a takedown at the buzzer to take a 3-1 lead. Ihnen received a point for riding time, making the final 3-2.

âÄúThe score was tied 1-1, but he had riding time. If I didnâÄôt get a takedown I was going to lose,âÄù Steinhaus said. âÄúThere wasnâÄôt very much time left, so I kind of threw myself under there on a move that I go to a lot and got the leg.âÄù

The first half of the dual was closely contested âÄî four of the five matches were decided by three points or less.

âÄúEvery win that we get helps build momentum for the next guy coming out of the tunnel,âÄù Steinhaus said. âÄúItâÄôs a lot easier mentally to get into if for that next guy if the guy in front of him wins the match.âÄù

Minnesota extended its match winning streak and won the first four matches after the intermission.

Robinson said he was impressed with how hard his team wrestled and that he was happy with the way they bounced back after last weekendâÄôs loss to Iowa.

âÄúThey wrestled tough. They wrestled the way we want them to wrestle,âÄù Robinson said. âÄúWeâÄôve talked a couple times about guys letting the close ones get away,  and today they made those things happen.

Zach Sanders (125) bounced back from his first loss of the season and beat Shawn Nagel by major decision, 24-13.

Lesnar was at the dual to present freshman Logan Storley (174) with the 2011 Junior Hodge Trophy, given to the nationâÄôs top high school wrestler as determined by Win Magazine.

Storley said he had about 150 friends and family in attendance, including members of his high school team.

âÄúIt was a good win, and I got my award in front of everyone,âÄù Storley said. âÄúNow we can start worrying about postseason and start getting after people and do what we need to do to be happy at the end of the year.âÄù