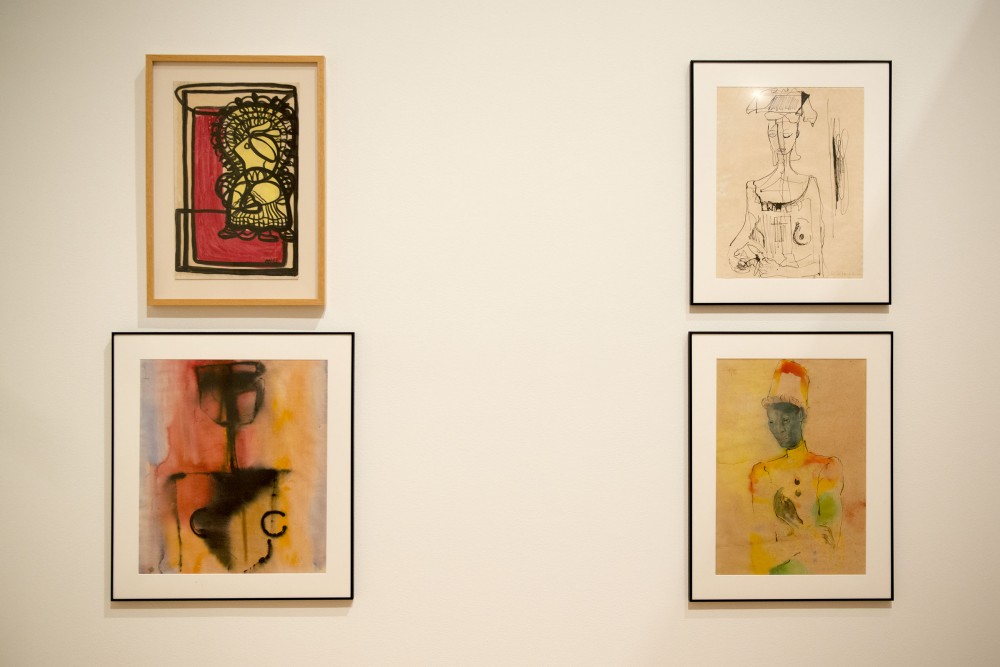 Pieces of art from the Weisman Art Museum's "Pan American Modernism: Avant-Garde Art in Latin America and the United States" exhibit hang in the museum on Oct. 3, 2016. The exhibit opens to the public on Oct. 9 and will be on display until Dec. 31, 2016.

The Lowe Art Museum’s traveling exhibit “Pan American Modernism: Avant-Garde Art in Latin America and the United States” is primarily concerned with the reclamation of what it means to be American.

The inspiration behind bringing the exhibit to the University of Minnesota campus is twofold. First, the WAM is trying to widen the scope in which American modernism is viewed.

The WAM is known for its 20th-century American modernist art, and they’re trying to create a more accurate view of the genre by enlisting the work of Latin Americans and Central Americans.

“And secondly,” exhibit curator Diane Mullin said, “We are committed to connecting with our community. That community is becoming more and more diverse in nature, and we have a flourishing Latin community here.”

The exhibit features more than 70 works of art, including paintings, sculptures, works on paper, photography and mixed media pieces. Each piece will be a part of a thematic section, helping museumgoers analyze how interconnected the art of the Americas is.

“‘Thematic sections’ is a museum term that describes conceptual groupings within a museum,” Mullin said. “‘Pan American Modernism’ has five such groupings that help tell a more nuanced story about the larger topic.”

Some of these sections will discuss topics like Mexican muralism and its legacy, as well as counterpoints — abstract expressionism and the Cuban avant-garde. Featured artists include Eduardo Abela, Manuel Alvarez Bravo, Gordon Matta-Clark and others.

The different mediums are also important in understanding the scope of the project. Each form is represented as a piece of a larger whole.

“Today’s transgressions of such distinct borders [between art forms] are in large part a reaction to the strict hierarchy placed on media,” Mullin said. “By including the more experimental work — especially work from the 1970s — we can see that there were postmodern pioneers across continents.”

In tandem with the exhibit, various events will focus on specific movements under the umbrella of Pan-American modernism. In November, local artist and nationally recognized muralist Rock Martinez will lead a workshop on the legacy of Mexican muralism and its role in local communities.

“We carefully planned for a diverse set of programs to accompany this exhibit,” Mullin said.

This connection is important. There’s typically a strong dismissal of varied, distinctive voices in America — American art critics tend to frame our southern neighbors as copycats. The goal of this exhibit is to marry both movements and make clear that they are interconnected.

“The beautiful thing about this exhibit is that the emerging scholars and curators who worked on it are showing the relationship between many American cultures and how it’s a lively, networked one,” Mullin said.

“Pan American Modernism: Avant-Garde Art in Latin America and the United States” opens on Oct. 9 and will run through Dec. 31 at the Weisman Art Museum.