Gophers gear up for battle of unbeaten

Both Minnesota and St. John's have yet to lose so far this season. 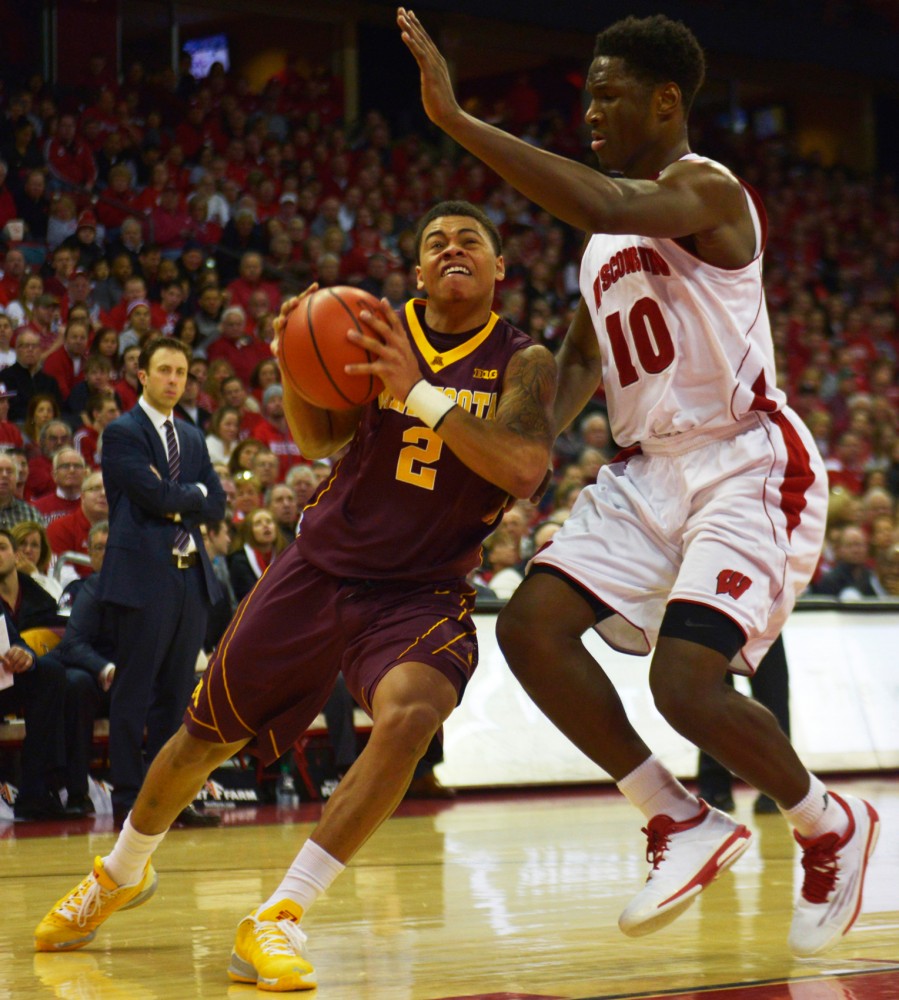 Minnesota guard Nate Mason drives the ball to the basket in the second half against the University of Wisconsin-Madison on Feb. 21, 2015 in Madison, Wis.

Minnesota will face its toughest challenge of the season so far this weekend, and on its own court.

The Gophers play the St. John’s University Red Storm Friday night at Williams Arena. Both teams are undefeated heading into the matchup.

“They remind me of us in the sense that there’s a new-found optimism, they signed some really good freshman, really good transfers sitting out,” said head coach Richard Pitino. “So you can tell they’ve got a renewed confidence.”

Minnesota is coming off a dominant game against Mount St. Mary’s. The Gophers won 80-56 and the Mountaineers shot 34.9 percent from field-goal range.

Pitino said he was happy with a lot but there was a lot they needed to do better.

“From a defensive standpoint, it was difficult cause they were playing five guards at a time, so it was good in the sense of putting us in a tough situation defensively,” Pitino said. “Turnover-wise, a couple really sloppy ones but I thought we passed the ball very well.”

Minnesota’s first three opponents are a combined 2-7 this season. All of Minnesota’s three wins have been double-digit victories.

Guard Dupree McBrayer has been shooting 69 percent from field-goal range this season. McBrayer is also averaging 13.7 points per game, tied for first on the team.

“He is confident, he’s a lot more confident this year,” said guard Akeem Springs. “I remember playing against him last year, he had a little bit of it, we went at it, but that’s what I really liked.”

McBrayer, a Queens, NY native, said he was offered and recruited by St. John’s.

“Just cause they’re St. John’s from Queens, NY, doesn’t mean anything,” McBrayer said. “I’m still gonna approach it as I would with any other game.”

The game against St. John’s is Minnesota’s third game of the week. The team has gone with the same starting lineup during the first two games.

Pitino said the team isn’t really going to do anything different because of the extra workload.

“We didn’t really practice on Tuesday,” Pitino said. “We’ll get some shots up [Thursday] and put them in a position to guard St. John’s stuff.”

Guard Nate Mason is tied for first in scoring with 13.7 points per game.

Mason said on Wednesday that everyone on the team is happy right now.

“Right now adversity really hasn’t hit, but once adversity hits, that’s when we’re gonna see what everyone’s about,” Mason said. “[But] we can tell that everybody likes playing with each other.”

Forward Eric Curry is the leading bench scorer for the team with 9 points per game. Curry also has 7.7 rebounds, which is the second most on the team.

“I think he’s been terrific,” Pitino said. “I think [Curry] is as good as a lot freshman out there. Offensively, he’s really good, I think he’s rebounded the ball well, he’s producing well.”

Minnesota has been out-rebounding its opponents with an average of 44-33 this season. The Red Storm is plus 2.5 in rebounding margin compared to the Gophers’ plus 11.

Assistant coach Kimani Young was a member of the coaching staff at St. John’s in the 2008-2009 season, but Pitino said he doesn’t think it will make the game any different.

“I just think he wants to win,” Pitino said.