The Gophers dominated lower division teams in their last meet before the Big Ten championships. 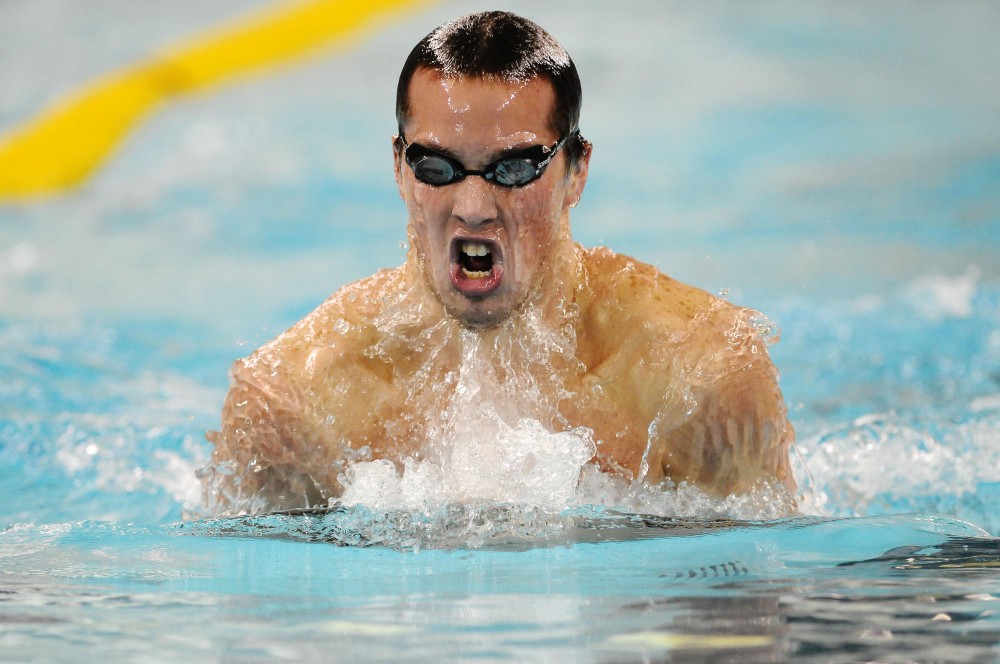 Minnesota Sophomore Kyler Van Swol surfaces for a breath during the 200-meter individual medley at the Aquatic Center on Friday night. The Gophers took the top 6 places in the 200 IM with Van Swol taking first with a time of 1:50.12.

The Gophers swimming and diving teams got a chance to beat up on the little guys one last time, as several regional schools flocked to the University Aquatic Center for the Minnesota Challenge over the weekend.

The meet marks the last competition the Gophers menâÄôs and womenâÄôs swimming and diving teams will have before the Big Ten championships.

The meet was not scored by team, but individual results were enough to prove the No. 16 menâÄôs and No. 15 womenâÄôs teamsâÄô supremacy. Together, the Gophers won 26 of 40 events.

Senior Kristoffer Jorgensen won both one-meter and three-meter diving with a score of 393.50. His performance on one-meter was the best for Minnesota this season. He said he felt that this final meet helped him prepare for the upcoming championships.

âÄúItâÄôs a longer meet. Big Tens will be the same amount of divers [as today], so all of our rituals will be pretty much the same,âÄù Jorgensen said.

Ross also took second behind Jorgensen in the one-meter dive with 369.70 points. Both were again NCAA Zone Diving qualifying marks.

âÄúItâÄôs a good dynamic for the team,âÄù diving coach Wenbo Chen said. âÄúWhile training they push each other well and also during the meet, they compete. ItâÄôs definitely an internal competition.âÄù

The women were equally impressive, but both teams had the big advantage of competing against smaller schools.

âÄúIt gives our entire roster a chance to find people from other programs to race and help them be better,âÄù head menâÄôs and womenâÄôs coach Kelly Kremer said. âÄúI really like this level of competition for where weâÄôre at right now and to fine-tune going into the Big Ten championships.âÄù

Freshman Tori Simenec stood out from her fellow swimmers after winning the 200-yard individual medley with an NCAA provisional qualifying time of 2 minutes, 1.40 seconds. Not only did she leave her fellow racers in her wake, but she also broke the meet record by almost two seconds.

âÄúI was surprised with how I did. I was not planning to go that fast,âÄù Simenec said. âÄúI have only swam that race once this season, so I wanted to get in another swim before Big Ten. It is just a little more experience with the race, and I was trying to get a faster seed time [for the Big Ten championships].âÄù

Keefer bested the previous meet record on the three-meter dive with 340.80 points. McCrady took second in three-meter with 311.35 points. Both results were again NCAA qualifying marks.

Tess Behrens and Elizabeth Weitz swam to first-place meet records in the 100 freestyle and 200 breaststroke, respectively. Senior Kristen Steenvoorden accomplished the same feat in the 500 freestyle.

Both teams will get a break from competition next weekend. The women will return to action Feb. 15-18 at the Big Ten championships. The men will swim at the same competition Feb. 22-25.