Rather than having a chief of staff, the office will consist of two teams: one focusing on operations and the other on strategy. 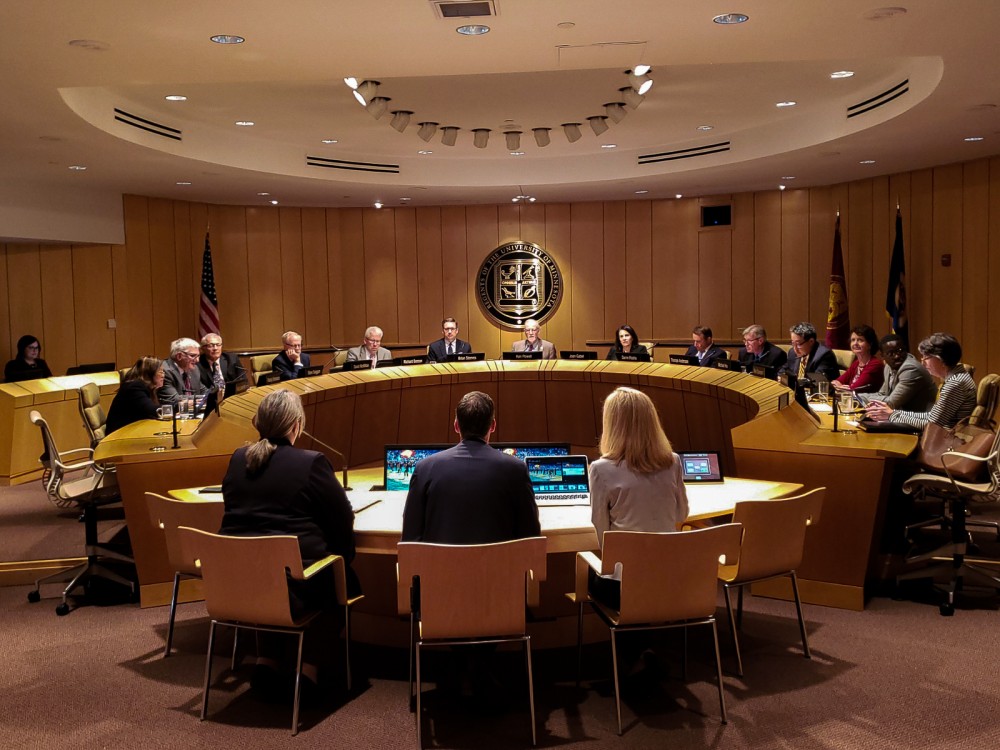 The University's Board of Regents meets on Thursday, July 11 at McNamara Alumni Center in Minneapolis.

The University of Minnesota’s Board of Regents welcomed President Joan Gabel in her first board meeting since taking the reins as president on July 1.

In her first report to the board, Gabel said she has met with leaders at all levels across the state during the more than six-month transition process and set up her team so they were ready to work when she took over.

“I can hear and feel the national winds blowing, and I recognize the challenges on our doorstep, but we’re undeterred and rather are filled with hope and optimism, for it is a new day at the University,” Gabel said at the meeting.

Gabel’s arrival is one of several changes for the board in recent months, with the legislature selecting four new regents in May, appointing a new chair and vice chair last month and most of the board committees seeing new leadership.

With the goal of being “responsive, but also to be lean and nimble,” Gabel said she reorganized how the president’s office is staffed, creating two teams: one for operations and another for strategy. Unlike former University President Eric Kaler, Gabel will not have a chief of staff, instead a leader for each team.

She said the office has an “overall reduction in headcount and cost.” It has two fewer people and costs about 5 percent less than Kaler’s staff. The operations team is mainly focused on the day-to-day workings of the University, but Gabel said there is no strict dividing line between these two teams.

“The president’s office is also responsible for making sure that we’re looking ahead and thinking ahead and facilitating that forward thinking of all of the faculty and staff and students that are on all of our campuses,” Gabel said at a press conference following the meeting. “That’s the primary role of the strategy team, of course, anchored in what is likely to become the next strategic plan for the system which will probably begin work on very soon.”

The vision for that plan will be discussed at a retreat with regents and Gabel Thursday and Friday.

The strategy team will be led by Bill Haldeman, who follows Gabel from the University of South Carolina, with the operations team being headed up by Kate Stuckert, who comes from the provost’s office. The new staff includes many holdovers from Kaler’s staff and some newcomers, who Gabel assured are ready for the cold.

Director of Athletics Mark Coyle presented his yearly report to board, highlighting the University being alone among schools in the five largest athletic conferences to have a winning record in every team sport, detailing facility improvements and outlining the budget for the current fiscal year.

The athletic department plans to increase its budget by about $2 million this year, anticipating higher expenses for personnel and for athletic scholarships due to increases in non-resident, non-reciprocity tuition.

In the last fiscal year, the department ranked near the middle of the Big Ten in spending, coming in at eighth highest. Personnel expenses are the largest expenditure for the department, making up 35 percent of its budget, while scholarships will make up 11 percent and debt payment makes up 9 percent.

The department completed projects on five facilities in the past year, including turf replacement at TCF Bank Stadium and opening a new track and field stadium, and have three ongoing projects, including work on the Volleyball Performance Center.

The board gave Gabel the authority to create the Advisory Council on Rare Diseases. The state Legislature passed a law last session instructing the board to create the council and provided it with $150,000 a year for four years in funding. The funding is not meant for research, rather to work with state agencies to develop information and programs for the public relating to the diagnosis, treatment and awareness of rare diseases.

The University Alumni Association gave its yearly presentation to the board, where it talked about the networks across the country and the world they have for nearly 600,000 alumni systemwide. Gifts to the University totaled over $320 million in the 2019 fiscal year, up about $25 million from the previous year. Also noted was the addition of an alumni network for the Rochester campus in the last year, which is part of the Twin Cities campus alumni association.