Mathieu Froment and Jack Hamburg went 13-2 as a duo during the season. 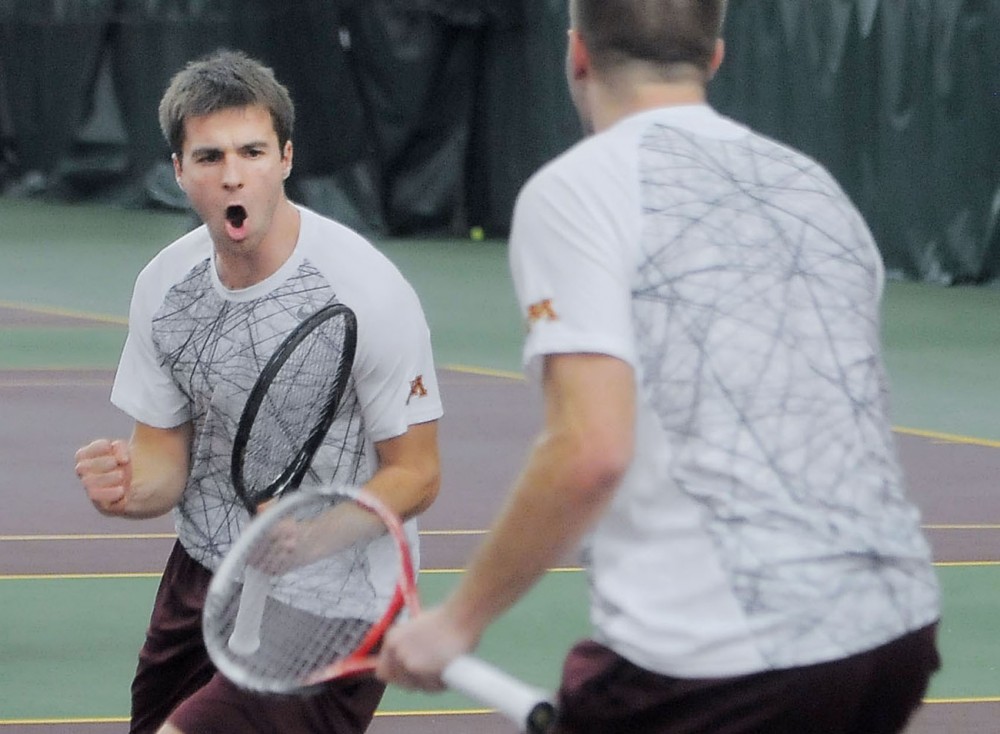 Minnesota doubles partners Mathieu Froment and Jack Hamburg celebrate after a victory against Tulsa on Friday at the Baseline Tennis Center.

Jack Hamburg and Mathieu Froment didn’t identify as doubles players when they first arrived on campus.

Like many successful tennis players, they came to college focused primarily on the singles game.

A few years later, things have changed. These days, Hamburg and Froment appear most comfortable standing side by side on the tennis court.

Both players have been serviceable on the singles courts this season — Hamburg is 10-9, primarily at the No. 3 spot, and Froment is 12-7, mainly at the No. 4 spot. When asked if they take more pride in singles or doubles, the two smiled and responded in near unison.

Success. That has molded the two into a tenacious tandem.

Hamburg and Froment went 13-2 during the regular season, which featured a 13-match winning streak. That record has the two sitting at No. 27 in the Intercollegiate Tennis Association’s rankings.

They are on the fringe of an NCAA tournament bid — something Hamburg said the duo is well aware of heading into this weekend’s Big Ten tournament.

“That is definitely on our minds,” he said. “We just need to stay focused and try to do our best each match.”

Froment said the possibility of making the NCAA tournament wasn’t even on his radar entering college, especially not in doubles.

He and Hamburg first joined forces last season and went a mediocre 7-8. They experienced success during fall 2013, which sprouted confidence coming into the spring season.

“I think we’ve found that we can beat some really good teams,” Hamburg said. “We’re like, ‘OK. Any team we play we can stand up against.’ That’s been our attitude whenever we go out on the court.”

Those strengths meld well together and allow the two to be the aggressors in each match.

“We want to be the ones who, in the volleys, are finishing at the net,” Hamburg said.

Hamburg credited the aggressive mentality for a portion of the duo’s success, but Froment attributed the success to familiarity — something Young said certainly helps in doubles.

“We know exactly what shots we’re going to hit on certain points,” Hamburg said. “We know where we’re going to stand. We know which balls are going to be to which guys. … I think all that just adds up.”

It adds up to a confidence in each other, Froment said. He said the duo faced three or four match points this year, and each time, he felt like Hamburg was going to make a big play.

“I’m really confident in Jack, more than last year,” Froment said. “That’s a big difference. We know each other. We know that we can do big things.”

Hamburg and Froment both hope to do one last big thing this season and earn that elusive NCAA doubles bid.

“It would be great,” Froment said. “It’d be such a great experience.”