Arrigoni House West, a sober house in Marcy-Holmes, is working to boost community involvement for its residents. 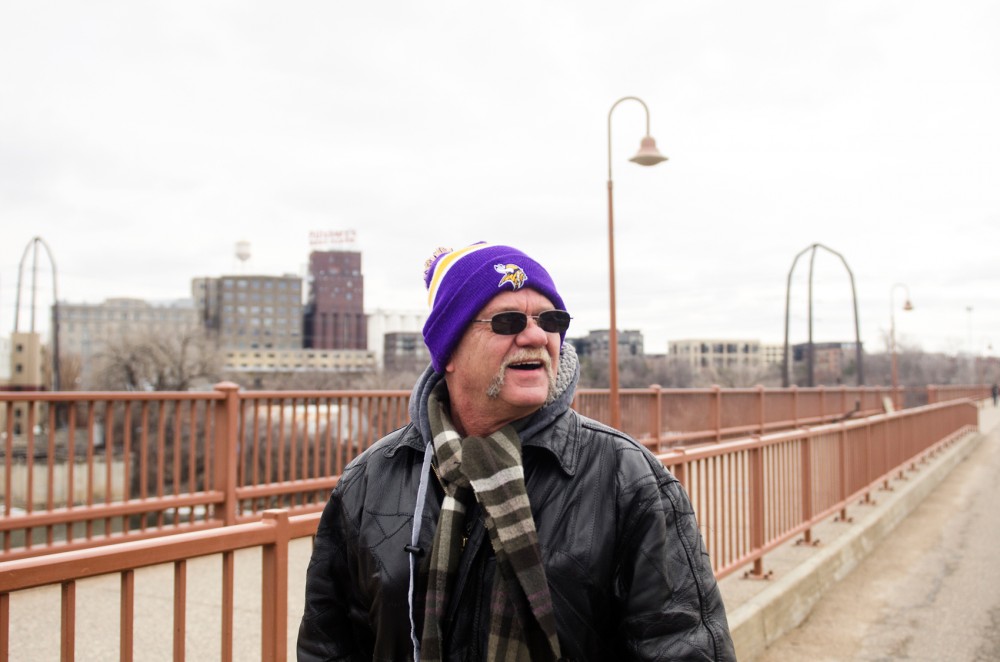 Minneapolis resident Thomas Jones walks along the Stone Arch Bridge on Sunday afternoon. In November, Jones moved into the Arrigoni House West, a sober residence in the Marcy-Holmes neighborhood for men overcoming chemical addictions. Jones says going for walks are one of the frequent group activities he enjoys doing.

Benjamin Farniok
When alcohol poisoning sent him to the hospital in an ambulance, Thomas Jones said he didn’t have much to live for.
Now, with help from a local sober house, he’s been sober more than a year.
Jones’ current address, Arrigoni House West, sits on University Avenue Southeast in the Marcy-Holmes neighborhood. Supportive Living Solutions — which runs the home and others like it — already gives money to local charities but is now looking to get its residents involved with volunteer work, said Ryan Dieveney, business development director with SLS.
“We are really dedicated to improving our local communities,” he said.
SLS has six houses in the Twin Cities to shelter and provide services to people who struggle with chemical dependency issues, long-term homelessness or persistent mental illnesses.
Last summer, Matt Hauge, a 22-year-old resident of the house, spent six hours helping a neighbor woman who needed to clean out her garage, Arrigoni West director Kevin Fruetel said.
Hauge said he’s lived at the house for about 10 months, but the job came shortly after moving in. He said he leapt at the chance to help out after years of heroin abuse left his life in disarray.
“I figured that this lady needs help, and if I’m able to do it, it’d be sort of good to give back,” he said, adding it was a nice way to get out of the house.
Hauge said he’d been in treatment twice before coming to the house and said the transition back to his old life always led him to use again.
“Being in a house with 33 guys isn’t always the best, but it’s something that I can build my recovery around, and it has been for the last 10 months,” he said.
The house is government-funded and free for some of its residents. Hauge said not worrying about certain everyday pressures has allowed him to focus on recovery and getting his life together.
Now, Hauge is working toward his GED diploma through Summit Academy OIC, where he hopes to learn to operate heavy equipment.
Jones said many people in recovery at the house could be attracted to helping out in the community.
Jones said that Arrigoni East, where he lived for a year, involves its tenants with the surrounding communities, usually by doing odd jobs for people around the neighborhood.
Working to help the community can be a beneficial part of someone’s treatment, Jones said, adding that part of learning to live and be productive after substance abuse is figuring out how to give back.
“The program saved my life,” he said.
Melissa Bean, executive director of the Marcy-Holmes Neighborhood Association, said more discussions are needed, but MHNA has a number of future projects they would be excited to have house residents lend a hand with, like the annual Mississippi River cleanup and tending to neighborhood gardens.
Hauge said he wants to continue to pitch in to help his community.
“I’ve definitely took a toll on my community from using and stealing and abusing people, both physically and mentally, that I’m definitely willing to help give back,” he said.
Delete Image
Align Left
Align Center
Align Right
Align Left
Align Center
Delete Heading