Local painter Shawn McNulty is on top of his art — literally. 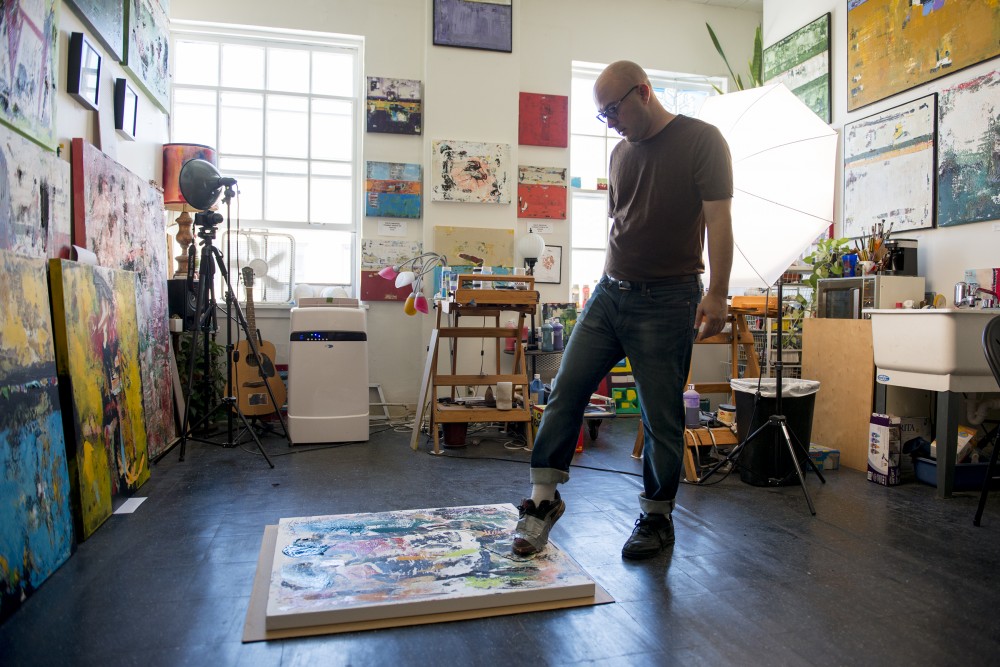 Artist Shawn McNulty works on a painting in his studio on Sept. 9, 2016. McNulty's process of painting includes a shoe palette knife and is being featured at the Fall Fine Arts Show through the Northeast Minneapolis Art Association.

The studio — a long rectangular corridor — is lined from floor to ceiling with works-in-progress. Elvis Costello plays loudly in the background; a pug roams.

In the center of the floor is a canvas, still recovering from hosting the palette knife dance that is Shawn McNulty’s preferred painting technique.

McNulty, a Minneapolitan abstract expressionist painter, is lounging in the artistic freedom of having recently completed a painting for the U.S. Bank Stadium.

“Focusing on the Vikings project for so long, just being released from that and going back to open form is exciting,” McNulty said.

Two of his paintings will be on display in the stadium’s Valhalla Suites. McNulty was one of 34 artists chosen from almost 1,200 submissions.

McNulty, a Minnesota native, studied art and psychology at St. John’s University. He never anticipated a future as a painter.

“We had a house in Uptown. Somebody moved out and as an artist I was like, ‘Can somebody paint in there?’” McNulty said.

Since his humble beginnings in an abandoned room, McNulty’s career and technique have burgeoned simultaneously.

“The method itself has evolved to be shoe-palette-knife almost exclusively,” McNulty said.

The shoe-palette-knife, a painting utensil that McNulty invented, is at its core, a palette knife attached to sneakers. The tool is used to accomplish his signature aesthetic of soft color fields amid sharp, geometric textures.

To be clear — no eccentric marketing plan is at work.

“I wouldn’t come out and say I paint like this,” McNulty said about his technique. “I think the method is important, [but] I think the piece that exists is of ultimate importance.”

In fact, McNulty spoke very little of his unique technique. Instead, he chose to elaborate on the unique forms and colors that inhabit his pieces.

“I think the forms happen organically, but they need nurturing,” McNulty said. “I allow enough spontaneity in the first layer that the forms appear and I just choose.”

Abstract expressionism is nothing new, but McNulty has made his own space on the gallery wall.

“[My paintings] are a weird combination where my process is more action painting. It’s jagged and violent, but the result is more peaceful,” McNulty said, addressing predecessors like Jackson Pollock.

McNulty isn’t worried about being labeled with modern and abstract art’s oft-pretentious reputation.

“I think that people who aren’t into art in general don’t get abstraction,” McNulty said. “It’s like music or jazz. Like, why is Miles Davis good and why is someone else bad? I think a lot of it is instinct … I like to say, ‘If you like it for whatever reason, then that’s fine.’”

McNulty’s personal affinity for abstract painting comes from the ambiguity.

“[It’s] more mysterious — more confusing — to some people. You can be on two totally different sides of things, and I like that,” he said.

Despite a degree in psychology, McNulty wasn’t too interpretive of his painting’s deeper meanings. He did, however, settle for one explanation.

“One interpretation of my work that I kind of like is an interaction between the id and the superego … I think the paintings could represent that.”

McNulty will be exhibiting a painting at the Fall Fine Arts Show for the Northeast Minneapolis Arts Association from Sept. 16 to Sept. 25.

As for his future with painting, McNulty wants to continue to explore the medium.

“There [are] still places to go with painting that we haven’t gone yet,” he said.

One shoe-palette-knife at a time.