Two other Big Ten teams will also be playing for a Final Four spot in Iowa. 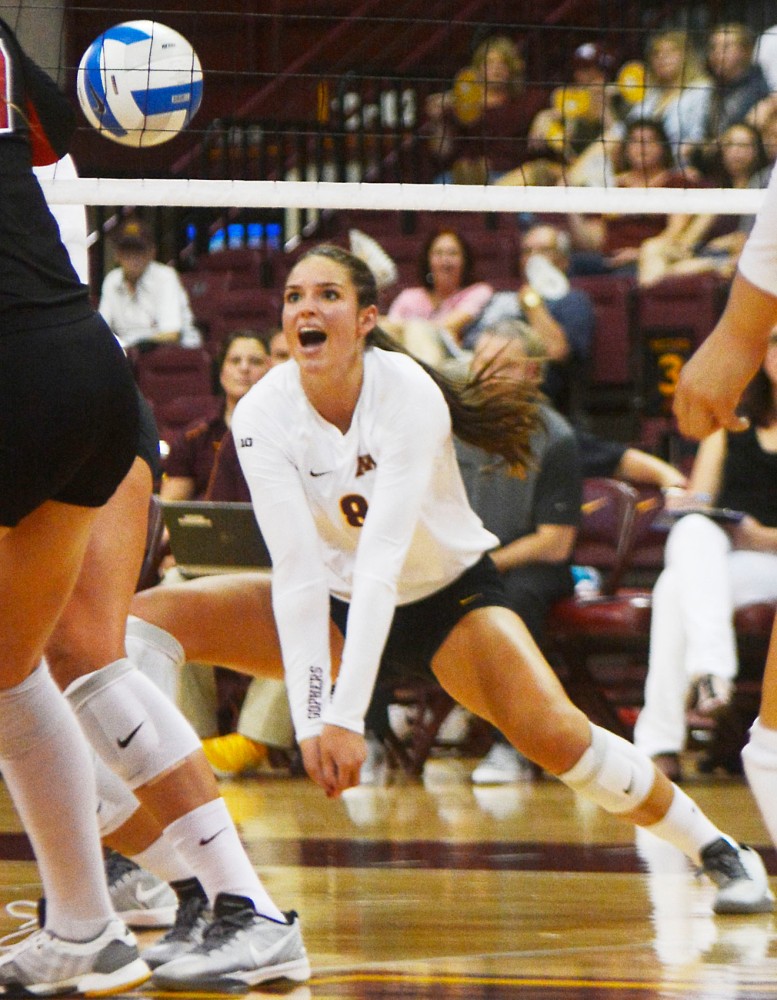 University of Minnesota outside hitter Sarah Wilhite lunges for the ball on Aug. 30, 2014 at the Sports Pavilion.

Emily Polglaze
The NCAA Volleyball Tournament has been narrowed down to a field of 16, but the Gophers are already acquainted with a number of the teams still alive.
Minnesota is in the same regional bracket as Big Ten foes Illinois and Penn State, and three other teams from the conference are still standing as well.
“We’ve been saying all along that, at least in our opinion, the Big Ten is the strongest conference in the country,” head coach Hugh McCutcheon said. “It seems that that has played out in terms of the tournament and the results.”
The Big Ten had the most teams of any conference in the NCAA tournament when it started, with nine of its 14 programs being selected.
The Big Ten had only six programs received in the tournament last year, and Minnesota was not one of them.
The Gophers won the Big Ten championship this season, earning only the second title in program history on their way to the NCAA tournament’s No. 2 overall seed.
Minnesota advanced to the Des Moines regional this weekend after sweeping Jackson State and Marquette at home in the first two rounds of the tournament last weekend.
The winner of the four-team regional will advance to the Final Four in Omaha, Neb., the following weekend.
Three of the four teams in the regional are from the Big Ten, so the conference is likely to get a Final Four representative out of Des Moines.
The Gophers will play Illinois in the third round of the tournament, while Penn State and Hawaii will play in the other match of the regional.
Minnesota and Illinois is the only matchup in the round of 16 that’s between two teams from the same conference.
“It’s nice that we’re familiar with the teams and that we’ve seen them before,” junior middle blocker Paige Tapp said. “But throughout the season everyone is getting better, so we’re definitely just taking it like another game and preparing for what they’ve become, not who they were.”
The Gophers only played the Illini once this season, a 3-2 victory at the Sports Pavilion on Oct. 3.
Minnesota was down 2-1 after three sets but rallied for an extra set victory. The Gophers outscored the Illini 40-16 in the final two sets.
Another conference matchup could await Minnesota if it gets past Illinois with Penn State on the other side of the regional.
The Gophers dealt the Nittany Lions their first set loss of the season on the road Sept. 26 in a 3-2 loss.
Minnesota swept Penn State in their second meeting of the season on Nov. 14 at the Sports Pavilion as part of the Gophers’ 15-match winning streak.
With Illinois and potentially Penn State up ahead, Minnesota will have to beat familiar foes to make it to the Final Four.
“I think it really proves that the Big Ten is tough, but it also gives us some confidence going in, winning the Big Ten championship,” junior outside hitter Sarah Wilhite said.
“We’ve played a lot of tough competition, and they deserve to be here, too.”
Delete Image
Align Left
Align Center
Align Right
Align Left
Align Center
Delete Heading