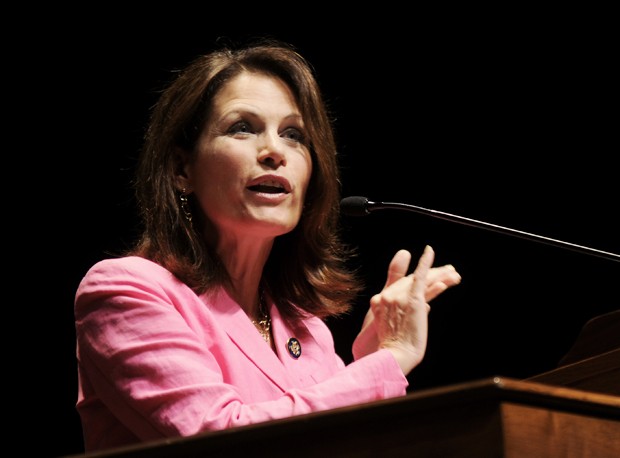 WASHINGTON âÄî Chanting “Kill the bill,” thousands of conservatives incensed over the Democrats’ health care overhaul protested at the Capitol on Thursday, arguing that the legislation amounts to a government takeover of the nation’s medical system. The crowd, invited on national television by Rep. Michele Bachmann, R-Minn., was staunchly anti-government âÄî “Politicians lie, people die,” read one sign âÄî but loudly cheered the House Republicans who hosted the event. The protest attracted many of the so-called Tea Party demonstrators angry with increased spending and an expanded government role under the Obama administration. “This bill is the greatest threat to freedom that I have seen,” House Republican leader John Boehner of Ohio told the crowd. “We’re not going to leave this Hill until we kill this bill,” declared Rep. Steve King, R-Iowa. That’s highly unlikely. House Democrats hope to pass the sweeping legislation on Saturday, buoyed by endorsements on Thursday from the American Medical Association and the AARP, the powerful seniors lobby. President Barack Obama makes a final appeal to Democrats during a rare visit to the Capitol Friday. Republican leaders controlled their event, focusing on what they said were the flaws in the Democratic bill, as they distanced themselves from Bachmann’s invitation. On Oct. 30, she invited viewers of Fox News to Washington to roam House office buildings and confront lawmakers. “I’d love to have every one of your viewers join me so that we can go up and down through the halls,” Bachmann said. “Find members of Congress, look at the whites of their eyes and say, ‘Don’t take away my health care.'” Republicans have offered a slimmed-down health care bill that focuses on reducing costs rather than increasing coverage for millions of uninsured Americans. At the rally on the West Front of the Capitol, they mocked the 1,990-page Democratic bill, bound in a gold cord, on the corner of the lectern. It was so heavy, at one point it thunked to the ground. The crowd, including many older Americans, carried placards that ranged from pithy âÄî “Free health care isn’t free” âÄî to harsh. “Ken-ya Trust Obama?” said one, referencing the president’s African roots and claims by some that he wasn’t born in the United States. One protester carried a sign reading, “Bury Obamacare with Kennedy,” a reference to Sen. Edward Kennedy, D-Mass., who died of brain cancer this past summer. The demonstrators came to Washington by plane, bus and other means to send a message to House Speaker Nancy Pelosi, D-Calif., and Senate Majority Leader Harry Reid, D-Nev., as they press ahead with health care legislation. “It’s upsetting because of where we’ve come from to where we are today, to see our freedom eroding,” said Ben Fourman, 72, of Farmingdale, N.J. The retiree wore a T-shirt that said, “Liberty equals limited government.” Actors Jon Voight and John Radcliffe, who played Cliff on the comedy series “Cheers,” attended but the real star was Bachmann. “We want Michele! We want Michele,” the crowd chanted as she took the microphone. Bachmann, a favorite of conservatives for her colorful rhetoric, issued a reality check about the bill’s outsized chances of passing. But she added a dash of optimism gleaned from Republican victories on Election Day. “Kill the bill! Kill the bill!” the crowd chanted. “Yes, that’s exactly what you’re going to tell them,” said Bachmann. Capitol Police arrested a dozen anti-abortion protesters in the hall outside Pelosi’s office in the Cannon House Office Building. Elsewhere, Siler City, N.C., resident Paul Kaufman and nine family members stopped by the offices of Reps. Mel Watt, D-N.C., and Walter Jones, R-N.C. “I feel like I’m defending my freedom. I’m defending my rights,” Kaufman said, adding that he identified with a sign he saw at the rally that said “I love my country, but I’m afraid of my government.” – Associated Press writer Ann Sanner contributed to this report.