Minnesota hosts No. 7 Bemidji State, a team that has yet to lose this season. 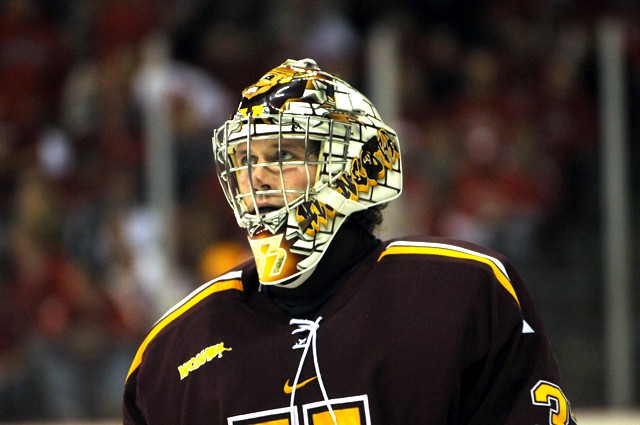 The Gophers menâÄôs hockey team will play its first non-conference opponent this weekend but donâÄôt expect a drop in competition come Saturday night. Minnesota, 3-4-1, will host No. 7 Bemidji State (7-0-1 overall, 4-0-0 College Hockey America) in a two-game series, and while the Gophers have dominated the Beavers in years past, Minnesota enters this series as the underdog. âÄúOn paper, theyâÄôre better than us,âÄù senior Tony Lucia said. âÄúWe need to go out and prove ourselves, and if weâÄôre going to do that, we need to do that against top-10 teams, and right now theyâÄôre ranked seventh.âÄù Bemidji State enters this series with an eight-game unbeaten streak , top in the nation. The hot start follows a deep run last year, which culminated in an appearance in the NCAA Frozen Four. âÄúTheyâÄôre used to winning right now,âÄù head coach Don Lucia said. âÄúYou look at the end of last year, the success they had and the run they had, then they start out the year and they havenâÄôt lost yet; winning breeds winning.âÄù Minnesota last played Bemidji State in 2004. Starting next year they will meet much more frequently, as the Beavers will join the University of Nebraska-Omaha as Western Collegiate Hockey Association members beginning in the 2010-11 sea son. âÄúObviously we petitioned hard and fought hard for Bemidji to be a member of the league,âÄù Don Lucia said. âÄúI think it was the right thing to do, and I think you see that with their on-ice success âÄ¦ theyâÄôre going to be tremendous members of the WCHA.âÄù While Bemidji State will join the WCHA next year, this year they are still a non-conference opponent for the Gophers, meaning this series could go a long way in helping MinnesotaâÄôs postseason aspirations in terms of improving their pairwise rankings, which determine which teams qualify for the NCAA Tournament. âÄúAs it turns out, itâÄôs good for us that weâÄôre playing Bemidji because of their record,âÄù Don Lucia said. âÄúTheyâÄôre going to have a good record this year, and thatâÄôs certainly going to help strength of schedule and all those things.âÄù Minnesota enters this series on a hot streak of its own, winners of three of its previous four games. However, the Gophers are dealing with the losses of two key players in freshman Nick Leddy and senior Jay Barriball to injury and the sudden departure of sophomore Sam Lofquist . Tony Lucia thinks having a veteran team helps deal with the changes the GophersâÄô roster is experiencing so early in the season. âÄúYou know how to cope with it,âÄù Tony Lucia said. âÄúThe coaching staff recruits players every year to step in and play roles; theyâÄôre getting roles and opportunities a little bit earlier than maybe they expected.âÄù One newcomer making an immediate impact is Zach Budish . The freshman has scored four points on the year, including three in last SaturdayâÄôs win over Wisconsin. âÄúI felt like IâÄôve played well in the first couple of games, contributing more offensively now,âÄù Budish said. âÄúIâÄôd just like to continue to do that and do what I can to make the team win.âÄù On the defensive end, after a career best 45-save effort last Saturday, junior Alex Kangas has started to regain the form of his freshman year, and the sharp play between the pipes by both Kangas and sophomore Kent Patterson has stood out to Don Lucia as one of the teamâÄôs strengths early in the season. âÄúOverall, theyâÄôre playing at a pretty high level,âÄù Don Lucia said. âÄúNow weâÄôre starting to score some goals, and thatâÄôs what you have to do if youâÄôre going to win; you just canâÄôt rely on your goaltender to win you a 2-1 game every night.âÄù While pleased with KangasâÄô performance, Don Lucia said Kent Patterson has a âÄúgood chanceâÄù of playing this weekend, so look for the Kangas-Patterson platoon to return after a two-series absence. Filling in for the injured Barriball on the first line, sophomore Nico Sacchetti will likely remain on the right wing following a solid âÄî if not spectacular âÄî two-game series. The Gophers will play Saturday and Sunday at Mariucci Arena, with the games pushed back from their usual slate due to the opening of the menâÄôs basketball regular season Friday. The Saturday game will be at 7:30 p.m., and the Sunday contest will start at 6 p.m.