Gophers improved to 6-2-0 over the weekend 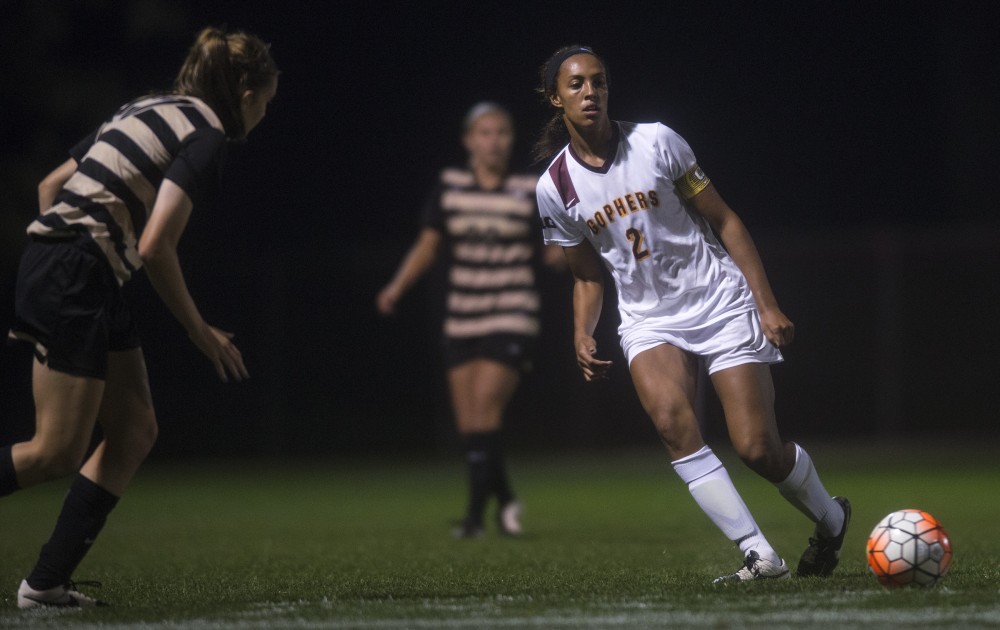 The Gophers were looking for a chance at redemption Sunday and delivered in a close victory to split the weekend’s two matches.

Minnesota fell 4-1 Friday to Stanford but capped off the weekend with a 2-1 win against Santa Clara Sunday to close out the team’s non-conference schedule with a 6-2 record.

“We scheduled these tough opponents for a reason,” Gophers associate head coach Krystle Seidel said. “We’re talking about top 20 programs in the country consistently in the top 20. That’s what we need to prepare for the Big Ten.”

No. 2 Stanford, 6-0-1, struck first in Friday’s match with a goal from freshman Jordan DiBiasi about five minutes into the game.

Freshman Tierna Davidson quickly followed up with a rebound goal to help the Cardinal jump out to a 2-0 lead following the first half.

No. 10 Minnesota, 6-2-0, started the second half with a goal from sophomore forward April Bockin in the 48th minute that came off a cross from junior forward and defender Kellie McGahn.

Junior Andi Sullivan scored on a free kick in the 66th minute for Stanford to take a 3-1 lead.

Minnesota couldn’t forge a comeback, and Stanford scored another goal to seal a 4-1 victory. The match was Minnesota’s second loss of the season.

The Cardinal took 22 shots total and put 11 on target to Minnesota’s 10. The four goals allowed made for the greatest offensive output by any opponent the Gophers have seen so far.

A day off seemed to suit Minnesota well, and the team started strong against Santa Clara, 2-3-3, Sunday.

The Gophers were awarded a penalty kick five minutes into the game, and senior captain Simone Kolander converted on the opportunity to give Minnesota a quick 1-0 lead.

Kolander said her decision- making depends on where she is on the field, and though she likes to get teammates involved in the attack, she took the chance on the kick.

Santa Clara struck back with a goal from sophomore Jordan Jesolva in the 33rd minute to tie the game heading into halftime.

Both teams had two yellow cards each issued in the aggressive second half, with senior defender Rashida Beal and junior defender and forward Maddie Gaffney taking the pair for Minnesota.

“During games that are really physical it can be a little bit difficult,” Beal said. “Everybody’s emotions get a little high, and people get frustrated with different calls.”

Kolander regained the lead for Minnesota in the 70th minute with her second goal of the game, assisted by senior midfielder Josee Stiever.

Minnesota kept attacking Santa Clara’s goal after getting ahead and held the Broncos off for the remainder of the game to come away with a 2-1 victory.

“[Head coach Stefanie Golan] encourages us to keep pressing and take them on but also to be smart and not having defenders join the attack too much,” Kolander said.