Researchers say the research could lead to treatments for aging and cancer. 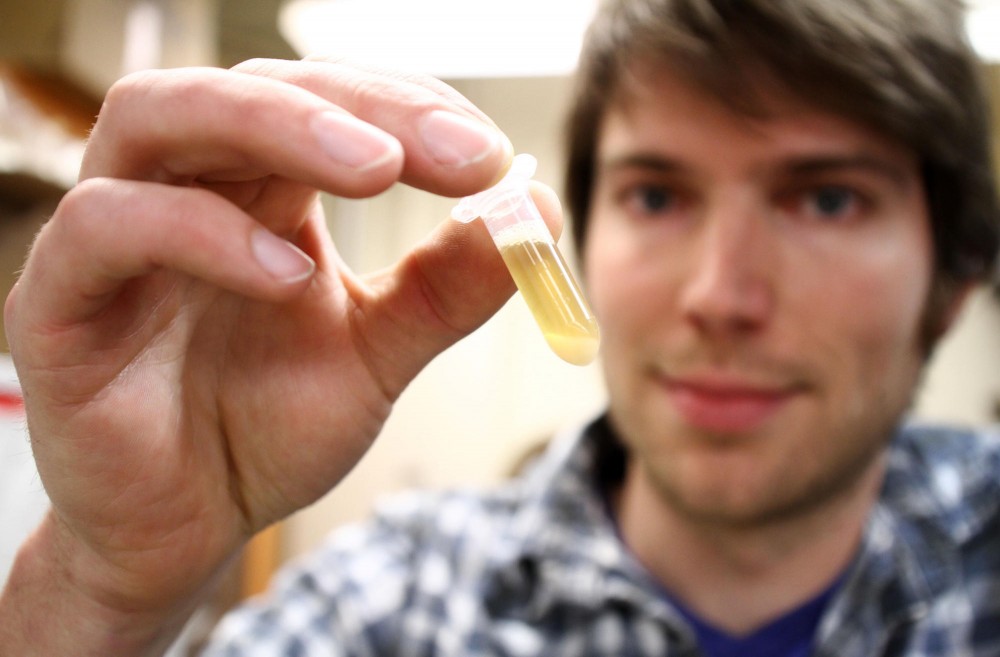 William Ratcliff, a postdoctoral associate in the department of ecology, evolution and behavior at the University of Minnesota, holds up a tube of yeast that has just clustered Monday, January 23 at Snyder Hall in Saint Paul.

A lab, vials, yeast and careful documentation âÄî some of the simple ingredients University of Minnesota researchers needed to reproduce an ancient evolutionary event in just two weeks.

But the implications of witnessing singled-celled brewerâÄôs yeast evolve into more complex, multi-celled organisms, are great.

The experiment, headed by William Ratcliff and Michael Travisano, helps explain how life moved from mere microbes to multi-cellular creatures. It was published January in the journal Proceedings of the National Academy of Sciences.

The beauty of the experiment is its simplicity, said Josh Rosenau, a director at the National Center for Science Education.

âÄúBrewerâÄôs yeast is something you can get at the store. You can do this experiment in a classroom, and students can trace it through in school,âÄù he said.

School classrooms are starting to develop a capacity for the same kinds of DNA work that University researchers do, he said.

But the biggest breakthrough lies in showing how quickly evolutionary changes can occur.

The question becomes why it took so long on Earth in the first place, Ratcliff said.

Ratcliff and Travisano came up with the idea about two years ago, wondering what would happen if single-celled organisms were exposed to environments favoring mutations.

Each day, they allowed vials of yeast to settle, keeping only the bottom liquid where cell clusters were likely to form. Soon, the yeast was sinking more rapidly and then evolving into multi-cellular bodies resembling snowflakes.

Instead of simply sticking together by bumping into each other, the yeast cells had adapted genetically identical material, growing more like human cells.

The cells also developed a âÄúdivision of labor,âÄù Travisano said, similar to different kinds of cells in the human body.

During the process, Ratcliff and Travisano recruited many undergraduate researchers.

Aside from washing dishes, Amanda Muehlbauer, a College of Science and Engineering math major, did a lot of microscopy work and data collection with the yeast, taking countless pictures of cells.

She also spent a lot of time going through time-lapse images to track the size of the snowflakes.

âÄúThis lab makes it a priority to keep their undergrads totally engaged with the project,âÄù she said.

Muehlbauer was excited to have worked on a project published in a prestigious national science journal.

âÄúItâÄôs awesome. ItâÄôs unbelievably cool to have been part of an experiment that has so many possibilities for exploration.âÄù

The experiment is also easy to repeat.

âÄúWhy do it once when you can do it 10 times?âÄù Travisano said.

The researchers will continue to experiment with the evolved yeast, and a next step is to work with algae to replicate the experiment, Ratcliff said.

He hopes his research will continue revealing the secrets of a âÄúvery elusiveâÄù period of evolutionary history.

âÄúFor me, the exciting part is that this experiment raises more questions than it answers,âÄù Muehlbauer said.

âÄúIt will be interesting to see how this research unfolds.âÄù