The proposal is to eliminate the Minneapolis Civil Rights Complaints Investigation unit due to budget cuts. 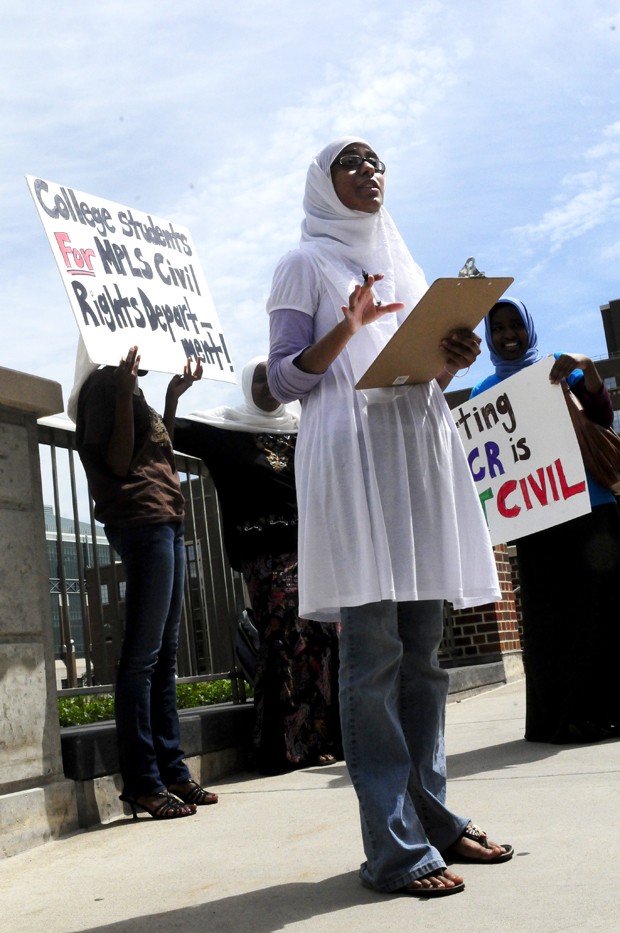 University of Minnesota undergraduate Lolla Mohammed Nur, along with about 12 other students, sat silently with posters at a city meeting last week, protesting a proposal to eliminate the Minneapolis Civil Rights Complaint Investigation Unit. Now the political science and journalism junior, along with a coalition of University students and student groups, are garnering petition signatures against the proposal that they say could leave leagues of civil rights violations unchecked. The unit, which is part of the cityâÄôs Civil Rights Department , is comprised of attorneys who are charged with investigating the more than 200 civil rights complaints the unit gets a year, such as employment, public service or educational complaints. Minneapolis Mayor R.T. Rybak proposed to cut the unit in February at the behest of Gov. Tim Pawlenty, who said the state Human Rights Department already handles such cases. But instead of an immediate cut, the Minneapolis City Council opted to create a task force to look into other ways the Civil Rights Department can cut costs and preserve the mission of the investigation unit. The task force was set to deliver a set of recommendations to the council and the mayor at a Health, Energy and Environment committee meeting last Tuesday, where Mohammed Nur and other University students sat silently with posters, but the recommendations were postponed until July 20.

Calling students to action
Mohammed Nur didnâÄôt know about the proposal until it was discussed at an ice cream social she attended several weeks ago. âÄúThis was proposed several months ago, and IâÄôm only hearing about it now, and I thought, âÄòI wonder how many other people donâÄôt know about this,âÄôâÄù she said. Intent on spreading the word, Mohammed Nur and several other students sent e-mails to more than 50 student groups on campus to take action. Student groups that either cosponsored or were involved with the silent rally include La Raza Student Cultural Center , Black Student Union , Al-Madinah Cultural Center and the national Council on American Islamic Relations. But only a handful students showed up to the protest, something Mohammed Nur attributes to the summer months and the last minute nature of her emails. âÄúThis is a really important issue not only for racial minorities, but anyone who could have their civil rights violated, including the elderly and the disabled,âÄù Mohammed Nur said. âÄúI think students should know about this issue.âÄù Kadija Mussa, a University biology and psychology junior, feared that if the investigation unit was eliminated, there would be no one to investigate complaints against the cityâÄôs police or other departments. âÄúPeople need to feel protected,âÄù she said. In the meantime Mohammed Nur and other students are gathering petition signatures against the proposal. They already have signatures of more than 100 students.
Cuts across departments
Eliminating the investigation unit could save the city up to $300,000, Jeremy Hanson, spokesman for Rybak said. âÄúThe governor is going to cut $30 million from Minneapolis in 2010 meaning all departments are going to have to cut their budgets,âÄù he said. Hanson added that the state is willing to take on the Minneapolis cases, as they do for the rest of the state. The stateâÄôs investigative unit has no backlog of cases, Jeff Holman, spokesman for the department said, adding that cities like Minneapolis and St. Paul âÄî which have their own investigation units âÄî perform almost the same functions as the state unit does. First Ward councilman Paul Ostrow said that doesnâÄôt make sense. âÄúItâÄôs fundamentally wrong for the people of Minneapolis to have to pay taxes to the state of Minnesota and to Minneapolis because some feel the state canâÄôt serve its function,âÄù he said. âÄúIf the city is going to have to replace functions where they believe the state is inadequate it puts incredible stress on basic services.âÄù The $300,000 is a relatively small amount in the city’s more than $350 million budget, but a large portion of the Civil Rights DepartmentâÄôs budget, Mohammed Nur said. âÄúThey only get 1 percent of the cityâÄôs entire budget, and when you cut from such a small department it hurts more,âÄù she said, adding that she sees the cut as a repeating theme of putting civil rights issues on the back burner. Michael Jordon, director of the cityâÄôs Civil Rights department, said that the city council task force is only presenting recommendations, and the mayor ultimately has the right to create a budget that balances âÄúthe needs of Minneapolis.âÄù Jordan said while he doesnâÄôt want to see the investigation unit go, it may have to happen in tough economic times. He said he also hopes the city can finish its several hundred unsolved cases if itâÄôs absorbed into the state. âÄúIn these tough economic times itâÄôs only rational that we are prudent and cut back,âÄù he said. âÄúI think people need to understand that.âÄù