The city devoted $40,000 this summer for preventing Somali youth violence. 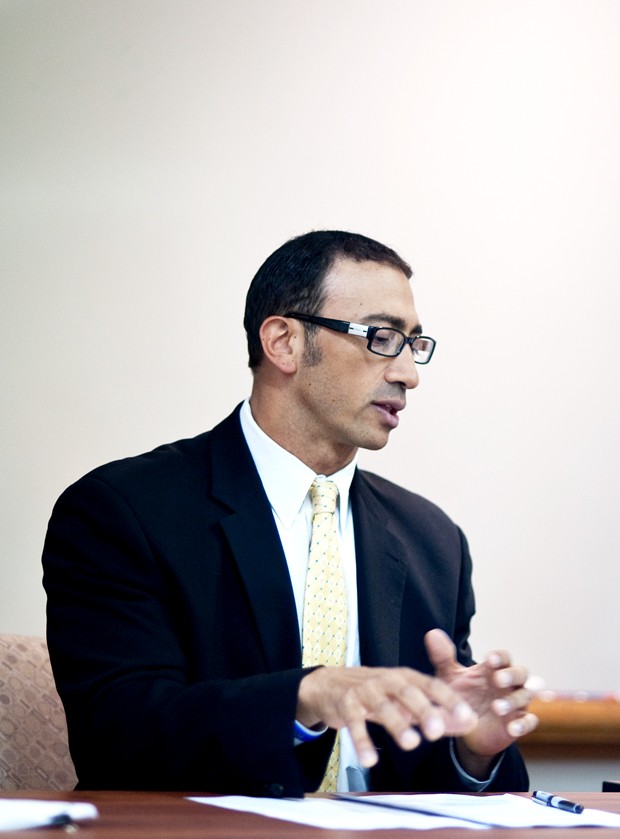 Bass Zanjani, the Youth Violence Prevention coordinator for Minneapolis, leads a meeting Thursday at the Humphrey Institute. The meeting was to discuss what to do with money from a grant for Violence Protection.

Cedar-RiversideâÄôs violent episodes in 2008 were a wake-up call for the city of Minneapolis, prompting it to set aside a one-time grant to help reduce youth violence in the neighborhood. Mayor R.T. Rybak budgeted $75,000 in early 2009 for empowering specific programs for prevention of the escalated Somali youth violence in the neighborhood âÄî $40,000 of which will be used specifically this summer, starting Aug. 1. The cityâÄôs Department of Health and Family Support gave the money to Pillsbury United Communities, which will manage the project, and the Somali Youth Neighborhood Council (SYNC), which will create outreach jobs for Somali youth to engage at-risk youth in more positive activities. Youth Violence Prevention coordinator of Minneapolis, Bass Zanjani , said the $40,000 portion of the contract will target interventions for Somali youth. âÄúThe primary objective is to hire six Somali youth workers through SYNC to reach out to at-risk and high-risk youth to divert them to community programs and away from risk behavior and gang violence and so forth,âÄù Zanjani said. Abdirizak Mahboub, executive director of the Cedar-Riverside Neighborhood Revitalization Program , said thousands of East-African immigrants use the Brian Coyle Center for educational and recreational activities, but the center is not equipped to serve this many people. âÄúWe have limited space and limited funding, therefore, we can only help limited number of youth,âÄù Mahboub said. Ben Marcy, president of the West Bank Community Coalition , agreed with Mahboub, adding that there are people from outside of the neighborhood coming in and using the center, just because itâÄôs seen as a community center. Omar Jamal, director of the Somali Justice Advocacy Center described the Brian Coyle Center as a place where gangs gather to organize violent activities. Still, other community leaders say many people hold prejudices and misconceptions about the neighborhood, because of how the media covers it. Cedar Humphrey Action for Neighborhood Collaborative Engagement (CHANCE) coordinator, Merrie Benasutti , said people have a negative perception of the neighborhood which is not accurate. âÄúOur safety issues are perceived to be much worse than they really are,âÄù Benasutti said. âÄúThe towers [Riverside Plaza ] are referred to as, âÄòcrack stacksâÄô or, âÄòghetto in the sky.âÄôâÄù Benasutti expressed concerns about the escalated level of the Somali youth violence in the neighborhood, but said there is more good than bad. Still Jamal accused the Coyle management of being too âÄúweakâÄù to keep the youth who are engaged in gang-related activities, off the streets. âÄúThe grant would not help much because there are not strong activities which could totally help the lost-boys,âÄù he said. Mahboub said the city will use the grant to focus on two groups of Somali youth: a group that is at risk for participating in criminal activities and a group that has already engaged in criminal activity. Tightening security around the Coyle Benasutti said Sherman Associates , which owns the Cider-Riverside Plaza, has provided the city with funds that will go toward hiring a police officer to patrol the area by the Brian Coyle Center, a couple of nights a week for the remainder of the summer. In addition, the Cedar-Riverside Partnership , which is made up of several institutions such as Augsburg College, Pillsbury United Communities and Fairview Health Services, banded together and developed a framework of security priorities for the Brian Coyle Center. Mahboub said the partnership combined funding to hire extra security guards for the center. âÄúItâÄôs a temporary security that will be reevaluated,âÄù Marcy said. Benasutti and Mahboub said the issues in the neighborhood threaten everybody and it will take more resources and time to address them. Mahboub said the Brain Coyle Center cannot solve all the problems facing the Somali youth. âÄúBecause Brian Coyle has a big name, everybody imagines that it will do the magic for thousands of East-African youth, but that is not true.âÄù