Another series, another Big Ten split

The Gophers have yet to sweep a conference foe this season and are 5-7 in the Big Ten after a win and loss against Purdue. 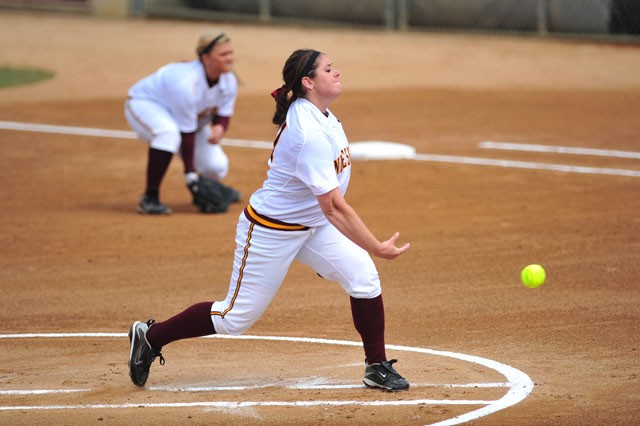 Sometimes, a steady diet of wins doesnâÄôt necessarily end with a full stomach. For the fourth time in 11 days, the Gophers softball team won the first game of a Big Ten series before dropping the second. This time it was Purdue who forced the split in the second game, beating Minnesota 3-2, after the Gophers won the first game by the same score. Although theyâÄôve beaten five of the six conference opponents theyâÄôve played this year âÄî swept only by Ohio State âÄî the Gophers are stuck with a 5-7 Big Ten record and sit in a tie with Penn State for sixth place. âÄúWhen you look at the fact that this team had two conference wins last year, I donâÄôt think itâÄôs frustrating to have a 5-7 record at all,âÄù head coach Jessica Allister said. âÄúInstead of looking at it as another series where we win the first one and drop the second, I think itâÄôs another series where we took a game from a very strong team.âÄù The same isnâÄôt necessarily true for the players. Senior Malisa Barnes âÄî who went 4-for-6 on the weekend âÄî is a bit irritated with the trend. âÄúItâÄôs very frustrating,âÄù she said the day after the Purdue games. âÄúWeâÄôre beating ourselves. WeâÄôre not being outplayed.âÄù Minnesota was able to take the first game from Purdue after capturing a 3-2 lead in the seventh inning on a two-run homer by senior Natalie Neal. It was NealâÄôs fifth career home run and first since 2009. âÄúIt was a great feeling,âÄù Neal said, âÄúa fist-pumping feeling.âÄù Freshman Sara Moulton allowed two unearned runs in her 24th win of the season, which was good for a share of the Big Ten lead. While her four strikeouts were below her season average, she walked just two batters. The second game was a disappointing one for Minnesota. The Gophers erased a two-run first inning deficit only to give it up in the bottom of the sixth. PurdueâÄôs Ashley Courtney hit a game-winning RBI double that drove in Aimee Gingsrich, who reached on a walk to start the inning. The Gophers werenâÄôt able to score in the top of the seventh and dropped a one-run game for just the second time since March 17. Part of the reason for the inconsistency may be the teamâÄôs recent defensive troubles. Minnesota has committed seven errors in its last three games and have at least one in six of the last eight contests. âÄúItâÄôs just a matter of quick plays getting away from us,âÄù Barnes said. ItâÄôs an odd trend considering the team committed one or zero errors in the 18 games before the recent woes. Allister doesnâÄôt think her team is too far away from regaining their early-season form, saying that the miscues are âÄúdefinitely not a lack of concentration.âÄù The Gophers have proven that they can play with every Big Ten team theyâÄôve faced so far. But to climb at all in the standings, theyâÄôll have to be able to limit the miscues. Barnes put it a bit more bluntly. âÄúIf we take our physical mistakes out of the equation, these teams donâÄôt beat us,âÄù she said.