The Gophers found the net once, after an early barrage of goals gave the Wolverines the lead. 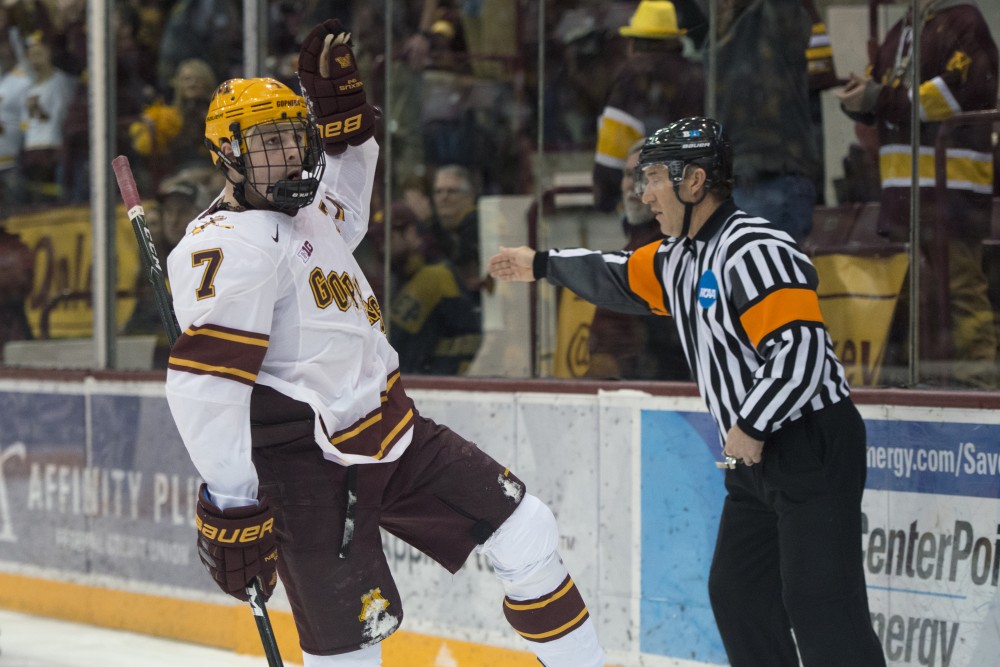 Freshman forward Brannon McManus celebrates after scoring his goal late in the third period against Michigan on Friday.

Gophers players said after Friday’s loss that they would need a jolt of energy to turn the weekend around and beat the Wolverines Saturday.

The team held a players-only meeting to ensure they saw a change before the next game.

“Tonight they got two quick ones,” captain Tyler Sheehy said. “We put ourselves in a hole like that, and it’s hard to come back.”

Like Friday, Saturday began with the Gophers going down early.

The first goal for Michigan came on its first shot of the game. The Wolverines padded their lead with another goal 3:06 into the game. Before the Gophers settled in, they found themselves down 2-0.

“As the game progressed, sometimes we got in our own way,” head coach Don Lucia said. “The harder you try, the worse it gets. Then you start to become individualistic, and you don’t share the puck and make the right play because you’re trying too hard.”

Lucia said many of the Gophers problems would be solved if the usual offensive talent provided the scoring. It was forward Darian Romanko who scored the lone goal Saturday, just his third of the season.

Minnesota’s offense is tied for 41st in college hockey. The team has not scored goals to send games into overtime or comeback.

“Guys aren’t having the years that they want,” Sheehy said. “It’s a team effort every night, we’ve just got to come together these next 10 games and then [in the] postseason we’ve got to be great.”

The team couldn’t find enough offense to come within reach, and by the time four minutes had passed in the first period, Michigan had scored the eventual game-winning goal.

The Wolverines offense got scoring from the top-two lines, with a goal each coming from forwards Brendan Warren, Josh Norris and Cooper Marody.

The message after Friday’s loss was that players, especially veterans on the team, needed a better start from the first drop of the puck, but the message Saturday was to get the team on the same page for the last 10 games of the season.

“What we’re doing right now isn’t working and we know that,” Romanko said. “We’ve got to get everyone on the same page and just buy into the system.”