The Gophers are out of the field for the first time since 2000. 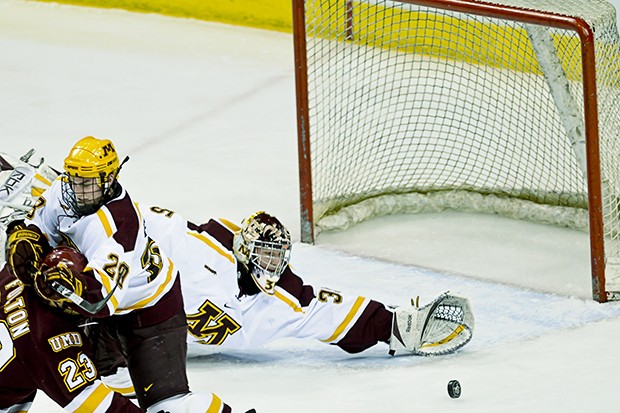 For the first time since 2000, the Minnesota menâÄôs hockey team will watch the NCAA tournament as spectators. A 2-1 loss in ThursdayâÄôs Western Collegiate Hockey Association Final Five play-in game with Minnesota-Duluth knocked the Gophers out of contention for the national tournament and ended the teamâÄôs streak of 8-consecutive appearances âÄì the second longest in the country behind MichiganâÄôs 19. The Wolverines also matched MinnesotaâÄôs record of 32 overall appearances by earning an at-large bid this year. The Gophers, along with Wisconsin, were edged out of a three-way tie by Ohio State for the final spot in the 16-team field. A win over the Bulldogs would potentially have pushed Minnesota into contention, but a hot weekend by Alex Stalock and MacGregor Sharp carried Minnesota-Duluth into the national tournament. After becoming the first team to win the Final Five after playing in the quarterfinal game, the Bulldogs will be one of four teams to play in Mariucci Arena next weekend for the Western regional. Minnesota-Duluth will face Princeton next weekend on Friday at 8 p.m. while Denver, who dropped SaturdayâÄôs championship game 4-0 to the Bulldogs, will play Miami at 4 p.m. WCHA regular season champion North Dakota was the only other conference team to make the tournament.

Play-in recap
In the Western Collegiate Hockey Association Final Five play-in game, Minnesota-Duluth was able to accomplish what they hadnâÄôt been able to do in the regular season âÄì beat Minnesota. Behind a 39-save performance from Alex Stalock, the Bulldogs cruised into the semifinals with a 2-1 win Thursday night in front of 17,611 fans. MacGregor Sharp scored 3:26 into the game when Alex Kangas coughed up a rebound to the senior in front of the net. After the second period, Kangas, who had been suffering from the flu all week, was pulled in favor of a healthy Kent Patterson. Kangas finished the game with nine saves on ten shots. Patterson, whose only collegiate start came in a 2-2 overtime time with the Bulldogs on Feb. 27, had similar struggles in relief. The freshman gave up one goal in the second period when Matt Greer knocked in a rebound to take a two-goal lead. He ended his two periods with 19 saves. Meanwhile, Stalock and the Minnesota-Duluth defense kept four men back in the defensive zone and used the small ice sheet to limit the Gophers offense. âÄúWe needed to adjust our game tonight, and it took us a little too long to do that,âÄù Gophers captain Ryan Stoa said despite his teamâÄôs 40 shots on goal. Stalock showed why he was this yearâÄôs WCHA Goaltending Champion by stopping all but one of those shots. âÄúOur best player was our best player,âÄù Bulldogs coach Scott Sandelin said of the junior from South St. Paul. And when he wasnâÄôt on, Stalock was either lucky or was saved by good defense. Mike Hoeffel was taken down during a first period breakaway and Nico Sacchetti missed an open net in the third that would have tied it the game at 2-2. âÄúWe didnâÄôt have a lot of guys have great games,âÄù Lucia said after MinnesotaâÄôs perfect 4-0 record in the Thursday play-in game came to an end. The one time StalockâÄôs luck ran short came when Cade Fairchild blasted a shot from the point that bounced off a Bulldogs defenseman and into the net early in the third period. But by then Minnesota-Duluth held enough of an advantage to hold on and advance to face North Dakota and eventually move on to beat Denver 4-0 in the WCHA finals.