The Gophers host Penn State and Ohio State — two teams that swept them a month ago. 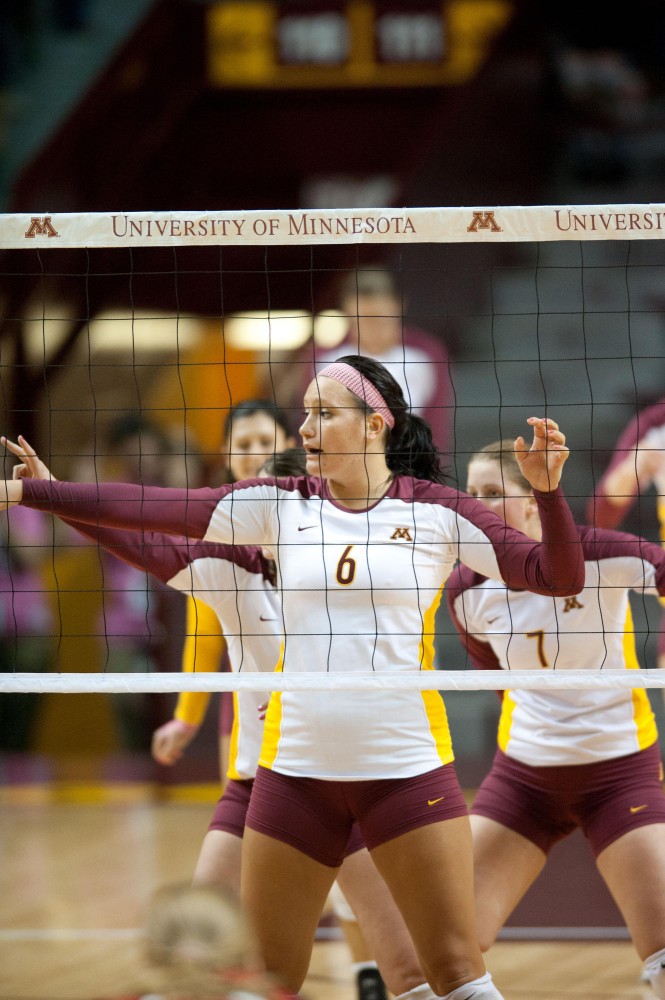 Much has changed for the Gophers volleyball team since it lost to Penn State and Ohio State a month ago.

Then, Minnesota was 1-3 in the Big Ten with a difficult road schedule on the horizon.

Now, the No. 15 Gophers are 6-6 heading into a stretch of six of eight home matches, and brimming with confidence after last weekendâÄôs straight-set upset at No. 3 Illinois.

WhatâÄôs happened in the middle is a roller coaster of dramatic wins, unexpected losses and everything in between.

The Gophers (13-8 overall) will attempt to steady the ship this weekend at the Sports Pavilion, where they play the No. 6 Nittany Lions on Friday and the No. 22 Buckeyes on Saturday.

Penn State (17-5, 10-2 Big Ten) has also struggled with its consistency. But the Nittany Lions have rallied of late, winning six consecutive matches, including a four-set victory last Saturday over then-No. 1 Nebraska.

âÄúWe knew that they would hit their stride at this time,âÄù Bush said. âÄúTheyâÄôre starting to play like a unified team in how they move from offense to defense. TheyâÄôre a lot smoother than what they were earlier in the season, and theyâÄôre a lot more formidable in the attack.âÄù

The Gophers failed to register an ace in that match, but have improved their serving in recent matches.

Gophers sophomore Tori Dixon, who ranks sixth in the Big Ten with 0.34 aces per set, said the team is in a better frame of mind than it was in the Oct. 1 loss.

âÄúI feel like last time we were in a funk. It just felt weird on the court,âÄù Dixon said.

âÄúIt is different playing at home,âÄù she added. Minnesota is 4-1 at the Sports Pavilion in 2011. âÄúOur fan support is great, and they always get really into it. It definitely does take a toll on teams.âÄù

Both Dixon and senior libero Jessica Granquist acknowledged that playing Penn State, the four-time defending national champions, is as much of a mental game as it is physical.

âÄúI really think that any game in the Big Ten could be won or lost based upon the mindset going in, not solely based on performance,âÄù Granquist said. âÄúI think that if you stay consistent and donâÄôt let the lows or highs get you too much, anyone can [win].âÄù

One mental advantage the Gophers have is the outcome of their last match against the Nittany Lions at the Sports Pavilion.

âÄúIt is a good comfortable zone to have âÄî a good thing to have in your repertoire,âÄù Granquist said about last yearâÄôs win. âÄúBut I canâÄôt really hold onto it too tightly.âÄù

Both teams sport different looks than in 2010, most notably at the setter position.

While Hancock has set the Nittany LionsâÄô offense since their first match in August, Gophers freshman Kellie McNeil has had to wait her turn.

Bush hasnâÄôt named McNeil the starter against Penn State, but she did laud the freshman for her consistency during a road weekend that was largely inconsistent.

McNeilâÄôs play impressed Dixon as well, who struggled against Northwestern but played one of her best matches of the season against Illinois.

âÄúShe did bring a lot of things to us,âÄù Dixon said. âÄúHer block was huge âÄî she can jump like no other person IâÄôve seen before. I think that will help us this weekend, but whatever the coaches decide to do, itâÄôs all for the best.âÄù

In previous weekends, Bush has stuck by one setter for both matches. She has not said if FridayâÄôs match will affect the decision on who to start against Ohio State.

Ohio State had six service aces in that match, and although it has cooled down since then, it remains one of the most aggressive serving teams in the Big Ten.