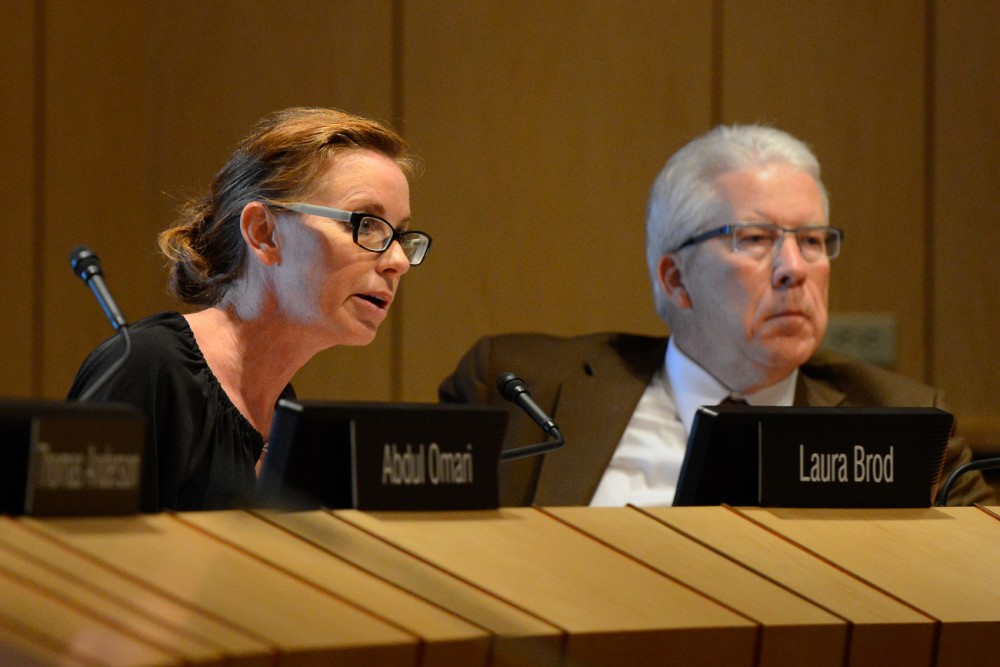 University of Minnesota Regent Laura Brod speaks about a proposal put forth by regent Michael Hsu regarding the salaries of high paid falculty during the board of regents meeting in the Mcnamara Alumni Center on Thursday morning.

During its meeting Friday, the University of Minnesota’s Board of Regents voted to approve renovations to its academic health center and discussed changes to the Athletics Department, among other topics.

The school will also consider changes to its recruiting program.

He added the department will consider training host athletes with strict and clear expectations for high school recruits when they come to campus and update its training for current athletes.

While some regents praised Coyle for his commitment to sexual assault education in athletics, others said there is much more work to be done.

“I want to make sure it doesn’t come off as all sunshine and roses with this topic,” said Regent Darrin Rosha. “We’ve had these kinds of programs in the past. What are we going to be doing differently?”

“There’s a difference between hearing and listening,” she said. “If you’re just checking the box, you won’t be changing the culture.”

Coyle said student-athletes get about four hours of training annually on elements of the student conduct code, like sexual harassment and assault, hazing and academic dishonesty.

Restructuring of Government and Community Relations

The board voted to appoint former president and CEO of the St. Paul Area Chamber of Commerce Matt Kramer as vice president for University and government relations — a newly-formed position.

Along with Kramer’s appointment, the board voted to restructure University relations, combining lobbying, public relations, marketing and community relations under Kramer’s leadership.

The board voted unanimously to fund a $13.5 million project to renovate space in the Phillips Wangensteen Building, Moos Tower and 717 Delaware to make room for programming formerly housed in the VFW Cancer Research Center and Masonic Memorial Buildings on the East Bank campus.

Those buildings — designated as “do not invest” by University administration — will be mothballed and demolished once programming is moved to the renovated spaces.

They currently house clinical and research operations like the Schulze Diabetes Research program as well as cancer diagnosis and prevention programs.

“These are signature programs … they need a good home,” said Regent David McMillan, chair of the Facilities, Planning and Operations Committee.

After over three months of debate, regents voted Friday to relocate the displaced recreational sports bubble to the site of the Electric Steel Elevators near TCF Bank Stadium.

The bubble will be displaced with the construction of new track and field facilities as part of the Athletes Village project.

Regents debated alternative locations for the bubble after a group of preservationists sued the University in an attempt to halt demolition by claiming they are historic.

While the restraining order to halt demolition was not granted, attorney for the Friends of the Electric Steel Elevators Erik Hansen said the group pressed the matter in Hennepin County District Court.

“The University has made it clear that they’re not interested in cutting any kind of deal on this,” Hansen said.

University attorney Dan Herber said both the group and the University filed for summary motion at the end of January, asking the court to make a decision on whether demolition should be halted.

He said the court has until April to decide, but the University can demolish in the interim.

The cost of demolishing the elevators stands at just over $3 million. It will cost the University $6 million to relocate the recreational sports bubble and roughly $13 million for the track and field facility.