Gophers volleyball closes out regular season with pair of wins

Minnesota finishes the regular season with a 23-5 record. 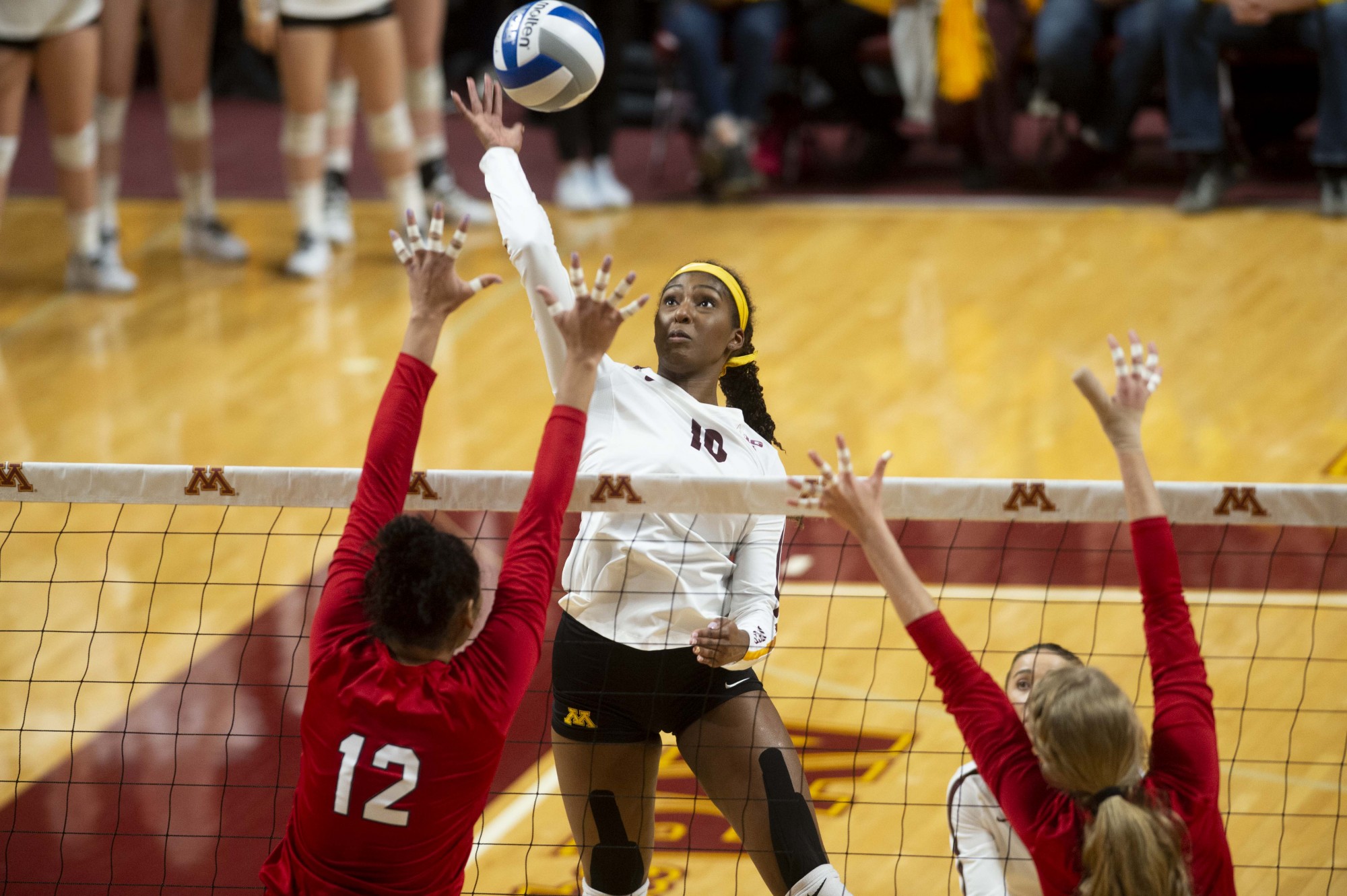 Opposite Hitter Stephanie Samedy jumps to spike the ball at the Maturi Pavilion on Friday, Nov. 22. The Gophers took Nebraska to five sets but ultimately fell 3-2.

The Gophers volleyball team swept Rutgers Friday behind their dominant performance from the service line.

The Gophers won: 25-14, 25-15 and 25-22 after getting off to a quick start. Minnesota opened the first set 12-6 after outside hitter Airi Miyabe landed the Gophers second ace of the set. The Gophers extended their lead after middle blocker Regan Pittman dropped three aces in a row, giving Minnesota a 19-11 advantage. A kill from outside hitter Adanna Rollins got the Gophers to set point before a Rutgers error gave Minnesota the 1-0 lead.

Minnesota’s dominance from the service line continued in the second. Libero C.C. McGraw added another ace to bring the Gophers within one and Minnesota began to pull away. A Rollins kill put the Gophers up 10-6 and Pittman again landed three aces in a row, giving Minnesota a 21-13 advantage. Her six aces led the Gophers on a night they had a season-high 15. The final point of the set was fitting, as setter Kylie Miller closed the second with yet another ace.

Rutgers forced Minnesota to grind out the third, coming within one as Minnesota led 12-11. But Miyabe added a flurry of kills for Minnesota, one putting them back on top 15-11. Miyabe added another dose of kills late, the last giving Minnesota a narrow 23-22 lead before the Gophers added the last two, getting the sweep and opening their final regular season weekend off with a win. Miyabe had eight kills in the third on the way to her team-high 13.

In their last match of the regular season, the Gophers upset No. 7 Penn State, beating them in University Park for the first time since 2004.

The Gophers dropped the first before winning three consecutive sets: 19-25, 25-20, 25-20 and 25-23. Minnesota opened the first set with an early lead before PSU stormed back and took a four-point advantage. The Gophers cut the lead back down to three multiple times, but Penn State pulled away late, taking a 1-0 lead over Minnesota.

Penn State built on that momentum early in the second. They opened the set 14-9, giving Minnesota all they could handle. Slowly the Gophers came back, tying the set at 16 off an ace from defensive specialist Rachel Kilkelly. Kilkelly added another ace to give the Gophers an 18-16 advantage. One night removed from its season-high 15 aces, Minnesota recorded five more, stringing together two excellent matches from the service line. The Nittany Lions tied it back up at 18, but opposite hitter Stephanie Samedy landed three kills in a row to put Minnesota back up 21-18. She added another to get the Gophers their 23rd point and two Penn State errors closed out the set, tying the match at 1-1.

Similar to the second set, PSU built another early lead in the third, opening the set 8-3. But Samedy continued to be a force for the Gophers. She added another flurry of kills as the Gophers cut the Penn State lead to one, 11-10. Middle blocker Taylor Morgan tied the set at 16 with a kill and Minnesota pulled away. Samedy added another pair of kills and an ace as the Gophers closed out the third, taking the 2-1 lead.

After winning consecutive sets, the Gophers were rolling, opening the fourth 14-9. The Nittany Lions crept back, going on a 3-0 run that cut the Minnesota lead to two before tying the set at 19. Minnesota and Penn State traded points until Samedy’s kill gave the Gophers match point and Pittman and outside hitter Alexis Hart stuffed the last Penn State attempt. Samedy finished the match with a 21 kill double-double.

“That was probably the biggest difference for us, being able to get [Samedy] back into a rhythm, front row and back row,” head coach Hugh McCutcheon said. “She had a ton of range and obviously really big numbers, so that was great.”

The Gophers are finally at full strength as they approach the playoffs, and the win at Penn State proved how scary of a team they can be moving forward.

“Having everyone be back in there and getting chances to find that gel again, I think that’ll definitely help a lot,” Samedy said.