Cashman is the first Gophers linebacker taken in the NFL draft since De'Vondre Campbell in 2016. 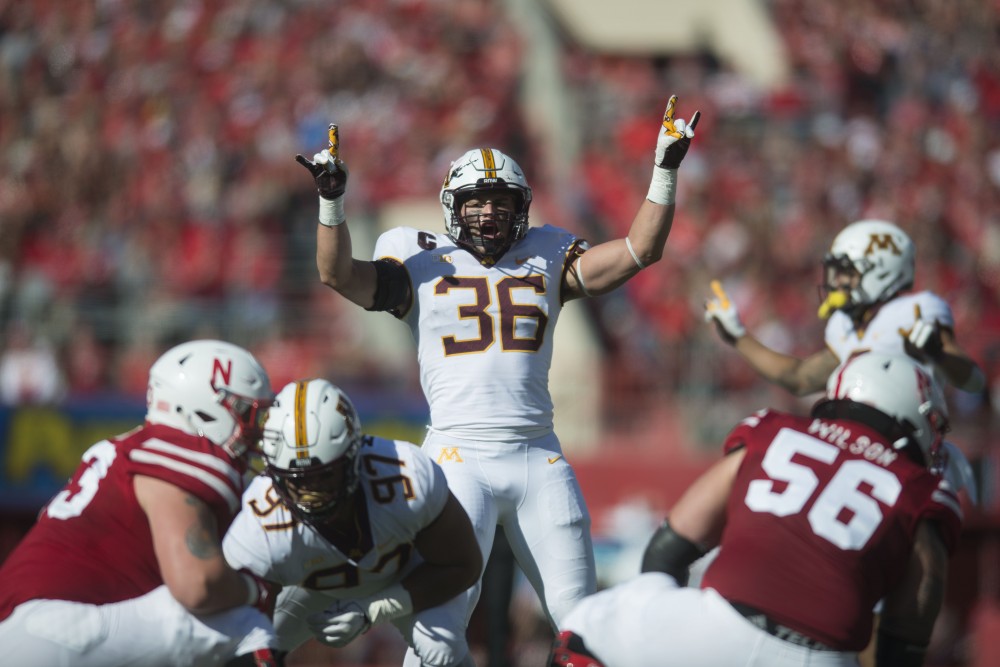 Linebacker Blake Cashman calls to his teammates on Saturday, Oct. 20 at Memorial Stadium. Nebraska defeated the Gophers with a final score of 53-28.

Minnesota had a presence in the 2019 NFL draft with a former linebacker heading out east.

Gophers’ linebacker Blake Cashman was drafted by the New York Jets in the fifth round of the 2019 NFL draft on Friday in Nashville, Tennessee.

“When you get the call, you’re just overwhelmed with so many different emotions, and it’s kind of hard to put into words what you’re feeling,” Cashman said. “It was a great feeling, and something I’ve worked for my entire life.”

With the Jets’ selection of Cashman at the 157th overall pick, he became the first player taken in the NFL draft from the University of Minnesota since 2017, when the Jacksonville Jaguars selected defensive back Jalen Myrick in the seventh round.

Cashman started his career with the Gophers as a walk-on in 2015 before turning heads his senior season with a team-leading 104 tackles on the weak side.

“I want to continue to carry that same approach that I had when I decided to walk on at Minnesota,” Cashman said.  “And that’s just really understanding where you’re at as a player and what you need to improve on.”

He skipped the Gophers’ bowl game against Georgia Tech to prepare himself for the NFL Draft. At the NFL Combine, the 6-foot-1, 237-pound linebacker from Eden Prairie, Minnesota ran the 40-yard dash in 4.50 seconds to put himself near the top of the group.

Cashman, who will head to New York at the end of the week, was the only player selected in the draft out of Minnesota. Offensive tackle Donnell Greene, kicker Emmit Carpenter and defensive lineman Gary Moore all are heading to NFL teams in free agency.

Cashman, who will graduate with a marketing degree in May, said one of his favorite moments was taking the field when then-No. 2 TCU came to TCF Bank Stadium. It was the first game of the season, and a full house of 54,147 people were in attendance. “They had the jets flying over, the fireworks going. In that moment it was just so surreal that I was taking the field for the first time,” Cashman said.

“I’ve grown so much, not only as a football player, but just in every aspect of my life,” Cashman said of his college experience. “I’m always going to be a life-long supporter of the Gopher football team and this University.”