The men won 13-of-16 events but the women topped them by winning 14; both teams cruised past Missouri. 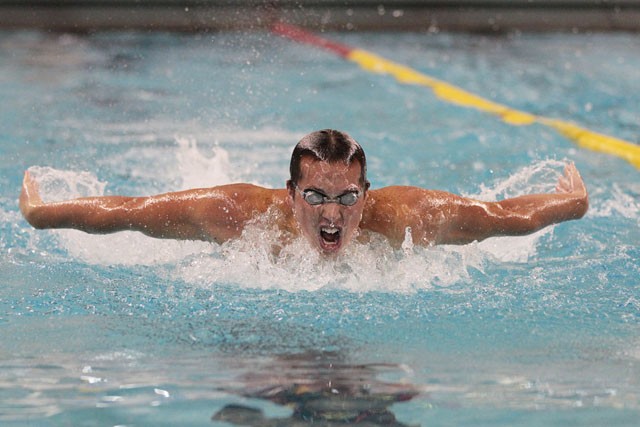 Freshman Kyler Van Swol swims the men’s 200 butterfly against the University of Missouri on Saturday at the Aquatic Center. Van Swol took gold in both the 200 backstroke and the 100 butterfly.

The Gophers menâÄôs swimming and diving team was back in action on Saturday for the first time since its training session and meet against Hawaii on Dec. 30, and head coach Dennis Dale wasnâÄôt exactly impressed with what he saw.

âÄúI think we were a little tired coming off the training trip. We werenâÄôt as sharp as I would have liked us to be,âÄù Dale said. The fatigue, however, didnâÄôt stop the menâÄôs team from routing Missouri. Minnesota won 13-of-16 events en route to defeating the Tigers 189-109. The victory improved MinnesotaâÄôs record to 4-1 in dual meets.

Senior Chris Peterson edged Benecki in the 500, finishing in 4:38.07, to BeneckiâÄôs 4:38.18. Senior All-American Michael Richards, fresh off being named Big Ten Swimmer of the Week, won both the 50- and 100-yard freestyle events.

Richards, the school record holder in the 50-yard freestyle, won the event with a time of 20.25, and won the 100 in 45.59 seconds. In addition to his individual success, Richards also anchored both relay teams to victories on Saturday. He teamed with Nadav Kochavi, Ivan Kutesa and Kevin Baseheart to win the 200 medley relay in 1:30.53. Richards and Baseheart teamed with Curt Carlson and Zach Bolin to win the 200 freestyle relay in 1:22.49.

The Gophers womenâÄôs team took 14-of-16 events to defeat Missouri just as comfortably as the men, 196-101. Senior Kaylee Jamison won both the 50-yard freestyle and 100-yard butterfly with times of 23.54 and 55.19 respectively. She also was part of the victorious 200 medley and freestyle relays. All-American Ashley Steenvoorden had a big day, winning both the 200- and 500-yard freestyle races.

The victory over Missouri improved the Gophers women to 6-1 in dual meets.