No. 10 Minnesota loses to No. 2 Oregon in NCAA Tournament 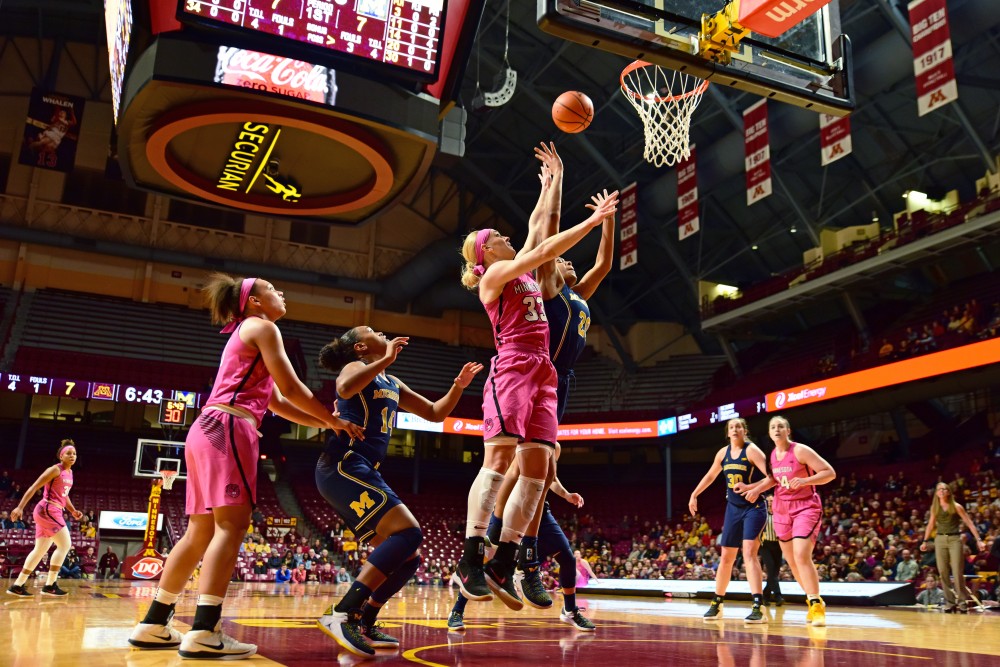 Gophers guard Carlie Wagner goes up for a shot during Minnesota's game against Michigan on Wednesday, Feb. 14. at Williams Arena.

As the game between Oregon and Minnesota progressed, the Gophers saw their hopes of an upset and deep tournament run disappear.

No. 10 Minnesota lost 101-73 to No. 2 Oregon in the second round of the NCAA Tournament at the Matthew Knight Arena, the Ducks’ home court, Sunday night.

“Obviously a tough moment for our team, but I am really proud of them,” head coach Marlene Stollings told reporters. “Oregon is a tremendous team, I will be shocked if they are not playing in the Final Four and going for a championship.”

The Gophers could not stop the Ducks’ offensive attack. Oregon (32-4) shot 61 percent from the field, compared to Minnesota’s 42 percent.  The Ducks also out-rebounded the Gophers 42-21.

The Gophers (24-9) struggled in the second half on both offense and defense. Minnesota allowed 31 in the third quarter alone. During the second half, the Gophers put up only 37 points compared to the Duck’s 50.

“Ball movement is always very difficult to guard, especially when teams are really back and forth and have multiple shooters out there at the same time,” guard Carlie Wagner told reporters. “It really causes problems out there.”

Wagner led the team in points, scoring 20 and shooting 7-15 from the field. Wagner finished her final season as a first-team All-Big Ten honoree. She ranks third in the program’s history for career scoring.

The game was back and forth through the first quarter. The Gophers headed into the second trailing 30-22. Minnesota was down 41-36 before the Ducks rattled off a 16-0 scoring run that started in the second quarter and ended in the third.

Oregon guard Sabrina Ionescu shoot 8-11 and put up 22 points alone in the first half, which included a buzzer-beater shot from beyond the arc to end the second quarter. In the process of shooting, Ionescu was fouled on her shot. She finished the game with 29 points and nine assists, shooting 10-14.

Three seniors — center Jessie Edwards, center Bryanna Fernstrom and Wagner — all graduate. However, Minnesota returns its leading scorer in Kenisha Bell and the Big Ten Freshman of the Year, Destiny Pitts.Bell scored 14 points in the game, while Pitts finished with 17 points.

Minnesota made the NCAA Tournament this season for the first time since 2015. The Gophers upset No. 7 Green Bay 89-77 in their first round game.

“I’ve learned that you just have to keep fighting,” Pitts told reporters. “[Wagner] and the seniors have taught us a lot.”