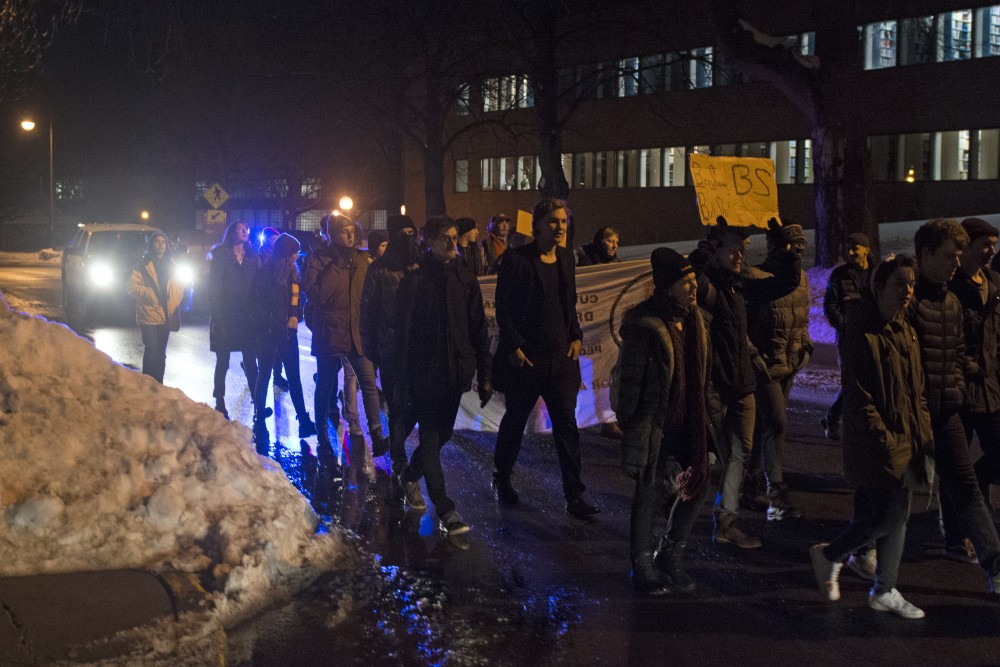 Protesters march in the streets around the St.Paul Student Center in opposition to conservative commentator Ben Shapiro's appearance on campus out on Monday, Feb. 26.

“This issue is so much bigger than Ben Shapiro … we must be prepared to fight against every aspect of hate speech at this University,” University freshman Olivia Crull said to the crowd of demonstrators.

The protest comes amid widespread criticism from lawmakers, media and conservative student groups toward the University for its decision to host Shapiro at the North Star Ballroom in the St. Paul Student Center.

University President Eric Kaler and other administrators have stated that safety concerns were the main factor behind the decision to host Shapiro in St. Paul. Shapiro’s speeches have drawn large protests at other colleges like the University of California, Berkeley, costing the school roughly $600,000 for security, according to The New York Times. Protesters gathered nearly 40 minutes before Shapiro’s speech to voice their dissent, shouting chants like “racist speakers have to go.”

University freshman Jack Dockendorf said he was there to protest Shapiro because of his views of marginalized communities.

“I’m here in solidarity with the trans community who Ben has consistently said has a mental illness,” Dockendorf said.

Jackson Bianchi of SDS said his group was there to protest the use of student service fees for Shapiro’s speech, and defend those “threatened by Shapiro’s message.”

Hundreds of students trickled into the North Star Ballroom before the event — where police officers stood at every corner of the room — each interested in hearing Shapiro’s views on current issues. University freshman Lewis Mansfield sported a “Make America Great Again” hat at the event, and said he was excited to hear Shapiro’s thoughts on gun control and the recent school shooting in Parkland, Florida.

But Mansfield said he disagreed with Shapiro on some issues, like his criticisms of President Donald Trump.

Spencer Brown, spokesman for Young America’s Foundation, said the venue’s capacity maxed out at 400 people, and added that there was an additional 500 people on the waitlist.

“So we definitely could have filled a venue like Willey Hall,” Brown said.