I’ve got love on my mind 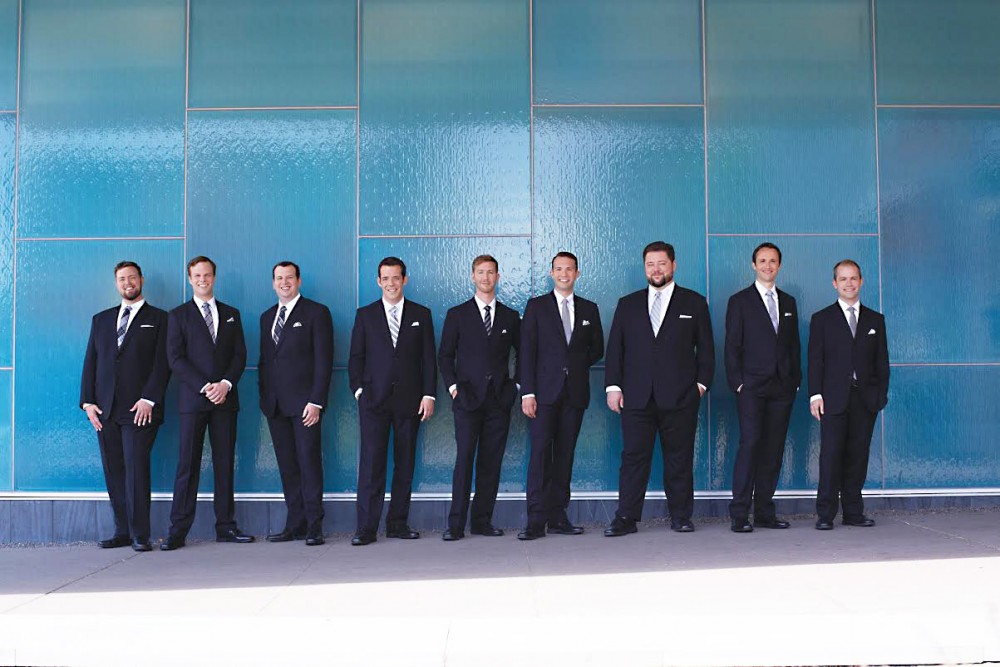 Cantus bring their latest show, "The Four Loves," to the remodeled Ordway Concert Hall this Saturday

Grant Tillery
Countless thinkers, creatives and dreamers have attempted to pin down the word “love” to no avail because its true meaning is broad and diverse. While local men’s vocal ensemble Cantus doesn’t aim to define the word with their latest concert, “The Four Loves,” they make classic conceptions of the word relevant through their artful, heartfelt arrangements.
“We’re looking to give voice to human experience, so we look for stories that are relatable to people, not just our typical, stuffy, classical-music audience,” Cantus tenor and Access Project Coordinator Zachary Colby said. “It’s easy for nine dudes to get up and sing love songs — we could sing Tom Jones until we’re blue in the face.”
Saturday’s program at the renovated Ordway Concert Hall in St. Paul marks the fourth of five stops on the local leg of the show’s tour. The set is a swooping journey through the four conceptions of love viewed through the classic Greek lens — eros (romantic love), agape (unconditional godly love), philia (platonic love) and storge (familial love).
“The programming process for this show started several years ago — we program a couple years out,” Cantus baritone, Artistic Council and Tour Manager Matthew Goinz, said. “Love has been so deeply mined by arts throughout the centuries, so we wanted to do a show about love, but we didn’t know where to turn. Someone stumbled across this ‘four loves’ concept online, and it developed from there.”
The songs range from the humorous (Malcolm Daglish’s “Little Potato”) to the solemn (Joseph Gregorio’s “To My Brother”) and introspective (Kurt Elling’s “Those Clouds Are Heavy, You Dig?”), and include four pieces commissioned with “The Four Loves” in mind. While many of the pieces feature poetic structures and dissonant chords, the nonet tackles each challenge with ease and hits the mark on every single piece, even where things are supposed to be a little off.
“With the ‘four loves’ idea, we were able to home in on songs with a very specific narrative and theme that we wanted to put forward,” Goinz said. “The ability to commission four pieces was quite extraordinary — we usually only commission one a year, and we had a very successful Kickstarter campaign and were able to get four composers.”
Most of the commissions are meditations on the word and idea of love, rather than straightforward declarations of ardor. The exception to this rule, and most whimsical of the bunch, is David Lang’s “Manifesto,” a song sung in three parts. “Manifesto” addresses the subject of romantic love head-on, tackling common desires rather than metaphors.
“What [David Lang] actually did was use Google autocomplete; he typed in ‘I want to be with someone who,’ and then everything else that popped up makes up the entire song,” Cantus Bass and Artistic Council Chris Foss said. “He removed some of the popular ones that were less audience appropriate — as you can imagine, it’s the Internet.”
Cantus’ four commissions diverge wildly in their portrayals of love. Ysaye Barnwell’s (formerly of Sweet Honey in the Rock) “Tango With God” is a sensuous yet spiritual homage to religion. Gregorio’s “To My Brother” is set to the words of a poem written by James Clementi, whose brother Tyler’s suicide was national news. Roger Treece’s
“Philia” looks at love from a classic, pure lens, where intimacy trumps the all-encompassing notion of romance.
These various perspectives are important to Cantus, since they’re a homogenous group.
“I think it’s important to include perspective from outside,” Colby said. “We are nine white men singing; we can’t change that at this point, so it’s important we find voices that represent different stories and lives outside of Minnesota.”
With focus on the various types of love, Cantus’ program engages listeners in a way traditional choral ensembles fail to do. The themes flow together and aren’t all concentrated in one segment, making the show a love rollercoaster.
“You’re not just going there and hearing [Beethoven’s Ninth Symphony] and letting it wash over you,” Colby said of Cantus concerts. “It’s not programmatic music where you can decide what you’re feeling, but really sharing with you a message and you can digest and enjoy [it].”
Delete Image
Align Left
Align Center
Align Right
Align Left
Align Center
Delete Heading