Duran finished second in the all-around in Minnesota's meet against Illinois on Feb. 10. 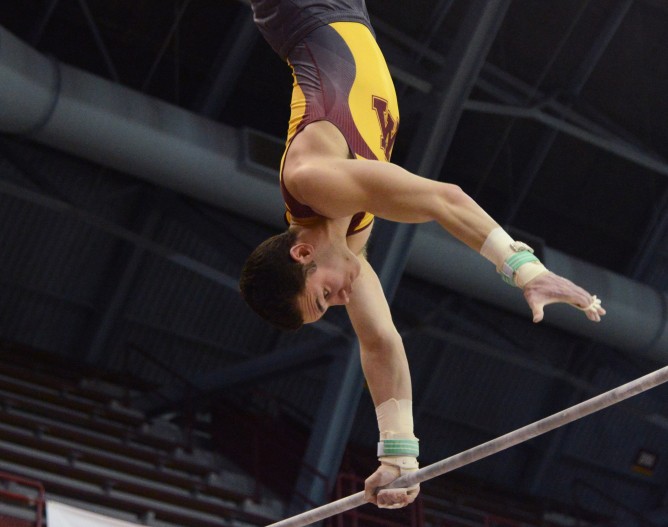 Senior Tristan Duran competes on the high bar during a meet on March 25, 2017 at Maturi Pavilion.

One day, while playing soccer, Tristan Duran’s parents noticed that he was doing cartwheels and backflips on the field instead of trying to make saves.

Duran said his aunt told his parents to enroll him in a gymnastics school.

“I started gymnastics a bit later than everyone else,” Duran said. “As I grew in the sport, watching the Olympics made me want to continue. It helped [that] my parents pushed me in the sport as well.”

Duran suffered a shoulder injury last summer and he needed to have surgery. He chose not to, though, so he could compete at the 2017 University Games in Taiwan.

“I knew [the shoulder injury] was bad. Competing there was one of the hardest things I’ve ever had to do,” Duran said. “After I left the meet, I couldn’t lift my arm above my head. It required a lot of rest after that.”

Head coach Mike Burns said Duran is a person of integrity and fits perfectly into the team.

“If you can get guys to come in that have those traits, they fit right in with what we’re trying to do here. His easygoing nature helps out,” Burns said.

Before coming to Minnesota, Duran was the New Jersey state gymnastics all-around champion in 2011, 2012 and 2014. He finished second in the all-around and first in parallel bars at the 2014 USA Gymnastics Junior Olympics Championships.

Burns said he saw a lot of potential in Duran when Duran was in high school. He said Duran chose Minnesota a few days after he visited on his recruiting trip.

“He’s been a great guy for us since he’s been here,” Burns said. “It was a good decision on our part to bring him in.”