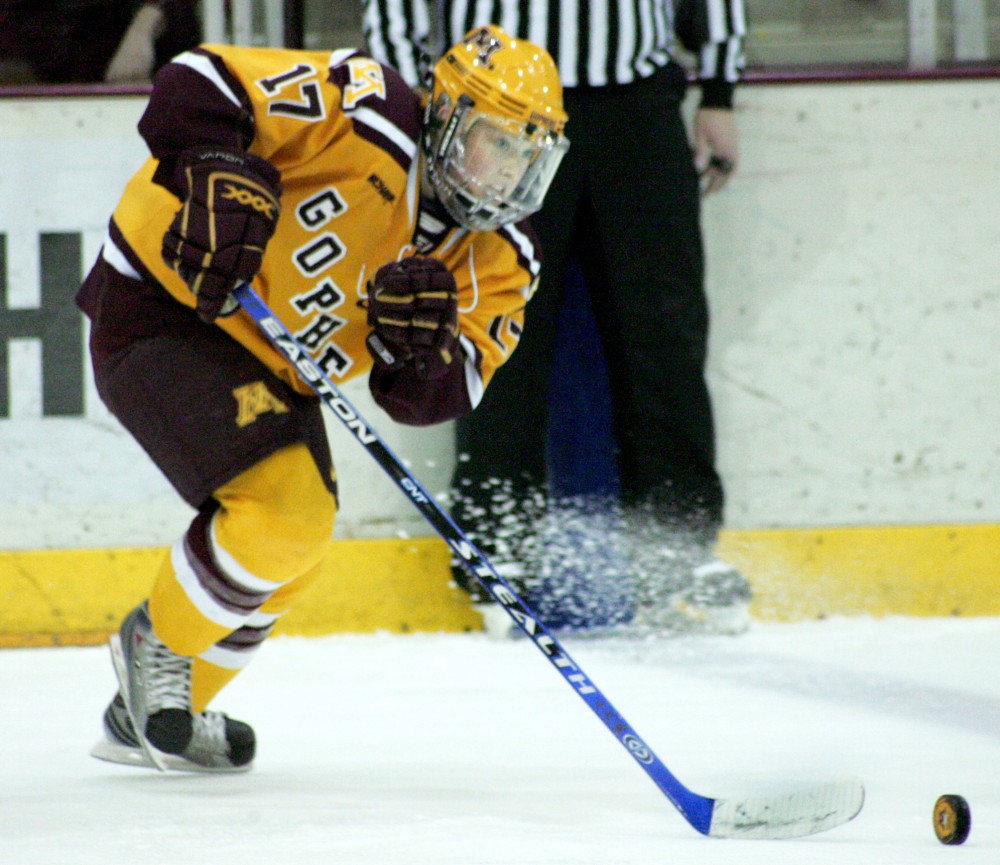 Even though the Minnesota womenâÄôs hockey team moved up in the national rankings, it isnâÄôt something the team pays attention to. The Gophers (2-0-0 Western Collegiate Hockey Association, 3-1-0 overal l) have taken over the second spot on the U.S. College Hockey Online poll with Wisconsin at the top spot and Duluth in fifth. Head coach Brad Frost said the rankings arenâÄôt something the team stresses. âÄúIt means absolutely nothing. ItâÄôs great to put out in press releases and send to recruits but the end of the year is when it really matters,âÄù said Frost. The rankings donâÄôt change how the team will approach their upcoming games. Sophomore Emily West said the team plans to have the same mentality as last weekend, which is to have a strong defense and put the puck in the net. âÄúJust because it is a different team doesnâÄôt mean itâÄôs any less important,âÄù West said. The Gophers host Ohio State (0-2-0, 2-2-0) this weekend at Ridder Arena. The puck drops at 7:07 p.m. Friday and 4:07 p.m. Saturday. Last weekend, Wisconsin swept Ohio State while the Gophers beat Duluth twice. In order to have the same outcome as last weekend, the Gophers hope to limit Ohio StateâÄôs scoring opportunities and do well on power play and penalty kill, Frost said. The focus for the Gophers this weekend will be on defense, said Marvin. âÄúWe have tremendous talent up front and we always expect a lot from our forwards,âÄù senior captain Gigi Marvin said . âÄúBut, defense is always the key. We played a high scoring offense in Duluth and we shut them down. If you shut them down, thereâÄôs no way that they can win.âÄù Included in the defensive-minded game plan are the goaltenders. First-year Alyssa Grogan will start in net tonight and sophomore Jenny Lura will take over Saturday night. Frost said both goalies are even in terms of skill and that is why they will continue to trade off. Lura was named National Defensive Player of the Week by U.S. College Hockey Online following her shutout against Duluth last weekend in her first complete game of the season. Marvin said each goalie has a different style of play and the team rallies around all of them. The goalie situation is indicative of the rest of the teamâÄôs internal competitiveness. Just because a player is on the roster, it doesnâÄôt mean they will get to play, West said. The team has been keeping each player competitive during practice in order to earn a spot in the line-up. âÄúEveryone goes into each practice knowing that they donâÄôt have a spot guaranteed,âÄù West said. âÄúEvery game day is an option for someone else to play.âÄù Overall, the team will focus on their opponents, not the USCHO rankings. âÄúPersonally, I donâÄôt really care about rankings at all. It doesnâÄôt matter what it says in the paper, it just matters how you play on the ice,âÄù Marvin said. âÄúActions speak louder than words.âÄù Rock Ridder Tonight, the team will host a âÄúRock RidderâÄù event in conjunction with Second Harvest Heartland, a local food shelf organization. Every fan who donates a nonperishable or canned food item will receive free admission. Fans who are not able to donate food can receive a $2 admission for the game. The University hopes to break its Ridder Arena attendance record of 3,251 fans, which was set in 2007. West said she hopes the food drive will draw a large crowd. âÄúWe always have the same people coming constantly. ItâÄôs always good to see people coming for a good cause with the food drive,âÄù West said. âÄúI think people that come that havenâÄôt come before will keep coming after this.âÄù Marvin said the team loves the support from the fans that are consistently at the game but that itâÄôs also always exciting to fill seats. âÄúAnytime we can get a lot of fans in the stands, itâÄôs a phenomenal experience,âÄù Marvin said.