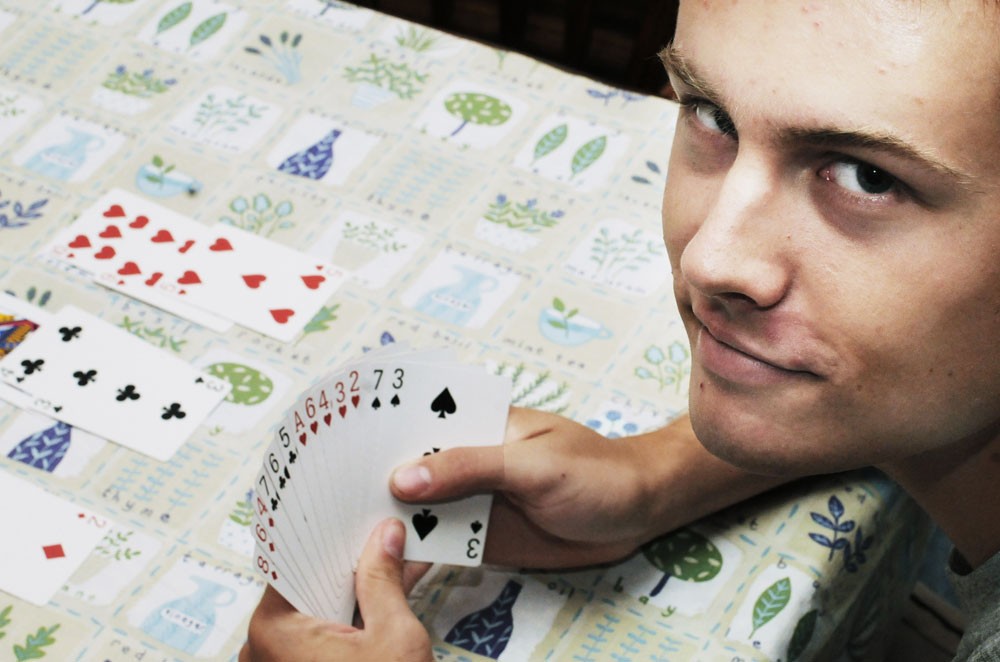 Bridge player Jake Olson is well aware that his competition is usually retired people, but the University pre-pharmacy sophomore finally got a chance to play the card game against his peers this July and walked away a national champion. âÄúMy friends give me crap,âÄù he said. âÄúThey say, âÄòIsnâÄôt that for retired people?âÄô or âÄòWhat is it like playing with old ladies?âÄô I say I like to make old people cry.âÄù Olson, who has only been playing bridge for two years, won the first-ever Youth North American Bridge Championships in July, held in Atlanta, along with partner Eli Jolley from Auburn, Ala. Because Olson normally partners with his dad or grandpa in local tournaments, he had to get a random partner to compete in the youth tournament, Olson said. OlsonâÄôs partner, Jolley, showed up only about five minutes before tournament play began, so Olson said introductions were short. âÄúWe had practiced online a lot, so we sort of knew each other,âÄù Olson said. âÄúBut it wasnâÄôt as weird as it would seem, meeting him in person for the first time.âÄù Jolley, a first-year student at Auburn University, said Olson was a bit different than his normal partner, who is 73. âÄúWe play good bridge together,âÄù Jolley said. âÄúWe just click.âÄù Patty Tucker , chairman for the Youth National American Bridge tournament, said she petitioned the American Contract Bridge League to hold the tournament to give younger players a chance to compete against one another. The tournament attracted 198 players, age 6 to 19, from 21 states and three Canadian provinces, Tucker said. âÄúThey beat out some tough competition,âÄù she said of Olson and Jolley. Aware that the majority of bridge players are retirement-aged, Tucker said she has worked with the ACBL to inspire young people to learn the game. âÄúBridge is one of the only games you can play that you will never know everything you need to know,âÄù she said. âÄúThere are billions of combinations.âÄù According to 2008 ACBL member demographics, 63 percent of members are age 60 to 75, while only one registered member is between the ages of 18 and 25. Two percent of registered members are between the ages of 26 and 39. To keep the tradition of bridge alive, Olson said more young people should learn to play, but it isnâÄôt an easy game to pick up. âÄúIt drives people away because you canâÄôt learn it in five or 10 minutes,âÄù he said. Modern bridge debuted in the 1920s and is played with a standard 52-card deck. Each player receives 13 cards and makes bids that determine the âÄútrump suitâÄù and how many âÄútricksâÄù will be won. Olson said he learned the game from his dad and grandpa and then taught himself more about it by reading books and practicing online. âÄúIt plays a lot on what I am naturally good at,âÄù he said. âÄúThere is a lot of math involved and a lot of logic reasoning.âÄù Beyond her chairman duties, Tucker said she works to get bridge programs started in Atlanta area schools, because research has shown that those who play bridge perform better on standardized tests than their non-playing peers. Felix Meschke, assistant professor of finance in the Carlson School of Management, said bridge has the same basic probability and psychology elements of poker, but probability plays the larger role in bridge, whereas psychology dominates poker. âÄúAs the game goes on, you can infer more and more information,âÄù he said. Meschke said bridge players tend to be analytical people. Famous bridge players include partners Warren Buffet and Bill Gates , along with many other well-known business leaders. Tucker said the game puts players elbow-to-elbow with a wide variety of people, ranging from politicians and businessmen to housewives and teachers. âÄúBridge transcends all the educational and economical backgrounds,âÄù she said. For Olson, bridge helps transcend generations, as he said it gives his grandpa and dad something to be proud of. Jeff Olson , JakeâÄôs dad, said playing bridge with his dad and his son online keeps them in touch, even when they are all in different places. âÄúWeâÄôre real proud of Jake,âÄù he said. Winning the tournament was a surprise, Jake Olson said, as his interest just started after watching his grandpa play. âÄúIt was nice to make people proud, represent Minnesota and my family,âÄù he said. âÄúThey were all really pleased.âÄù