D.J. Snelten will likely be picked in the first 10 rounds of the MLB draft. 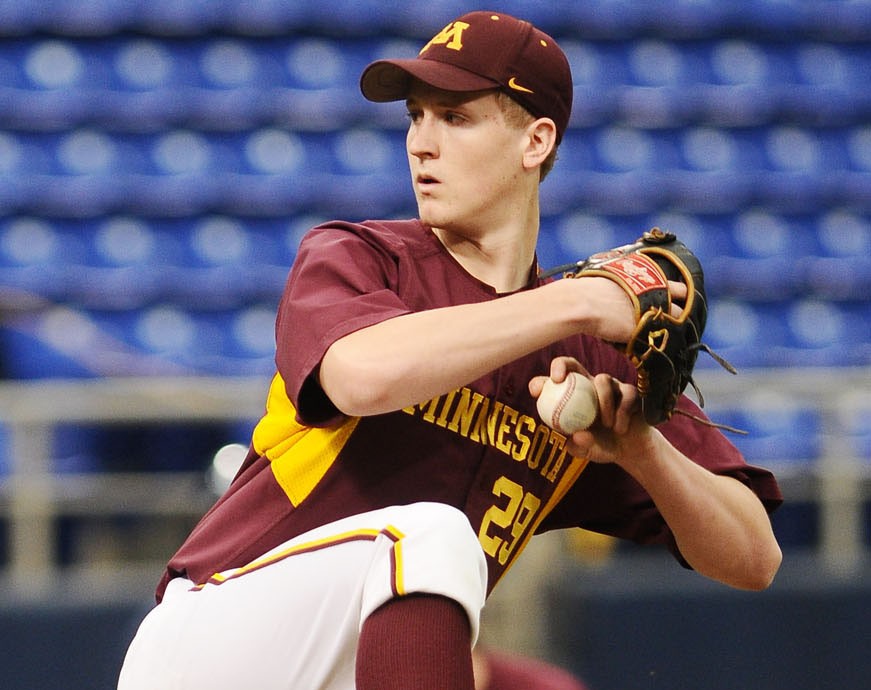 DJ Snelten pitches during Saturday evening's game against The Citadel at the Metrodome. The Gophers had a shutout victory with a score of 3-0.

DJ Snelten admits he has flown under the radar for most of his baseball career.

This season was no different. The junior lefty enjoyed a successful spring as the Gophers’ No. 2 starter, while ace Tom Windle dominated the headlines.

Both pitchers have attracted attention from scouts in the weeks leading up to the 2013 Major League Baseball draft June 6-8.

Snelten is Baseball America’s No. 141 prospect in the draft, and he’ll likely be selected in the first 10 rounds. He has an inherent advantage as a left-handed pitcher, as lefties are coveted at the next level.

Snelten called it “a blessing in disguise” that Windle attracted most of the media attention this season.

“It’s easy to get all caught up looking at clippings of yourself, but when there are less of them you spend more time working on the things you need to work on,” Snelten said. “It’s a lot easier to be more disciplined.”

That discipline has translated to success at the college level, especially in Snelten’s junior campaign. He finished 5-2 with a 2.15 ERA and 42 strikeouts this season.

Snelten missed the first month of the season with an elbow strain, but he returned to full form after that minor setback.

His season culminated with a clutch performance against Illinois in the final game of the regular season. Snelten scattered seven hits and didn’t allow a run over eight innings in a game Minnesota had to win to make the Big Ten tournament.

“DJ … came in as a kid that looked like he had great potential but had a lot of work to do,” said head coach John Anderson. “It’s been a work in progress for three years.”

Snelten’s repertoire features a fastball, changeup, slider and an occasional curve ball. His fastball tops out in the mid-90s, but he said he leans on his changeup to get out of most jams.

“That’s always been my bread and butter,” he said.

Though he has developed an “out pitch” with his changeup in his third year with the program, Snelten said he struggled to find the strike zone his first two seasons. He said a lot of his problems on the mound were mental, and he has worked to improve that aspect of his game.

Anderson recognized these struggles as well, and he said Snelten’s improvement with the Gophers has impressed him.

“He’s worked very hard at it,” Anderson said. “He’s elevated his game through hard work, and he’s gotten better both mentally and emotionally out there on the mound.”

Snelten was a 30th-round pick of the San Diego Padres in the 2010 MLB draft. He said he considered his professional options but chose to play for the Gophers.

Snelten didn’t succeed like he expected in his first year, though. He made four starts and boasted a 5.22 ERA.

“I came in cocky and thought that I knew everything about the game,” he said “I had some bad outings, and the game humbled me quite a bit.”

He said he’s tried to establish the right side of the plate and has used his head more on the mound since his freshman year.

Anderson said Snelten came to the Gophers as more of a “thrower” and has progressed into a “pitcher.”

“I went to the mound as a freshman and threw without a pitch or a purpose,” Snelten said. “I threw the ball and just hoped people would get themselves out. I learned over the years that I had to develop more of a plan with each batter at the plate.”

Snelten cited maturity as the reason he’s ready to play professional baseball. He said he’ll make the jump if he’s drafted in the first 10 rounds.

“It’s been a dream since I was a little kid to play professional baseball,” Snelten said. “I’ve matured in my three years with the Gophers, and I’m prepared physically, mentally and emotionally to compete at the professional level.”