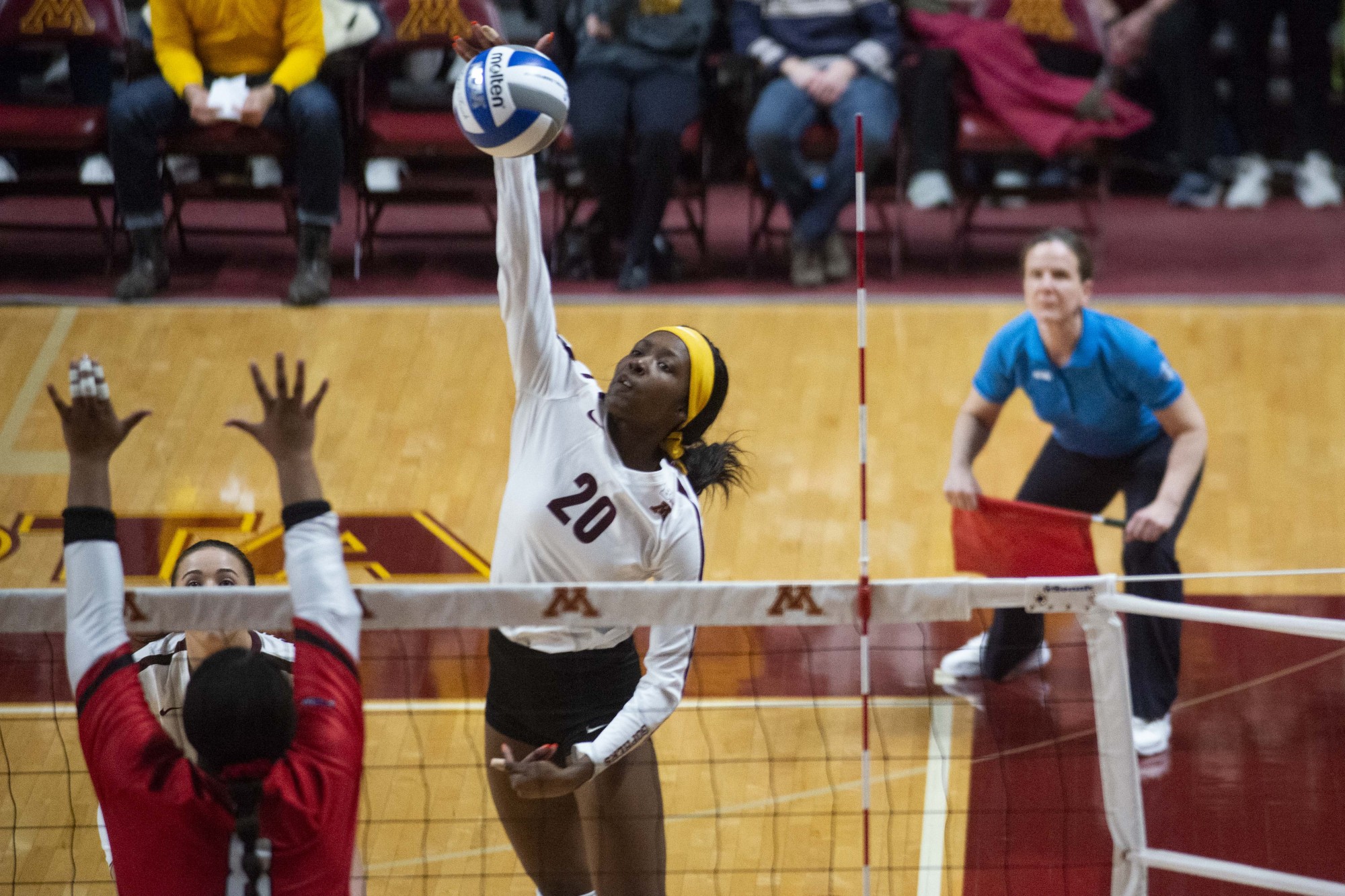 Outside hitter Adanna Rollins spikes the ball during the game against the Fairfield Stags in the first round of the NCAA tournament at the Maturi Pavilion on Friday, Dec. 6.

In that win, the Gophers hit .141, a large drop off from the .434 hit percentage they posted the night before. Regardless, Minnesota secured the win.

Conversely, the Gophers have ranked towards the top of the Big Ten defensively all season long.  First in blocks, and digs and second in opposing hit percentage, Minnesota’s effort on defense kept its season alive when when its offense sputtered against the Bluejays. Escaping with the win,  the Gophers turned their attention to a familiar opponent, No. 10 Florida, knowing they wouldn’t be playing much longer if the offense continued to lag behind. They answered McCutcheon’s call, posting a .331 hit percentage in the five-set victory.

When the fifth set came to a close, four Gophers had double-digit kills including outside hitter Adanna Rollins, who has led the way for Minnesota offensively and helped the offense get back on track.

She leads the team with 55 kills in the NCAA Tournament and also has 32 digs over that stretch. After their win over Louisville, in which Rollins led the team with 12 kills and was one dig shy of a double-double, she was named the most outstanding player of the Austin Region All-Tournament Team. McCutcheon called her performance “big time.”

“Not many people understand the weight you have to carry as a six rotation outside,” he said. “I gave her a hug afterwards, told her I was proud of her because I am. I think she’s come through a lot. She did a great job.”

In practice, Rollins has been working on her footwork, something she’s said has been “choppy at times,” but certainly hasn’t been throughout the tournament.

“I’ve been working on my footwork a lot in practice, just making sure if I mess up in the game I can just go back to the process. Make sure I know, I need to get my third step there or put my fourth step down,” she said. “Just those things have been helping me in my performance I think.”

To her teammates, her strong performances in the tournament are no surprise.

Rollins and McGraw have been stellar to this point in the tournament, but now find themselves in unfamiliar territory: the Final Four. They will, however, see a familiar opponent in No. 3 Stanford. The Gophers met Stanford in Minnesota’s sixth match of the year, a match the Gophers took 3-1 and was the third of a 10-match winning streak. McGraw and Rollins had 20 and 15 digs respectively in that match.

It may be a different Stanford team than Minnesota saw in that early season matchup, but the Gophers are ready to take on the defending national champions, an improvement from last season when they watched Stanford win it all in Minneapolis.

“It was good motivation. I even took a picture of the court and look at it here and there.”