At the NFL Honors Awards, celebrities and sportsmen bring their red carpet best

Awards at Northrop? While it’s snowing? Save our stilettos. 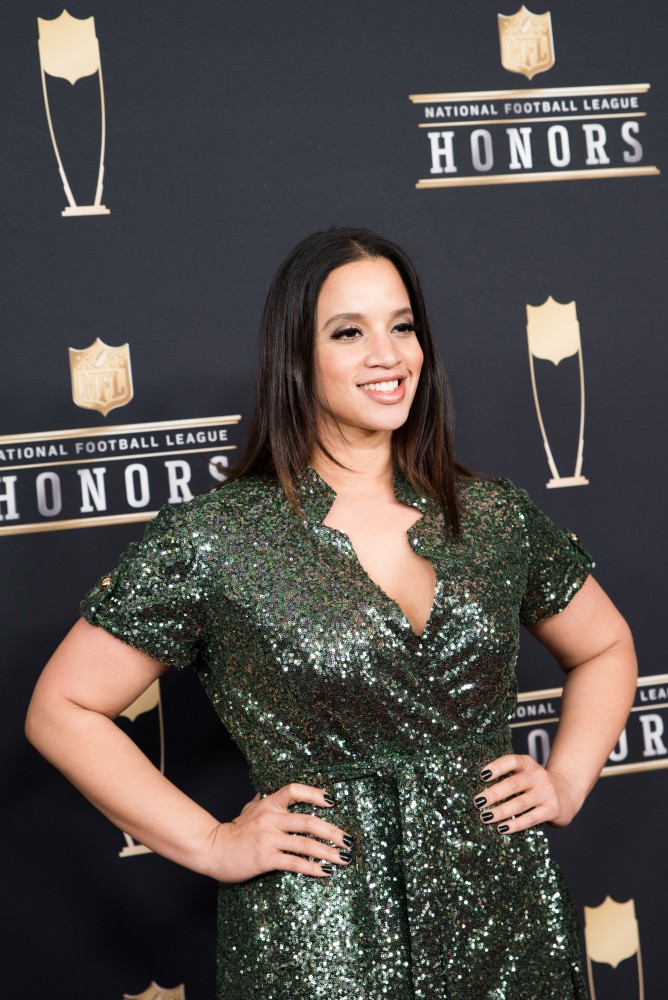 Dascha Polanco on the red carpet at the NFL Honors awards on Saturday, Feb. 3 at Northrop Auditorium.

How do you imagine a red carpet atmosphere? We think of a street in Hollywood right at peak golden-hour, covered in the kind of plushy fabric heels sink into.

This red carpet was located in the University of Minnesota mall. In a tent. At around 3 p.m.

Somehow, it looks like any other of its kind in photographs.

It was hot, and it smelled like it was hot. Our place on the red carpet was somewhere between E! News and the lovely men of NFL Canada’s social media accounts. That golden hour lighting? Huge spotlights angled overhead.

With snow billowing, host Kay Adams had to be carried in so she didn’t sacrifice her shoes. We trudged through the snow without help in our pointy boots (snakeskin and silver).

And though no one asked to take our picture, we can dole out our own awards. We must end the idea that black and brown don’t work well together. They absolutely do! Kamara’s luxe brownish red velvet jacket was intricately patterned and paired with black pants, a black bowtie and a crisp, classic white shirt. Winner!

The “Orange is the New Black” actress wore a sparkling emerald Pascal Millet number. It shone as she walked and somehow reminded us of warmer times while still maintaining winter-chicness. Multicolored gorgeous and glittery loafers — someone had to ask. There’s a chance of bias thanks to his role on Gilmore Girls as Jess Mariano, but wow — he is so nice! While being photographed, a little kid was waiting to walk past him. Ventimiglia stopped photos to say something like, “Go ahead, bud!” He also held his own glasses and flashed a peace sign.

Best quote: someone with a good idea

When planning the opening of the red carpet TV spot: “It would be cute if you were walking and acted like you wanted to stop and pose,” proving live TV is not real life.

After entering the world of red carpet memes last month, Emma Roberts showed up in a shiny black shift with her hair in a nice swoop. No more bad bangs!

A true campus celebrity couple! While they weren’t on the list of expected celebrities, the Kalers rocked the red carpet with Karen Kaler’s golden parka tucked neatly under her arm.

Probably tired from his Netflix documentary premiere at St. Anthony Main Theater the night before, Snoop Dogg was nowhere to be found on the red carpet. This is unfortunate, as we were hoping to ask him his favorite Prince song. We love a local tie and college kids love Snoop!

We saw a number of people pick lint off themselves and then ask someone to take a boomerang for them. They also had trouble figuring out where to put their jacket for a photo op and often just bunched it up in the corner. Celebs — they’re just like us!