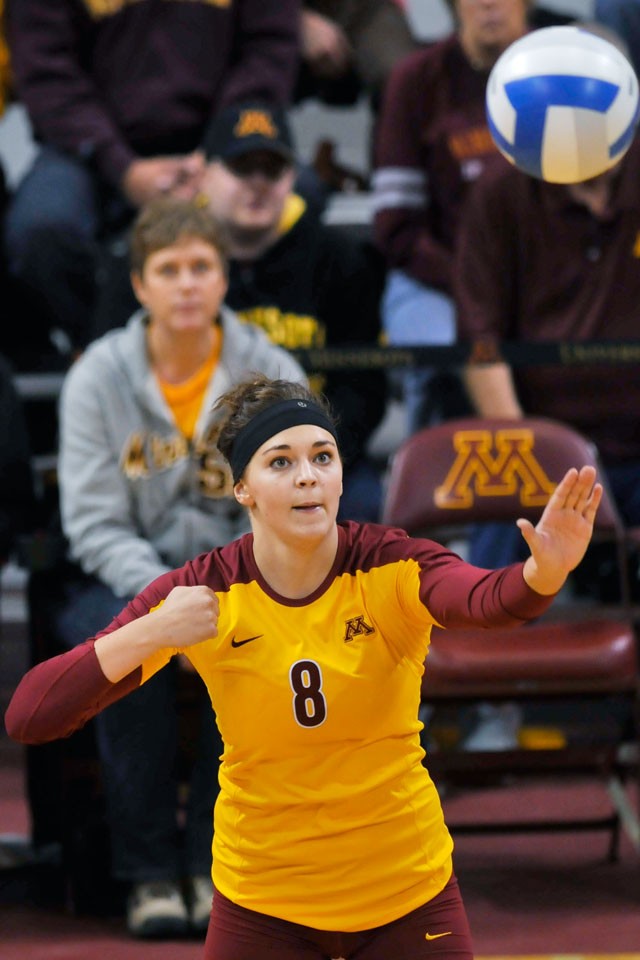 Just six matches stand between the No. 22 Gophers and a possible NCAA tournament berth.

Sitting at 18-8 and 8-6 in the Big Ten âÄî just two wins shy of eligibility âÄî a run in this yearâÄôs tournament would be the 12th appearance for the Gophers.

After a third place conference finish last year and a trip to the Final Four, this yearâÄôs road through the Big Ten has been a rocky, strenuous trip for the Gophers, detoured with season-changing injuries and rough road matches.

Currently sitting at fourth place in the Big Ten, the Gophers started the year off with an immediate setback, losing senior Hailey Cowles to an ACL injury during pre-season camp.

âÄúIf you can quantify things like court awareness and experience, we lost a lot because sheâÄôs been around for so long at all levels of play,âÄù head coach Mike Hebert said. âÄúShe just knows the game so well, she is able to radiate that on the court and other people pick up on it and their level of maturity increases.âÄù

While Cowles received a medical redshirt and hopes to return next year, her early exit left just one senior, middle hitter Lauren Gibbemeyer, remaining on the roster.

Gibbemeyer started the season on fire, helping the Gophers to first-place finishes in the Golden Gopher Invite and the Diet Coke Classic, where she picked up Most Outstanding Player honors.

But the Gophers ran into another diversion when Gibbemeyer broke a bone in her wrist in practice, keeping her off the court for five weeks.

With a deep, talented roster, it wasnâÄôt just GibbemeyerâÄôs skills on the court the Gophers missed as they dropped three important matches in her absence.

It was her leadership, a role the Gophers struggled to replace as the competitive Big Ten season wore on.

GibbemeyerâÄôs return has helped relieve some of the pressure for the Gophers, who lost another hitter, sophomore Katherine Harms, to an ankle injury Oct. 29. But with just six conference matches remaining, the squad is preparing for what might be the hardest stretch of their season.

Of the six teams left on the schedule, the Gophers have only beat two: Michigan State on the road and Wisconsin at home. The other four have all beat Minnesota this season and three rank in the top-15: No. 8 Penn State, No. 9 Illinois and No. 15 Michigan.

The race to the tournament starts this weekend when Minnesota hosts Michigan and Michigan State during back-to-back matches at the Sports Pavilion.

After taking a dominating 2-0 lead over Michigan on Sept. 25, the Gophers fell apart as the WolverinesâÄô rallied from behind, dropping a decisive five-set match to the 16th-ranked team.

This time around, the Gophers have the advantage of playing at home, where theyâÄôve lost only twice this year.

Hosting Penn State in the season finale Nov. 27, the Gophers wonâÄôt have to wait long to find out if theyâÄôll be playing in December. The NCAA Division I WomenâÄôs Volleyball selection show airs less than 24 hours later, at 2 p.m., Nov. 28 on ESPNews.